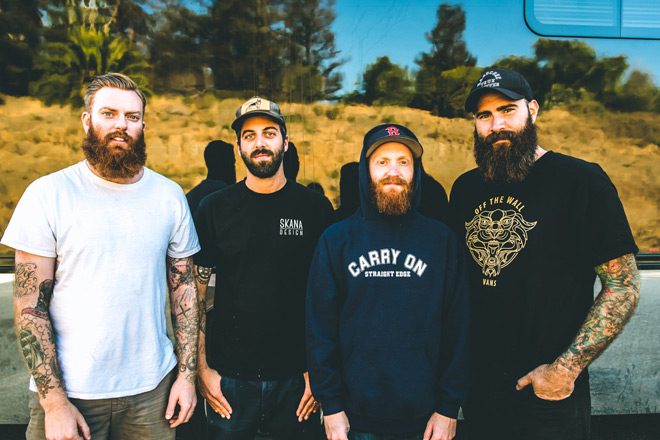 There is a certain humorous honesty in entitling your album Some of You Will Like This, Some of You Won’t, especially in a world of social media commentary that is more oft fierce and animalistic than it is forgiving or sincere. Points to Four Year Strong for having the balls to not play games! Their new album – a collection of rarities, unheard originals, and reimagined favorites – hits eardrums on Friday, September 8th through Pure Noise Records.

Four Year Strong hail from Worcester, Massachusetts where they formed in 2001. With six albums to their credit – from 2005’s It’s Our Time to 2015’s Four Year Strong – these boys have been steadily building a dedicated fanbase in the Pop-Punk community. Of course, touring does not hurt that cause either, and these guys have shared stages with literally everyone – from New Found Glory to Every Time I Die, All Time Low, Blink-182, Bring Me The Horizon, Pierce The Veil, Paramore, A Day To Remember, and Dance Gavin Dance.

Known for their quirky sense of humor, Four Year Strong – Dan O’Connor, Alan Day, Jake Massucco, and Joe Weiss – have returned with the twelve-track, mostly-acoustic and rarities collection – that does indeed include brand-spanking-new material, yes – Some of You Will Like This, Some of You Won’t. The album kicks off with the self-deprecatingly titled “It Must Really Suck To Be Four Year Strong Right Now,” originally appearing on 2010’s Enemy of the World. With a lovely acoustic guitar intro and the dueling vocal work of O’Connor and Day, this is a beautifully gentle retelling that kicks in at its very end. You know you have to sing-along to such lyrical wisdom as “But since your head’s in the clouds / The best advice I found is don’t look down!”

The 2007 album Rise or Die Trying is represented with “Heroes Get Remembered, Legends Never Die,” which – despite the original’s frenetic fun pace – actually sounds as though it was always meant to be presented in the acoustic format. Whisper soft vocals repeat: “Sad enough to say that alone I can barely light a match, but together we can burn this place down.” Meanwhile, the band’s most recent offering – 2015’s Four Year Strong – sees a solid representation in a duo of tracks: “Go Down In History” and “We All Float Down Here.” The first is a brilliant reimagining that is both whimsical and magical, while still maintaining a solid dose of grit. Meanwhile, the acoustic jamboree of the latter track is on par with something worthy of, say, Mumford and Sons. Raining on someone’s parade never sounded quite so delicious!

The brand-spanking-new track “Nice To Know” contains gentle electrics that place the emphasis on the emphatically passionate vocals of O’Connor and Day, whose harmonies are delicious, as is the guitar solo here. “It’s just nice to know that you’re not alone,” the boys sing in a track that is an uplifting and positive affirmation, and perhaps a promise of future positivity to come? Whatever the case, it flows beautifully into ‘oldie’ but goodie, “Who Cares?” The track retains much of its Pop Punk feel and, of course, remains fully infectious.

Another new track, the gently electrified “Let Me Down Again,” is beautifully haunting with meandering New Wave-esque guitar work that sets a nostalgic mood. If this is the direction that Four Year Strong are heading, it is brilliant! More, more, more! Afterward, they return to old-school favorites with “Stuck in the Middle,” off 2011’s In Some Way, Shape or Form. You can practically see the guys perched around the campfire, jamming out to this superbly catchy sing-along that is a must-hear for fans new and old.

“Abandon Ship” (originally “Abandon Ship Or Abandon All Hope”) is suitably melancholy in its acoustic retelling while the oldest throwback on the album, “Your Ego Is Writing Checks Your Body Can’t Cash,” is a superbly catchy little acoustic retelling of a song entitled after a Top Gun quote. Another 2005 track, “This Summer Session” stays fairly-close to its original, while the boys end with new track “For Our Fathers,” a beautiful acoustic duet that highlights the talents of these amazingly melodic men. 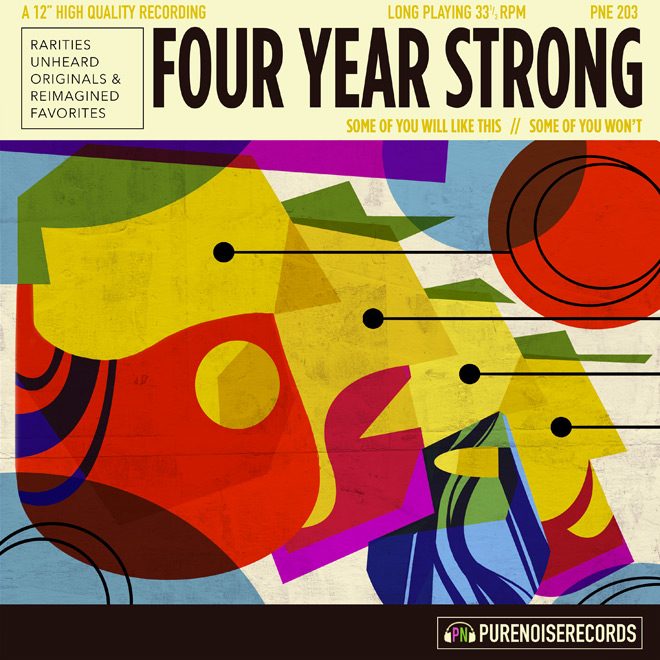