Fright Night takes a bite out of horror movie history

Before there was sparkling vampires, vegetarian vampires, and Kirsten Dunst was a mini devil, there was Fright Night.  Released in movie theaters across America on Friday August 2nd, 1985 Fright Night has blazed a historic story in the horror genre record books.  Considering a turning point in director/writer Tom Holland’s career, who went on to co-write and direct Child’s Play in 1988, the film also features an all-star cast of actors. Led by Williams Ragsdale as Charlie Brewster, Chris Sarandon as Jerry Dandridge, Amanda Bearse as Amy Peterson, Roddy McDowall as Peter Vincent, Stephen Geoffreys as Edward “Evil Ed” Thompson, and Jonathan Starks as Billy Cole, Fright Night brought together respected veterans with budding young talents to work on the film.  Going into production in December of 1984 and completed by February 1985, the film was merely an afterthought in the mainstream until its surprising late summer buzz when in the opening weekend of August 1985 grossed $6,118,543.  Going onto grossing a total of $25,000,000, Fright Night was the second highest grossing horror film of the year right behind decade dominating franchise A Nightmare on Elm Street’s second installment Freddy’s Revenge.

A classic in its own time, Fright Night is a fun flick about misfit teen Charlie Brewster who believes his next door neighbor, Jerry Dandridge is a blood sucking, soul stealing, evil in the night vampire. Upon telling anyone in hearing range, it comes as no surprise that no one believes him. After seeing Jerry and his roommate Billy Cole sneak a coffin into the basement, and seeing prostitutes in Jerry’s house one night then on the news reported dead the next, Charlie’s suspicions grows.  His new obsession begins to worry his girlfriend Amy and friend ‘Evil’ Ed Thompson.  Even if Charlie just gets laughed at, Jerry does not appreciate the trouble Charlie has been causing him and vows to kill the stubborn teenager, making Charlie regret opening his mouth to begin with. When Jerry kidnaps Amy, Charlie has no one else to call on but “The Great Vampire Killer” Peter Vincent. After a bit of convincing, Peter joins forces with Charlie to rescue Amy, kill Jerry and end his reign of  terror over the neighborhood. 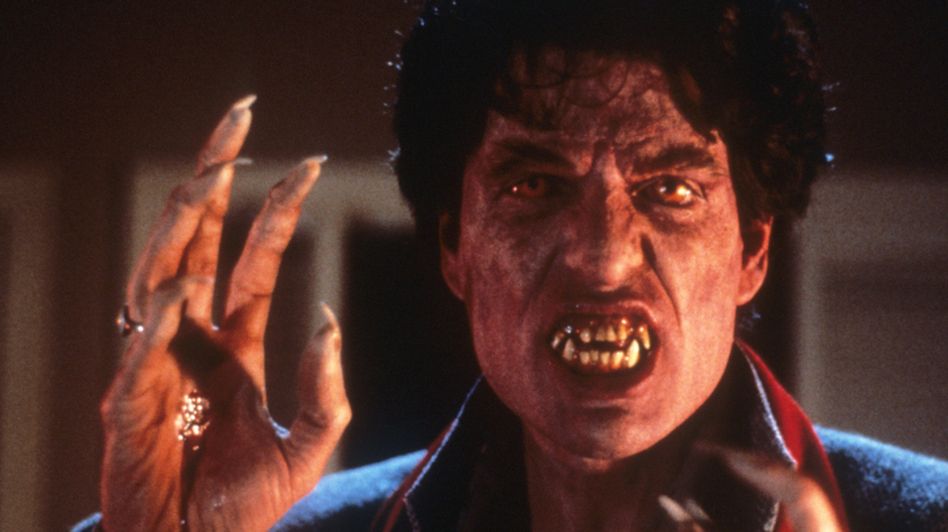 With strong acting, good humor, and a compelling story, Fright Night is a great film that has withstood the test of time.  Stellar special effects, the blood spatters, prosthetics, and use of camera all create a gruesome and convincing masterpiece which not only was inventive but paid homage to horror cinema iconic stars like Vincent Price and Peter Cushing.  Creating the perfect atmosphere was wonderfully composed music by Brad Fiedel, along with songs from top artists of the time, such as Devo and Autograph, that was featured in the film’s club scene.  The soundtrack has been out of print for many years making it a rare treasured find for collectors and selling for lofty prices on eBay. 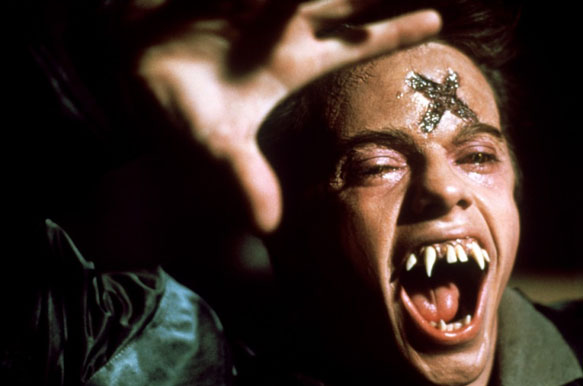 Fright Night’s impression did not stop in 1985 though.  It spawned a sequel directed by Tommy Lee Wallace in 1988 which although not as commercially successful as the original developed a cult following on home video over the years.  Like so many other horror films of the era, in the 2000’s a remake of Fright Night came into play. After years of speculation in 2011 Fright Night’s remake was released receiving a favorable response from fans of the original and the younger generation while drawing in $7,714,388 on its opening weekend.  Not stopping there, Fright Night 2: New Blood was remade as well and received a straight to video release in 2013, proving the franchise name is still alive and sucking blood until the last drop in the new millennium. 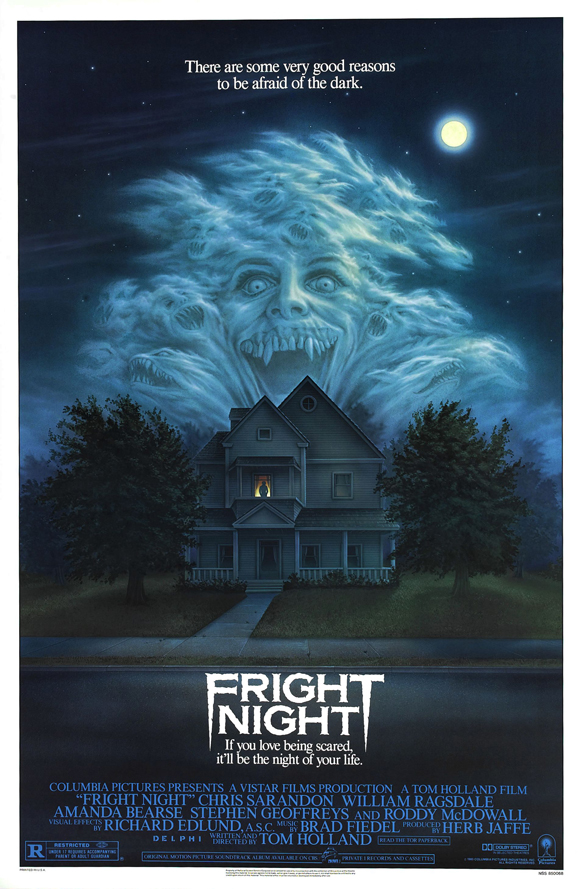 Purchase a copy of Fright Night on DVD here.

Read an exclusive interview with Stephen Geoffreys on CrypticRock.com here