From Beyond – 30 Years of Easy Prey 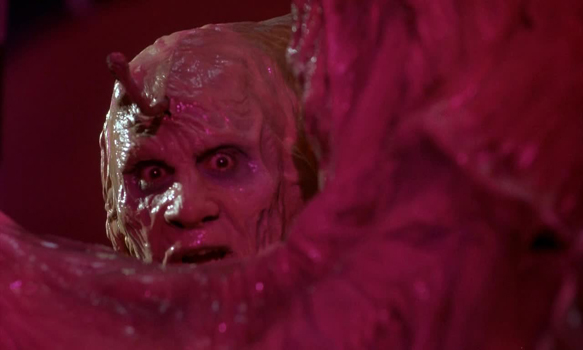 Dr. Edward Pretorius (Sorel), has created The Resonator, a machine that lets you see beyond space and time through stimulation of the pineal gland. His assistant, Crawford Tillinghast (Combs), makes the final calculations and turns on the machine at quarter power. The Resonator encompasses the room in bright purple light and creatures start swimming through the air. Suddenly, one attacks Crawford, and he turns off The Resonator, making all the creatures disappear. He runs to Pretorius, who turns on The Resonator to full power to Crawford’s shock and terror. Something comes from beyond and eats Pretorius’ head. Crawford is arrested and sent to a mental facility in the care of the slightly sinister Dr. Bloch (Purdy-Gordon) because of what he said happened. Dr. Katherine McMichaels (Crampton) visits Crawford at the facility where he is remanded into her custody so she can properly diagnose his possible schizophrenia. In order to do that, they need to recreate the experiment. A cop, Bubba (Foree), is assigned to Crawford and McMichaels to keep her safe. Once they are at the Pretorius mansion, Crawford repairs The Resonator and turns it on, but none of them are ready for what lies beyond.

Shot from January to April in 1986 at Empire Studios in Rome, Italy with an estimated budget of $4.5 million, the location was chosen due to it being much cheaper than in the United States. In fact, it was estimated it would have cost around $15 million to produce the film in the US. From Beyond, like Re-Animator before it, is a H.P. Lovecraft story. For the uninitiated, H.P. Lovecraft created Cthulhu and delved into the horrors of early twentieth century science, death, and cosmic beings from beyond space and time. Though, as with a lot of Lovecraft’s stories, “From Beyond” was very short at just seven pages, meaning Gordon and company would have to add a lot to make a ninety minute film. All the events that happen before the opening credits is the H.P. Lovecraft “From Beyond” story. 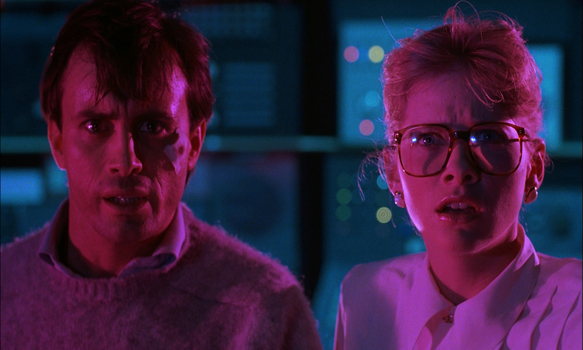 Stewart Gordon captured lightning in a bottle with Combs and Crampton in Re-Animator, and he wanted to continue working with them. However, the studio came close to blocking Crampton from the part of Dr. McMichaels, because they thought she was too young to be believable as a seasoned psychologist, but Gordon insisted and she was eventually cast. McMichaels was written as a sort of “girl-wonder” using radical experiments in trying to cure schizophrenia. The villainous Dr. Bloch (Purdy-Gordon), named for the writer of Psycho (1960), refers to her as “the girl-wonder” on several occasions, but not in a respectful way. From their first meeting, there is a professional cattiness between McMichaels and Bloch with the latter seething with jealousy at McMichaels’ notoriety, and also with the way McMichaels seemingly uses her patients as “Guinea Pigs.” When things go south, McMichaels is put into the custody of Dr. Bloch, who takes malicious glee in her new found position as the boss and immediately signs McMichaels up for shock treatment.

As for Jeffrey Combs, he is Jeffrey Combs always, and forever. The man is a severely underrated actor. He brings such emotion and drama to the part of Crawford Tillinghast, much like he did to Herbert West in Re-Animator, but at a different end of the spectrum. In Re-Animator, he was a mad scientist, but in From Beyond, Combs is the victim. Ted Sorel’s “Dr. Pretorius,” who was named after Victor Frankenstein’s rival in 1935’s Bride of Frankenstein, was the maniacal genius behind The Resonator, who became consumed by the thing from beyond. Once the thing had Pretorius’ brain, it gained ultimate power over reality. Finally, Ken Foree’s “Bubba” was the comic relief and the voice of reason.

The special FX department consisted of thirty-one people, but most notably John Carl Buechler (Troll 1986, Bride of Re-Animator 1989), Robert Kurtzman (Army of Darkness 1992, From Dusk Till Dawn 1996), Greg Nicotero (Evil Dead II 1987, In The Mouth Of Madness 1994), and Mark Shostrom (The Mutilator 1984, Evil Dead II 1987). The FX were great for the time, but some, like the superimposed swimming creatures, the full-body Pretorius animatronic, and the superimposed flying bug, do not hold up particularly well, but they still display impressive craftsmanship. One effect in particular that does hold up is the giant, toothed worm in the basement that looks like a precursor to the giant Freddy Krueger Worm in 1987’s A Nightmare on Elm Street III: Dream Warriors. All of the creatures seem to be at home in the realm of H.P. Lovecraft’s slimy, tentacled, descriptions. 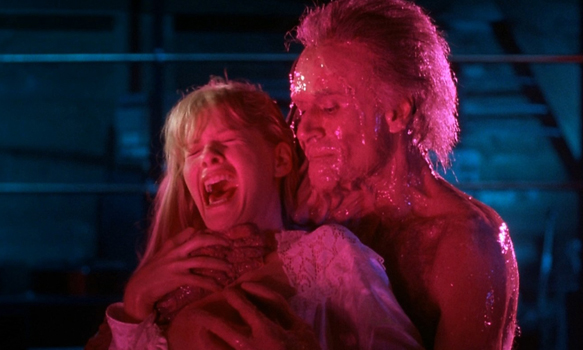 From Beyond was met with ire from the MPAA and Stuart Gordon was forced to make cuts to S&M footage and gore to allow it to be R-rated. In 2013, MGM released the uncut version of From Beyond to DVD, which included these excised sequences, most notably, the scene where Crawford sucks Dr. Bloch’s brains out through her eye socket in gory detail. Another scene that was trimmed was when Katherine bites off Crawford’s protruding pineal gland. It was not even that bad, but the MPAA loved taking even the smallest amount of gore out films. All this said, even after thirty years, From Beyond is a fantastic Horror film, standing the test of time. 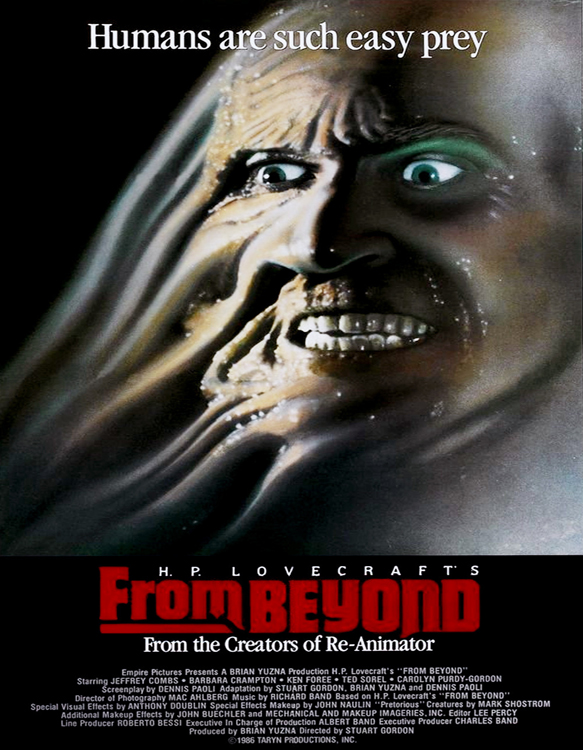 Purchase From Beyond on Blu-ray/DVD on Amazon