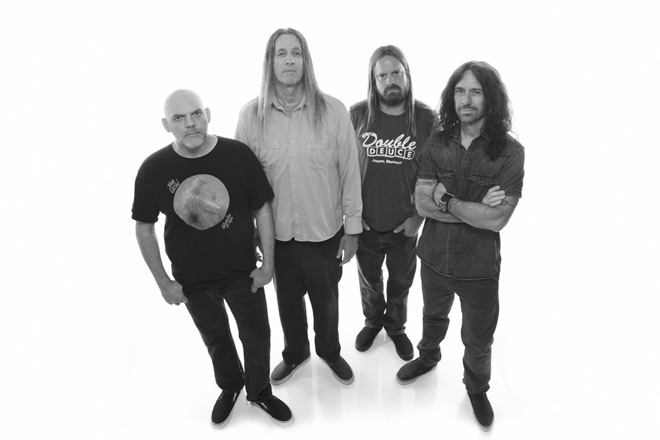 Stoner Rock legends Fu Manchu are at it again with Clone of the Universe, set for release on Friday, February 9, 2018 through the band’s own label, At the Dojo Records. Formed in 1990 from the ashes of a Hardcore Punk band, the first decade of Fu Manchu saw lineup changes with nearly every release and tour. The current lineup of Vocalist/Guitarist Scott Hill, Guitarist Bob Balch, Bassist Brad Davis, and Drummer/Percussionist Scott Reeder has been steady since 2002, and the band has been in a healthy cycle of 30-something minute albums supported by blistering live shows.

Nearly four years have passed since their last record, Gigantoid, and the band spent part of that time touring North America and Europe while also celebrating their 25th anniversary. Clone of the Universe brings seven brand-new tracks, the highlight of which is the massive closer “Il Mostro Atomico,” a track which earns its name by eating nearly half of the total runtime while also featuring legendary Rush Guitarist Alex Lifeson.

“Intelligent Worship” wastes no time as its opener, with the seasoned beatings of Reeder opening a sonic hole wide enough for Balch and Hill to shred their way into the picture. The distinct vocal stylings of Hill are at their usual strength here, falling somewhere between monotonous and disembodied, both in a good way.

“(I’ve Been) Hexed” is quick paint-by-numbers Stoner Rock, with fuzzy guitar peppering staccato riffs that drive home the hypnotic vocals of Hill; the title could easily describe the state of fans after listening to the unique and effective stylings of the band’s vocalist. The track stands in stark contrast to follower “Don’t Panic,” whose title and lyrics belie the frantic pace of the overall track. The pace slows again with “Slower Than Light,” which begins with a creeping pace that might better fit one or two aisles over in the doom section. After a few minutes pass, Davis plays the band into a frenetic pace that helps close the track.

Any trace of speed is left behind again with “Nowhere Left to Hide,” which mixes plodding drums and desperate vocals on top of more of the band’s signature fuzzy guitar tones. At times, Hill is left to repeat near-incantations as the band drags behind him, putting the point home with some well-timed soloing. The title-track continues the up/down tactic with alternating vocals and guitar, with a near-whispered chorus playing over the guitar stylings of Balch and Hill; the guitars eventually abandon the vocals completely as the approach of “Il Mostro Atomico” becomes impossible to ignore.

The band closed their previous record with “The Last Question,” clocking close to eight minutes of space-prog. They double down here with “Mostro,” over eighteen minutes of nearly instrumental stylings – a hurried verse at the halfway point, its last line repeated, take care of the vocals. Broken down into four manageable sections, the track still marks a bit of a departure, not just from the rest of Clone of the Universe, but from the band’s catalog as a whole, but the change works, not the least of which is due to the intense work of guest Lifeson.

The lines between Prog, Stoner, Fuzz, Desert, and other genres in this section of the record store can blur somewhat, but Fu Manchu manage to branch out while still keeping true to their roots. Even “Il Mostro Atomico,” without using the easiest tool in the box, the instantly recognizable voice of Hill, still fits into the catalog of a band with nearly thirty years of riffs and gigs in their logs.  A strong collection of songs featuring wide ranges in tempo, lyrics, and styles, capped off by the strange trip of “Il Mostro Atomico,” CrypticRock gives Fu Manchu’s Clone of the Universe 4 out of 5 stars. 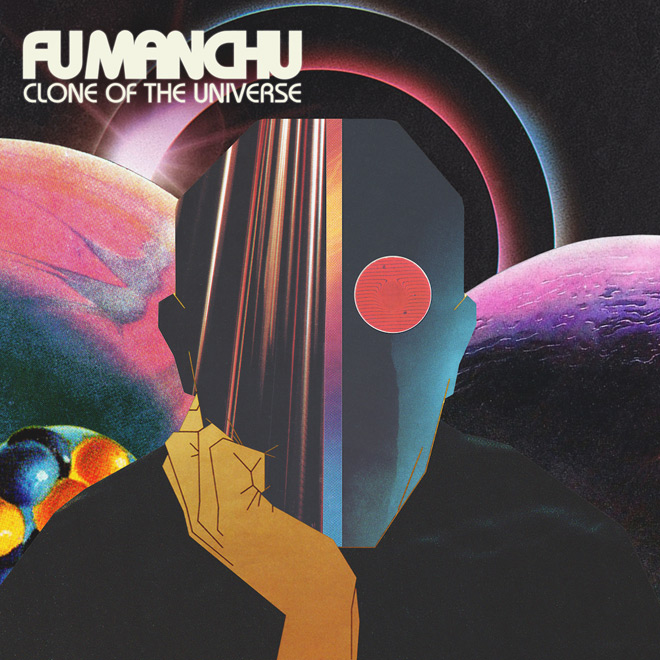 Purchase Clone of the Universe: