Dystopian future-worlds, self-aware technology, zombies, aliens, and black holes. Quite a mix right? Well, those who enjoy this type of smorgasbord are in luck with the new film Galaxy of Horrors, which has it all. Compiled by Justin McConnell (Skull World 2013, Minutes Past Midnight 2016), Galaxy of Horrors is a compilation of eight Horror/Science Fiction short films (nine, if you count the wraparound story) that will leave viewers side-eyeing their iPhone and checking their loved ones for brain implants.

Released on VOD as of March 7th, Galaxy of Horrors opens with a space traveler named Mr. Brown (Adam Buller: Broken Mile 2016, Do You See What I See? 2016) locked in a cryo-pod, futilely arguing with his HAL-esque on-board computer in what will be the contiguous thread that ties the collection of short films together. Despite the trapped traveler’s attempts to shut off the “complimentary entertainment system,” he is forced to watch film after film as his life support system dwindles in the lonely reaches of space. 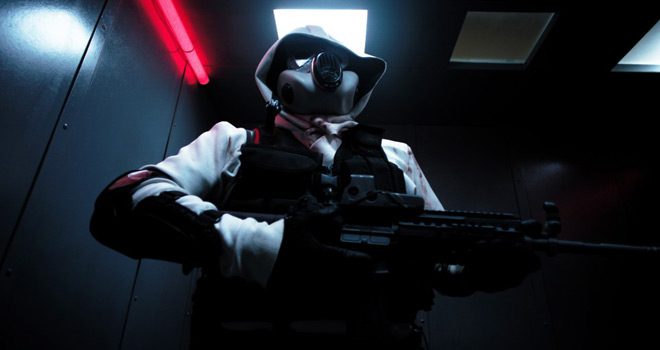 The opening film, Eden, written and directed by Todd Cobery (In An Instant 2016, True Monsters 2015), drops the viewer into a dark neoworld where a corrupt government struggles to maintain control of Eden, the terrorism-plagued land formerly known as the U.S.A. The air in Eden is unbreathable, turning the unlucky exposed into flesh-eating vampire-zombies. With themes of dishonest leadership, environmental ruin, and organized world terror, Eden probes the extremes to which humans will go to grasp order from anarchy. If you enjoy films in which everyone wears a cool mask and carries a gun, this one is for you.

The film that follows is Iris. In this one, Director Richard Karpala (Deadbox 2012) spins an all-too-plausible tale of a highly intelligent smartphone app called Iris. When an amoral wrongdoer attempts to use Iris’s features for evil, we find out just how judgmental a program can be. Iris asks the question: Will our technology always be on our side?

Next up is Ethan Shaftel’s (Extravaganza 2017, Suspension 2008) Flesh Computer, a gritty and grotesque exploration of the melding of synthetic and organic. A mad scientist of sorts, nicknamed Handyman (Rob Kerkovich: Cloverfield 2008, VirtuaGirl 2007), maintains a fleshy experimental conglomeration of circuitry in a dilapidated building while a background documentary examines the nature of consciousness. An accidental run-in with a pair of hedonistic goons threatens to compromise his creation and the handyman must take action. Lucky for him, he gets help from a powerful ally. 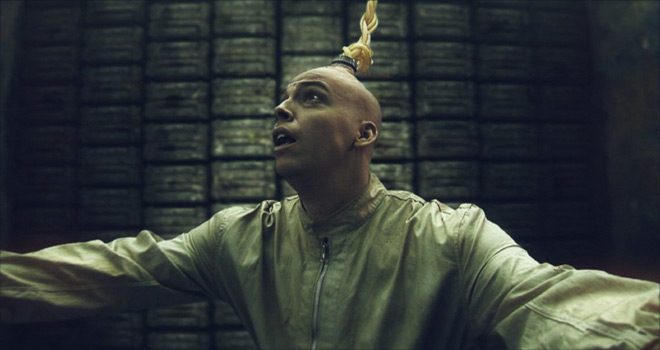 Pathos is the Italian-born nightmare that follows, plumbing the grimy depths of virtual reality in a dystopia in which nothing is free. How much would you pay for pure emotion? If you could experience the feeling of love at first sight, the pride of ruling a nation, or the satisfaction of fulfilling your most personal fantasy, would you imbibe, even knowing it was an illusion? Pathos begs these questions through the plight of a man (Fabio Prati: debut film) trapped in a bleak VR cell, struggling desperately to come up with the funds to pay for one more “experience.” When his credit runs out, his real world experience is not at all pleasant.

Eveless is next, directed by Antonio Padovan (All Hallows’ Eve 2 2015, Once Upon a Time, Inc. 2013). At just seven minutes, the short is a gruesome glimpse into the limits of human scientific ingenuity during a time in which females are no longer being born. This one is not for new parents.

The sixth short film in the collection is They Will All Die in Space, a slow burner with a twist in which a spaceship full of cryogenically frozen passengers has broken down in deep space and lost communication with its headquarters. Alex Talabot (Julio Perillan: Realive 2016, Anomolous 2016) is awakened by the two-man crew and given the task of repairing the defective ship. He soon finds out just how much his life depends on his success.

Science can only speculate on what it would be like for a human to fall into a black hole, but where there are gaps in science, there are Science Fiction films like Entity (2014), directed by Andrew Desmond (debut film). While out on an untethered space walk, an astronaut (Alius Hilsum: Food Elle 2012, Lives and Walls 2009) witnesses the destruction of her spaceship and finds herself hopelessly drifting through the void with a depleting life support system. After passing out, she awakens to find herself staring into a black hole. The special effects are gorgeous in this fifteen minute face-melter that hurls us to the brink of the imagined universe. 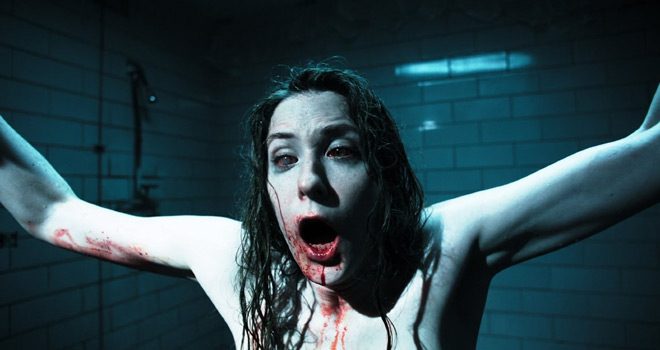 Rounding out the compilation is the German Alien thrill ride Kingz, written and directed by Benni Diez (Stung 2015, Melancholia 2011) and Marinko Spahic (Melancholia 2011). Two drug dealers, Olli (Olli Banjo: debut film) and Mathis (Mathis Landwehr: Darth Maul: Apprentice 2016, V for Vendetta 2005), enter a gritty electroclub to complete a drug sale to the mysterious Luca (Bela B.: The Three Robbers 2007, The Edelweiss Pirates 2004). Little known to the duo is the sinister nature of Luca’s club. Think The Matrix (1999) meets Invasion of the Body Snatchers (1978) in this action-packed short that gives new meaning to ‘identity theft.’ 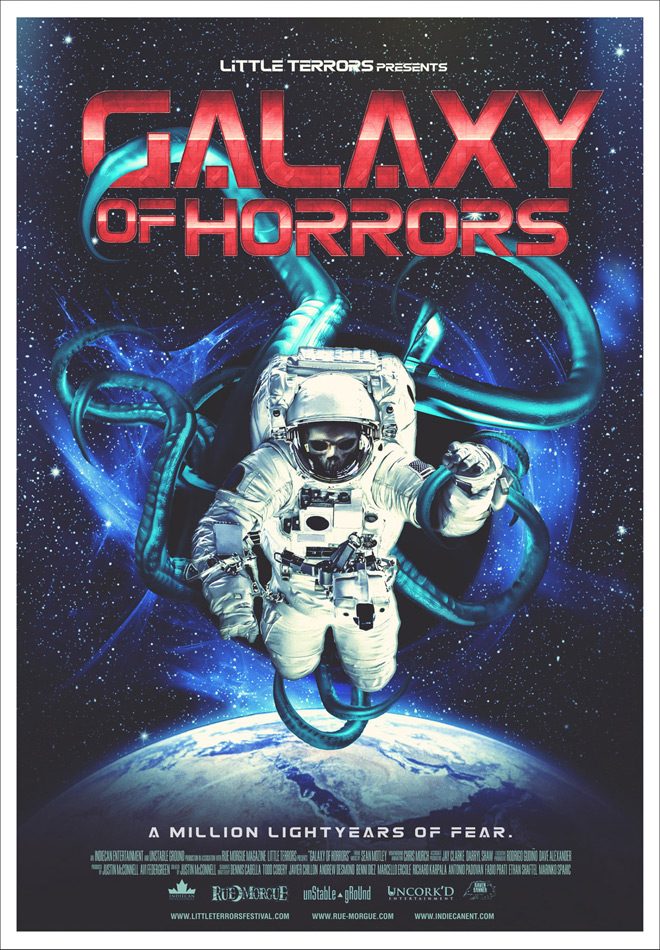 Old (Movie Review) It Came from Below (Movie Review)
Like the in-depth, diverse coverage of Cryptic Rock? Help us in support to keep the magazine going strong for years to come with a small donation.