After a roller coaster of emotions and near heart attacks at the fear of Jon Snow dying once again, HBO’s Game of Thrones delivered one of its most action-packed and riveting episodes to date. The penultimate episode, Battle of the Bastards, proved to be more than just a face-off between Jon Snow and Ramsay Bolton and gave the sweet revenge viewers have been hoping for. If the theories are to be believed that Jon is both a Stark and Targaryen, this episode seemed to have pushed that theory even further. Fans not only see Jon’s epic showdown, but also Dany’s claim over Meereen. Both fire and ice are represented and parallels between the two possibly related characters are evident in the fact that both experience a rebirth. 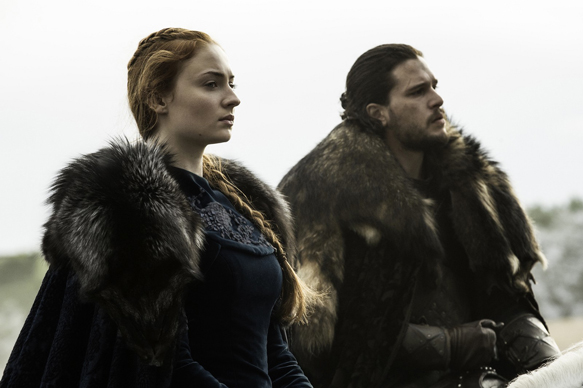 Before Snow vs. Bolton happens, we start the episode in Meereen, which is under attack by the slave masters. Dany is not happy with Tyrion’s deal, which the slave masters expectedly violated. Tyrion defends his plan for peace, but Dany is ready to fight fire with fire.  Tyrion, noticing Dany’s thirst for blood, reminds her of her father and how his solution to an invading army was to “burn them all.” He urges Dany to try a different approach, and so Dany, Tyrion, Grey Worm, and Missandei meet with the masters to discuss terms of surrender. Dany, exuding more confidence than ever, brushes off the slaver’s assumption that they are meeting to discuss her surrender and tells them, “My reign has just begun.” The slaver’s cockiness waivers immediately when Drogon shows up and Dany mounts her majestic dragon and rides off while her other two dragons follow.

The next sequence is done beautifully as the audience feels like it is in flight with Dany as she rides Drogon. It is also clear her connection to the dragons is fully realized as she utters the command, “dracarys,” and the dragons begin to burn the slave masters’ fleet.  Meanwhile, Dany’s newly recruited Dothraki army comes charging to kill the Sons of the Harpy on the streets of Meereen. Tyrion then gives the soldiers that are accompanying the masters a chance to leave, which they all do. The masters do not get away so easily, with only one left alive after Grey Worm slices the throats of the other two.

Things just keep looking up for Dany once Theon and Yara arrive with all their ships. The Greyjoys try to appeal to the mother of dragons, but Tyrion remembers how mean Theon once was to him and is more snarky in his communication. The flirtation is real! Dany and Yara have a lot in common, like crappy dads and trying to rule without power-hungry men getting in the way. Being a strong woman is hard and their connection is obvious, which means some newly christened Dany/Yara shippers are probably already creating memes of this scene. Once Dany is assured the Greyjoys are not after the Iron Throne and just want to reclaim their home from their uncle Euron, who would require marriage as a contingency of his deal with Dany, she agrees to strike an alliance. Independent ladies need to stick together, after all, but first Dany makes the Greyjoys promise that the Iron Islands must stop raiding and raping. Yara is hesitant at first and it is Theon who gives her the nod to agree. Dany has a new vision for Westeros and now Theon and Yara are on board. 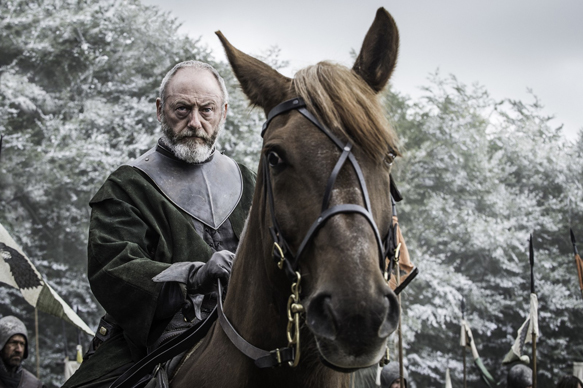 With Dany securing her forces and looking like nothing can stop her, they move to the North. Before they redefine the word “slay,” the bastards meet for a talk. Ramsay is uber-confident because he knows Jon does not have the numbers to take down the Bolton army, so he tries to negotiate, telling Jon to simply give him Sansa and he will show mercy. Jon, instead, challenges Ramsay to settle this with a one-on-one combat between the two so that no one else needs to die. Ramsay may be evil, but he is not stupid. He knows Jon is a master swordsman and decides to play the Rickon card by showing Jon and Sansa Shaggydog’s severed head. Ramsay, always playing head games, notes that his hounds have not eaten in a week and asks which part of Jon’s men they will eat first. Sansa then ends the conversation simply by saying, “You’re going to die tomorrow, Lord Bolton. Sleep well,” and then rides off.

Time for a strategy meeting. Everyone seems to have a different opinion about what to do, but Sansa tries to convince Jon, after he hears everyone’s input but hers, that she knows Ramsay better than anyone and that he is a master at playing games. This is a man that can see a trap from a mile away and Sansa basically tells Jon he knows nothing. Jon’s concern is saving Rickon while taking Ramsay down, but Sansa tells Jon there is no hope for Rickon because Ramsay will not let him get out of this alive. This scene is particularly frustrating because it is clear Sansa wants to tell Jon about her letter, to who we assume is Littlefinger, but she holds onto that vital piece of information, most likely because her main goal is to see Ramsay fall, and she feels she cannot trust Jon to sacrifice Rickon’s life to make that happen. It is a moment that shows how cunning Sansa has become, but also shows how much she has shed the naiveté of her past when she tells Jon, “No one can protect me. No one can protect anyone.”

In an episode full of intensity, there needs to be some levity and this is given in the form of Davos and Tormund, who could easily have their own spin-off show. They share a great moment where they discuss their previous belief in kings and point out that Jon Snow is not a king, which brings a smile to their faces. Tormund goes off to get drunk on sour goat’s milk (war preparation is weird) and Davos decides to go for a walk since he cannot sleep before battle.

Meanwhile, Jon goes to speak to Melisandre. He asks her not to bring him back if he dies again, but she tells him she only takes orders from the Lord of Light. She also tells Jon that maybe he was brought back to die this time around (this is not what you say right before a battle, Melisandre!) Speaking of Melisandre, Davos stumbles upon the site where Shireen was burned alive. He sees the carving he gave to his young friend and it is clear he will seek vengeance for her death.  Suddenly, the horns sound and it is time for battle. 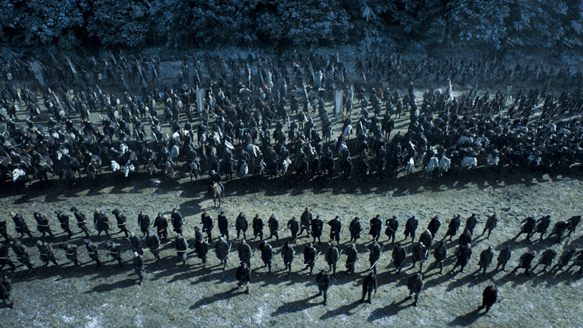 Jon and his men approach the battlefield, and many look on in shock as they witness the flayed bodies of men hung on burning crosses. Ramsay means business and rides forward holding Rickon Stark on a rope. He cuts Rickon’s ropes and asks, “You like games, little man? Let’s play a game.” Ramsay orders Rickon to run as fast as he can across the battlefield to his brother. The next sequence is intense as Rickon runs and Ramsay begins to shoot arrows but “misses.” If this moment made you scream at your television, it is understandable. Jon falls right into Ramsay’s trap and goes after Rickon. As Jon and Rickon almost reach each other, Ramsay’s arrow hits Rickon and another Stark falls.

Jon then charges forward as the Bolton army shoot arrows at him. In a heart-pounding moment that makes one question Jon’s survival, he stands with his sword, Longclaw, ready to take on thousands of men on his own when his army comes rushing past him. Ramsay orders his archers to fire their arrows, while Davos holds back so they do not just kill their own men. The following moments are a sequence of high voltage mastery as we see Jon submerged in a full-on bloodbath, slaughtering men left and right. The scene is full of chaos as Jon tries to take down everyone in his path. Davos and the rest of Jon’s reinforcements then charge forward, but Ramsay’s army ends up surrounding Jon and all of his men. They inch forward with their shields locked together and their spears forward enabling them to strategically kill members of Jon’s army. Jon’s men try to push back, but more men die. Running out of options, Tormund leads the men over a giant pile of dead bodies. And then we see Jon being trampled while suffocating under the pile of dead bodies. It is another moment where it looks like Jon’s not going to make it, but then he claws his way to the top and lets out a gasp, similar to the one he released when he came back from the dead.

Jon looks defeated as he witnesses the massacre that is happening, but then a horn sounds and Littlefinger comes riding in with the Knights of the Vale, Sansa by his side. The Vale army immediately takes down the Bolton forces and Ramsay runs off back to Winterfell. Jon, Tormund and Wun-Wun run off after Ramsay and when they reach Winterfell, Wun-Wun busts the gate down. Wun-Wun, having multiple arrows in him from the battle, is finally taken down by a final shot by Ramsay. Ramsay tries killing Jon with arrows as well, but Jon shields himself and reaches Ramsay. He then begins to beat Ramsay to a pulp, which is immensely satisfying to watch. Jon stops when he sees Sansa, though, knowing this is not his kill.

Seeing the Stark banner back where it belongs probably gave all the feels, but nothing surpasses the final moments of the episode where Sansa gets her revenge. Ramsay is tied to a chair and still thinks he will somehow survive this moment.  “You can’t kill me,” he says, “I’m part of you now. “All memory of you will disappear,” Sansa assures. She then takes a play out of Ramsay’s book and sticks his own hounds on him. Ramsay does not believe they will harm him, but she reminds him he has not fed them in days. Beloved fans are then given a taste of what is to come as one of the hounds starts eating his face. Sansa walks away with a smile and things seem just a bit brighter in the North. With all this action unfolding, CrypticRock gives Battle of the Bastards 5 out of 5 stars. 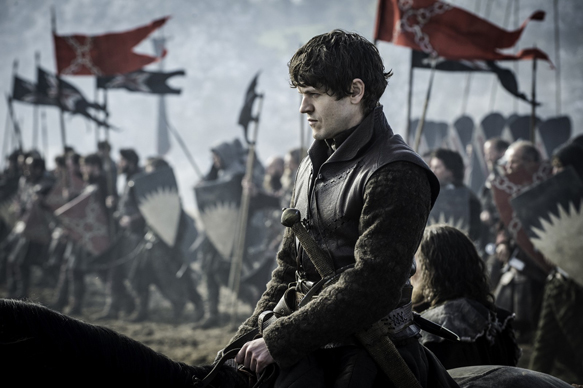