The first five episodes of the sixth season of HBO’s Game of Thrones gave us copious amounts of information along with plenty of action. Now reaching its halfway mark, the show took a decidedly slower approach and allowed for its audience to take a breath before it ventures into its second half, a definitive “calm before the storm.” And, after last week’s heart-pounding ending, the show gave fans the gift of zero deaths in “Blood of My Blood,” even offering one surprising and another long-awaited return. 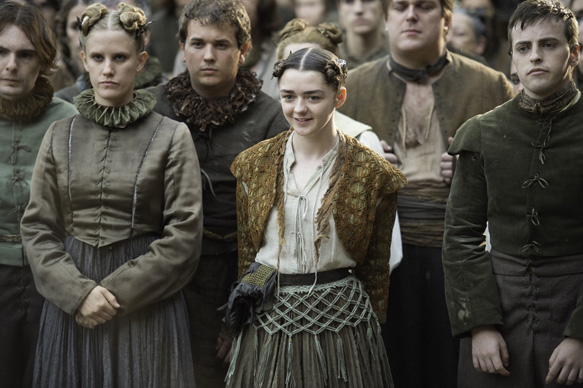 Though the episode did have a slower pace, Bran’s storyline seems to be gaining momentum as he and Meera are on the run, while Bran remains in a warged state, being shown flashes of images from the past. He is, after all, now the Three-Eyed Raven. This would have been the perfect moment to watch the scene in slow-motion because we, along with Bran, are given visions that include Jaime’s “kingslayer” moment with Aerys Targaryen as well as Aerys ordering to “burn them all.” Bran wakes up after the sled he has being dragged on gets stuck and warns Meera that the wights are coming. But, before the wights have a chance to attack Bran and Meera, a cloaked man rides up in time to save them. It is not difficult to figure out who the man is because he looks a lot like Benjen Stark, who has been missing since season one, but the show does not reveal the man in black’s identity just yet.

Instead, viewers are taken to Horn Hill, where Sam, Gilly, and little Sam arrive to greet Sam’s mother and sister. Before they get there, Sam warns Gilly not to mention she is a Wildling because his father despises Wildlings. It is fun to watch Gilly flabbergasted by her new environment, especially when Sam’s sister asks about her favorite color so she can find her a dress for dinner. The warm welcome is short-lived, however, because that night fans meet Randyll Tarly, who shows nothing but disdain.He  criticizes Sam with hostility, from his weight, to his skills as a hunter, to his coming home to become a maester.

While Sam sits quietly and takes the jabs from his father, Gilly decides to stand up for him, revealing that Sam has killed a White Walker, but also that she is a Wildling. This revelation leads to douche-bag dad telling Sam that Gilly can stay on but she will be working in the kitchens. Also, Sam is only allowed one more night there, but that is fine because he finally grows a pair and leaves, taking Gilly, her son, and Heartsbane, the family sword. The sword is made of Valyrian steel, which could come in handy against White Walkers if their journey leads them back to the North. 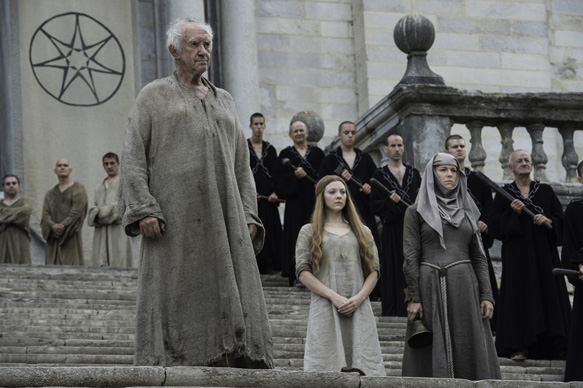 In King’s Landing, King Tommen discusses Margaery’s atonement with the High Sparrow and reveals his concern for the queen, but the High Sparrow assures him her walk of shame will not be the same as Cersei’s because she has the love of the people. The High Sparrow even has a surprise for Tommen to calm his worry, he allows the young king to see his queen. But, Margaery uses the opportunity to manipulate Tommen and speaks of how she was “good at seeming good” and how “it’s such a relief to let go of those lies.” It is obvious Margaery is playing the game here and her focus is to do what she must in order to save the one person she truly loves, her brother.

In Braavos, Arya is still on her kill mission. She is back to watch the play because she is there to poison Lady Crane. But, it is clear Arya feels a degree of pity for the actress, something she should not feel if she is truly No One. Still, she manages to slip the poison into Lady Crane’s rum bottle and even bumps into Lady Crane on her way out. They have an exchange, which ultimately contributes to Arya changing her mind and stopping Lady Crane from drinking the rum, warning that someone wants her dead. In saving Lady Crane, Arya signs her death warrant because the Waif is there to witness her mistake and is given permission by the Faceless Man to take Arya down. It will be interesting to see how this plays out now that Arya has retrieved her trusted sword, Needle, and seems to be more certain of who she is and what she needs to do.

Back at King’s Landing Jaime and Mace Tyrell are marching with Tyrell’s army to take down the High Sparrow as Margaery’s walk of shame is about to commence. Lady Olenna is also there to make sure her grandchildren are extracted safely, but the High Sparrow is not affected in the least because there will be no walk of atonement. Instead, the High Sparrow reveals Margaery has atoned by converting Tommen, who walks out with his Kingsguard in tow. The High Sparrow announces a new alliance between the crown and the faith, foiling Jaime and Cersei’s plan.

Jaime gets more bad news in the Throne room as Tommen strips Jaime of his title as the head of the Kingsguard. He sends Jaime to Riverrun to help the Freys reclaim the territory from the Blackfish. Brienne is also on her way there to enlist the Blackfish’s support for Sansa and Jon’s cause, which should create an interesting confrontation now that the two are once again on opposing sides. Jaime is furious about the High Sparrow’s control over his and Cersei’s son and wants to kill the man, but Cersei talks him out of it. She convinces Jaime that he needs to go and secure Lannister armies, assuring she has the Mountain to protect her. 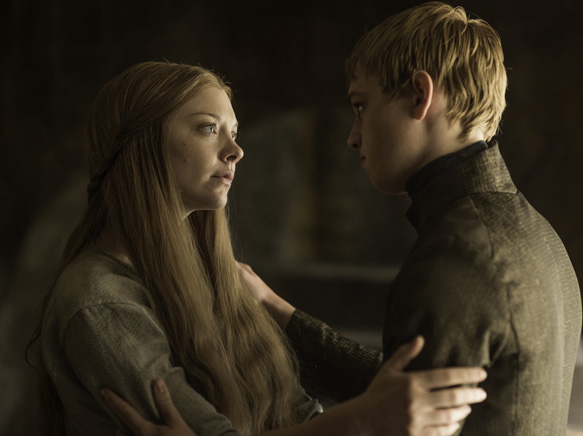 In the riverlands, we see the return of Walder Frey, who is not happy with his sons now that they have lost Riverrun to the Blackfish. He wants it back and has a secret weapon he has been holding prisoner, Edmure Tully (welcome back Tobias Menzies!). While it is nice to know Edmure is still alive, he is only being kept that way to be a pawn and used as leverage.

North of the Wall, Bran and Meera learn the identity of their savior and, as expected, it is Bran’s uncle, Benjen Stark. He divulges the details of what happened to him, telling Bran and Meera he was stabbed by a White Walker and on the verge of death was saved with dragonglass by the Children of the Forest. Benjen also confirms that Bran is now the Three-Eyed Raven and declares that Bran will be ready when the Night’s King attacks. Off to Castle Black they go.

Remember that image of Aerys in Bran’s flashback? Yeah, that seems pretty intentional because somewhere in Essos, Daenerys proves that the apple does not fall far from the tree. After talking to Daario about how many ships they will need to sail to Westeros, which happens to be a thousand (good thing that is how many the Iron born are building), Dany is distracted and rides off. When she returns, she is riding on Drogon and gives a powerful speech to rally the Dothraki. Yet, as she speaks of conquering Westeros, she seems more tyrannical in her approach, and it makes us wonder if she is beginning to resemble the Mad King or if this is just another strategic maneuver to cement Dothraki support. CrypticRock gives Blood of My Blood 3.5 out of 5 stars. 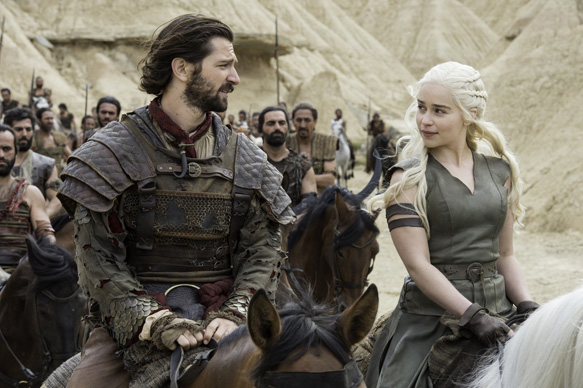