Hodor! Whatcha talkin’ bout Wylis? Well, Game of Thrones fans, take a huge sigh of relief because we did not have to wait quite as long as expected to see Jon Snow come back from the dead. But, that was not the only reveal during the season’s second episode, Home. While Jon came back to life, others were killed, quite brutally, throughout the episode, continuing with the slow shift of power. We also saw a focus on family, which included Bran’s (welcome back) flashback to a young Ned, Benjen, and Lyanna Stark, and a verbally cognizant Hodor. Say what? Yes, there was an inkling of backstory that is safe to assume will be revisited, hopefully with the reveal of Jon’s true parentage and also what caused Hodor to become a one word machine. 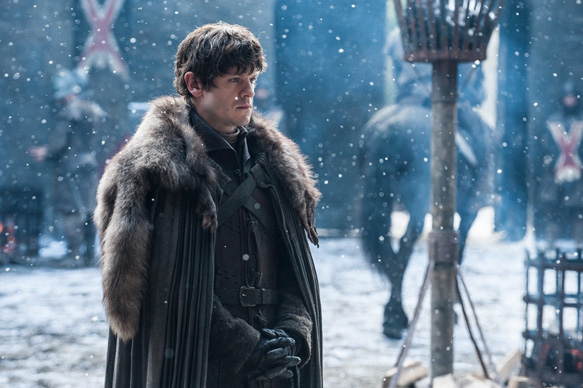 Bran grew up. After a year’s absence, the young warging Stark has returned and our first image of him is with the Three-Eyed Raven, both in a trance. In their minds, they have traveled back in time to witness Bran’s father Ned and uncle Benjen training in Winterfell. Soon Lyanna Stark comes riding in and joins in on the fun, but decides to include a young Hodor, whose real name, we learn, is Wylis. Bran recognizes Wylis, whom he has only ever known as Hodor, and sees that he was not always just a duo syllabic beast of a man. Bran does not stay in his trance for long and once he is awake, tries to talk to  Wylis/Hodor, but is greeted with the only response he has ever heard, Hodor. We also see Meera outside, seemingly contemplative when she is ominously told by a Child of the Forest that Bran needs her and that “he isn’t going to stay here forever.”

Back at the Wall, Thorne and the other members of the Night’s Watch are trying to convince Ser Davos to surrender, but after they do not hear a reply, they are ready to break down the door. We almost get to see Davos in battle, though he is not much of a fighter, but it never comes to that because he and the remainder of Jon’s supporters are saved by the Wildlings. Led by the giant, Wun Weg Wun Dar Wun (say that five times fast), the Wildlings come charging in and we get our first skull crushing of the episode. The Night’s Watch quickly surrender and the leader of the Wildlings, Tormund Giantsbane, goes to inspect Jon Snow’s dead body before it is prepared for a funeral pyre.

That is not the only funeral happening as we see Cersei back at King’s Landing about to attend her daughter, Myrcella’s funeral. We also get another skull bashing thanks to the Mountain.  But, Cersei is not allowed to leave the Red Keep, by command of the king, and is denied a final moment with her deceased daughter. Let us face it, King Tommen is a wimp. He confides in Jaime as they stand over Myrcella’s body his regrets at not being the ruler he should have been and preventing events like Cersei’s walk of shame and other acts of the High Sparrow and his followers.

Jaime urges Tommen to go see his mother when the High Sparrow shows up and we see the power struggle between the two. After a bit of verbal sparring, things get more tense when the High Sparrow’s followers arrive, and though he could kill the High Sparrow and probably the majority, if not all of his followers, he backs down. It is a strange thing to feel any type of sympathy for Cersei, but that is exactly what the show has conjured over the first couple episodes. It is evident nothing is stronger than Cersei’s love for her children and so even though she has been betrayed by Tommen by his failure to protect her, she forgives him. 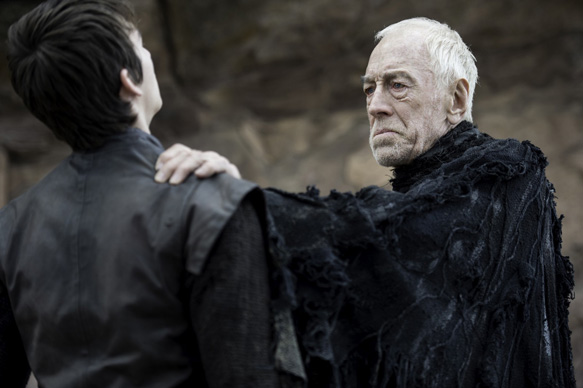 Finally, some dragons! In Meereen, Tyrion continues to use his wits to get out of his current situation. He is going to free the dragons because that is their biggest asset and they are smart creatures who can tell a friend from a foe. It is a brave task that he takes upon himself and though for a moment it looks like he might get his head ripped off, he is able to release the dragons from their chains and leave unharmed.

Back on the streets of Braavos, Arya is still a beggar trying to become No One. She soon gets another lesson/test by the Waif, who after a round of stick fighting quickly disappears. But, her test is not over because Jaqen H’ghar is there to offer her shelter, food, and her eyesight back if she speaks her name. She responds by telling him she is No One and it is the right answer because he leads her away and her days as a homeless beggar are over.

Ramsay Bolton really is the worst. After learning of the birth of his half-brother, Ramsay acts pretty quickly, killing his father and then in a cringe-worthy moment, feeding his step mom and her newborn child to his dogs. Now that he is in charge, it is off to Castle Black and here is hoping he gets torn to shreds by Ghost (karma). After that horrific scene, we get a glimpse of Sansa and Theon camping out with Brienne and Pod. The bond between Theon and Sansa seems to have been repaired. She wants him to accompany her to The Wall, but Theon decides his journey will take him somewhere else, “home.”

Unfortunately, Theon’s home will not be exactly the same when he gets there because soon after Yara Greyjoy argues with her father, Balon, he is met by his younger brother, Euron, on a wavering bridge. Euron is not there for a family reunion, but to take over his brother’s throne so he throws his brother off the bridge. The next morning, Balon is buried at sea, and though it seems like Yara would be the obvious choice for a new ruler, there must be a “kingsmoot,” a ceremony where longtime ship captains choose the next king.

And then there was Jon. We return to The Wall where Davos seeks the counsel of Melisandre to see if her magic can bring Jon back. But, Melisandre is not feeling confident and does not feel she has the power to resurrect him. Thankfully, Davos does not give up and Melisandre agrees to give it a whirl. The ceremony begins, with Melisandre cleaning the blood from Jon’s body, which lies naked on the table with a strategically placed cloth. His hair and beard are then clipped and tossed into the flames. Melisandre begins her incantations while touching Jon’s body, which she repeats until she gives up after a final plea. Everyone in the room, except Ghost, leaves, thinking the spell failed. A few moments later, Ghost senses something because he gets up and Jon awakens, gasping. This final moment of the episode is reminiscent of Bran waking from his coma in season one. Could Jon also be a warg? Probably. Stay tuned, and until then, CrypticRock gives Home 4.5 out of 5 stars. 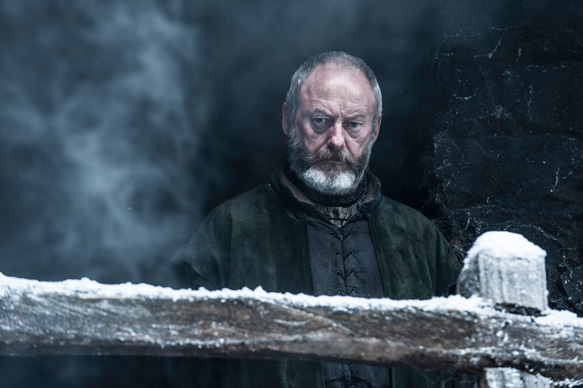