Is there a man more broken than the Hound? The seventh episode of Game of Thrones, The Broken Man, offers a few examples of those who have seemingly fallen, Edmure Tully appearing to have it the worst right about now, but the return of the not-so-villainous Clegane brother was the gift fans all were hoping for. The last time we saw The Hound, he was on the verge of death, but he is looking nice and strong these days as he gathers logs to help construct a sept for his new buddy Brother Ray, played by the wonderful Ian McShane. Ray is a Septon of the Faith of the Seven, who is searching for peace and redemption after a life of violence, and who sees The Hound as someone to be saved. After revealing it was a woman that ultimately brought him down, The Hound confesses that hate is what kept him going. Ray, a perfect foil for Sandor Clegane, tries to convince The Hound that he has already been punished for his sins, but it is obvious The Hound is still trying to reconcile his past. 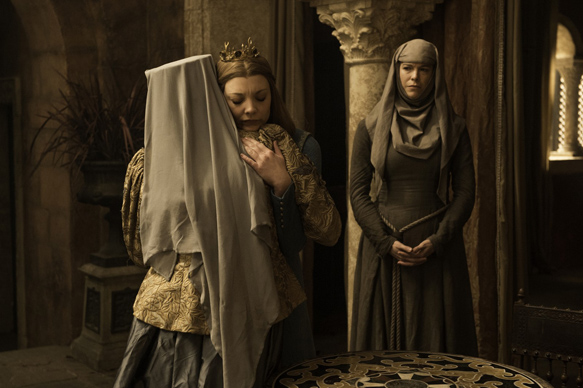 From a man who is trying to repent to a woman who only pretends, we then see Margaery reading from holy text as she is approached by the High Sparrow. Margaery shows off her ability to memorize scripture in an attempt to impress the pious man, but he is really there to talk about sex. Margaery has left King Tommen cold in his bed and the High Sparrow is there to remind her that her duty is to her king and she must produce an heir. The High Sparrow also expresses his concern for Margaery’s grandmother, telling the queen he fears for her grandmother’s safety, a loaded statement if ever there was one.

If it was not clear before that Margaery is playing a very skilled game of chess, it becomes very evident when she meets with the Queen of Thorns and urges her to leave King’s Landing. Lady Olenna does not understand what is going on with her granddaughter and refuses to leave her until Margaery places something in her hand, a drawing of a rose, the Tyrell sigil. Before Lady Olenna leaves, Cersei visits to try to convince her to stay and remain united against the High Sparrow.  Olenna takes this moment to annihilate Cersei, pointing out it was her actions that created the current situation. “You’ve lost,” she finally says once she has pointed out how truly alone Cersei is.

With Bronn by his side, Jaime makes his way to Riverrun and witnesses the Freys using Edmure and threatening his life to convince the Blackfish to give up the castle. The Blackfish calls their bluff and tells them to go ahead and do it, he will not give up his home. Jamie soon takes over; noting how easily he and his men approached and knocks some sense quite literally into the Frey men. The siege is under Jaime’s command now and he is trying to use sense over swords to reclaim the land. He asks for a parley and the Blackfish agrees to talk, but does not back down. He dares Jaime to try to breach the walls or starve them out, revealing they have enough provisions for two years. The Blackfish does not wish to make peace but uses the moment to insult Jaime and put him in his place. 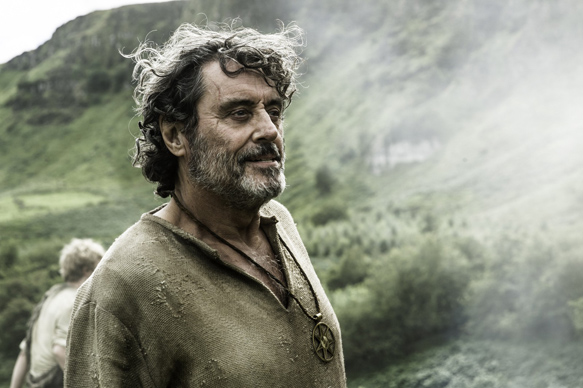 In the North, Jon tries to rally the Wildlings, pointing out that they are dead anyway if they do not find a way to unite the houses of the North. The Wildlings are skeptical and still have a hard time agreeing to fight for Jon, but Tormund convinces them, saying Jon died for them and they should be willing to do the same in return. The giant Wun-Wun finally utters the final word, “Snow,” which means the Wildlings are on board.

Now Jon and Sansa can focus on recruiting from various houses of the North. The first place they visit is Bear Island where they must negotiate with the very young Lyanna Mormont. She is tough as nails and is not easy to convince, even though Jon points out that he served under her uncle. Ultimately it is Davos that is able to reason with the child by relating to their shared experience of being placed in positions of authority. He appeals to her desire to keep her people safe, pointing out that this is not a war between the Starks and the Boltons, it is a war between the dead and the living, and the dead are coming. In order to keep everyone safe, the North must unite and Ramsay Bolton stands in the way. Lady Mormont finally agrees but is only able to provide 62 men. After all that, it does not seem quite like a victory for the Sansa/Jon/Davos team, but they will take it.

Next, they approach the Glovers, but they want nothing to do with the Starks, especially once Lord Glover finds out the Wildlings make up most of Jon’s army. Sansa reminds Lord Glover of his duty to the Starks, but he points out how faithful House Glover was to the Starks during the War of the Five Kings and what that got them. “House Stark is dead,” he says and it is a blow to Sansa and Jon’s mission. Sansa is in a tricky position. She tries to convince Jon that he needs more men before taking on Ramsay, but Jon does not want to take any chances with the elements of winter affecting the small army they have assembled. Sansa then does the one thing she never wanted to have to do and writes a letter, most likely to Littlefinger, to enlist help. 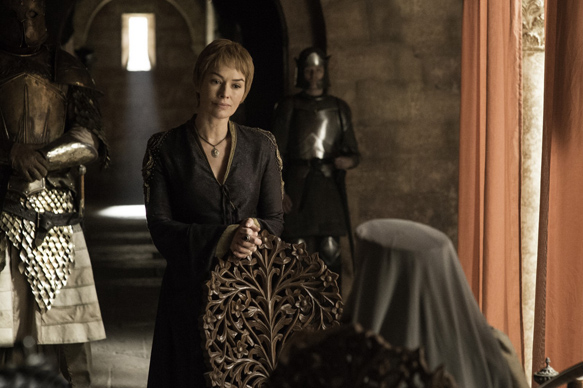 In Volantis, Yara and Theon take a break from traveling and plotting their next move to enjoy the company of women and ale, at least Yara does. Theon, still traumatized by his time with Ramsay, is not too enthusiastic to have half naked women surrounding him. He cannot even find the stomach to drink some ale, which Yara finds unacceptable. She may be the only person who truly loves Theon and forces him to drink, to start to become the Theon Greyjoy he once was and tells him to either pull it together or put an end to his life. Before Yara leaves Theon to enjoy some time with a prostitute, she tells him that they will sail to Meereen and strike a deal with Daenerys to provide ships in return for protection. Good plan.

Back to the Hound, who is now joined by others, gathered to listen to Brother Ray confess the details of his past. He talks of how he killed a boy and how that moment haunts him, but ultimately spreading the message that no matter the sin committed, there is always a way to repent, to do good and help others. It is clear this is the message The Hound is searching for, unsure if he can move on from his past. Just as The Hound starts to feel hopeful, three rogue men from the Brotherhood Without Banners show up and we know trouble lies ahead. The Hound knows the men are a threat and warns Ray that he should be prepared to fight, but the reformed man does not want to spill blood. His attempt at peace ultimately fails when The Hound returns from chopping wood to find everyone, including Brother Ray, dead. The Hound is sure now that he cannot escape the man he was and will have his vengeance, ax in tow.

Next, viewers reach Arya in Braavos and she is eager to book her passage back to Westeros. Once she does just that, she seems to be optimistic as she stares into the horizon. Could Arya sail off into the sunset with Needle and return home? Could she be reunited with Sansa and Jon? For now the answer seems to be a resounding no. She lets her guard down, which is suspicious since Arya is far too smart for that, and is approached by an old woman, who quickly slashes Arya across the stomach and reveals herself as the Waif. She continues to stab Arya, finally twisting her knife in Arya’s gut before Arya is able to get away by jumping into the water. Arya emerges from the water, blood spilling, and wanders the streets of Braavos seeking help. But, Arya’s fate will have to be left to our imaginations for now. CrypticRock gives The Broken Man 4 out of 5 stars. 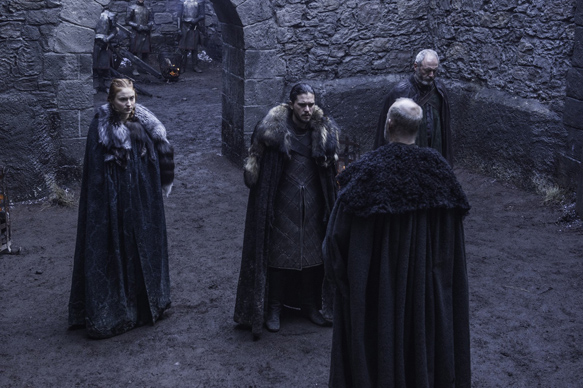