Hold the door! Hold the phone! Hold everything! Why do you give something to us and then just take it away? If you need a hug after watching the fifth episode of Game Of Thrones’ sixth season, The Door, you are not alone. Long awaited answers were given regarding the creation of White Walkers, but the real gut-puncher came in the show’s final moments when fans seemingly lost one of our most beloved and innocent characters. Sure, it is possible Hodor did not die and viewers hold on to the hope that the gentle giant somehow survived, but what we know is that whether Hodor is dead or alive, he is truly alone. 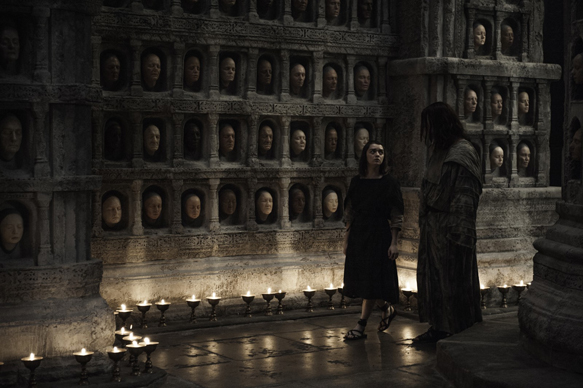 Before we learn that Bran pretty much ruins everything, we find Sansa, at the start of the episode, facing the man that gave her to the monster that is Ramsay Bolton. Sansa, with Brienne by her side, completely annihilates Littlefinger as she asks if he knew about Ramsay, forcing him to guess all the despicable things that were done to her. Littlefinger does not dare protest, looking ashamed, and after guessing a few things correctly, admits he did not know the extent of Ramsay’s cruelty. Sophie Turner is excellent here as she implies just how deep her wounds go while showing she is a survivor. The impact is felt, not just by Littlefinger, but by the audience as well.

Littlefinger does offer some helpful information, telling Sansa that her uncle, Brynden “The Blackfish” Tully, has taken Riverrun back from the Freys and could supply Sansa with an army. Though Sansa does not want assistance from Littlefinger, she may end up needing it.  Before Littlefinger walks away, he reminds Sansa that Jon is only her half-brother, planting a seed of doubt in fully trusting Jon.

In Braavos, Arya is still perfecting her stick-fighting skills as she trains with the Waif, who does not think she will ever be able to fully break away from her Stark legacy. Jaqen agrees that the Waif has a point and gives Arya a mission after providing some history about the Faceless men. Her task seems simple. She must kill an actress named Lady Crane, and so she goes to witness the actress in a play depicting the end of Robert Baratheon’s reign in Westeros. She soon sees her father shown as a fool and it is a difficult thing for both Arya and the viewer to watch. Arya finds her target backstage where bared breasts and male genitalia roam freely, but notices that Lady Crane and only Lady Crane drinks rum, which is where the poison will go. 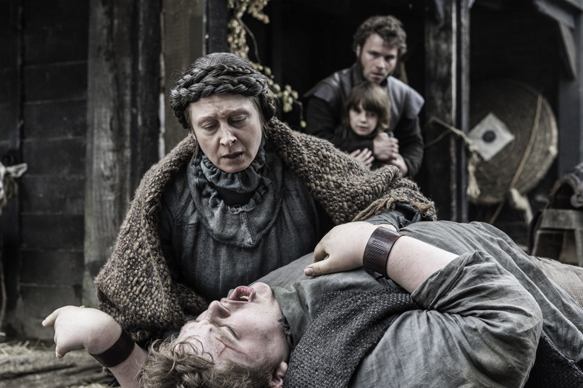 Back in Westeros, Bran is getting a glimpse into the past as he witnesses the Children of the Forest gather together to stick a blade of dragonglass into a man’s chest. The man’s eyes turn blue, and our minds are blown, as Bran awakens. We now know the Children of the Forest created the White Walkers to fight against the men who were threatening their lands.  Obviously, that did not turn out quite as expected.

Before fans are given a moment to fully process this revelation, the show cuts to a Kingsmoot taking place in the IronIslands. Yara makes her claim to the throne and tries to convince the men that she is the best candidate even though a male heir still lives. Theon speaks up, with a newly cut hairdo, and supports his sister as he said he would. Yet, as good as his speech is, good ole uncle Euron shows up and steals the show. Euron admits to killing his brother, and apologizes for not doing it sooner, criticizing his brother’s rule that led his people into two failed wars. He promises to build the largest fleet of ships and sail to Slaver’s Bay where he will seduce the mother of dragons with his ships and together they will conquer the seven kingdoms.

It turns out becoming king is pretty brutal in the Iron Islands as we see Euron being anointed by being drowned, and then rising as the new king. While all this is taking place, Yara and Theon are getting the hell out of dodge, and take all of the best ships with them. They are most likely sailing to find Dany themselves, and it is a good thing because Euron wants them dead. When he sees that they have fled with his fleet, Euron orders a thousand ships to be built.

Speaking of Dany, after her epic moment at the end of last week’s episode, she receives some devastating news when she tries to thank Jorah with an embrace for always coming to her aid after she repeatedly banished him. But, he pulls back and reveals his greyscale arm, and the realization that Dany might lose this man that has just admitted to loving her delivers a truly touching moment. Dany commands Jorah to “find the cure, wherever it is in this world” as tears form in her eyes. It’s a good thing Dany is on her way back to Meereen because even though Tyrion’s plan seems to be working, not having the queen there to validate his plan could lead to chaos.

In the meantime, Tyrion needs to convince the slaves to go along with his proposed compromise and summons a Red Priestess named Kinvara to help spin his propaganda. Luckily, Kinvara, just as creepy as Melisandre, agrees to help since she believes Dany is the “one who was promised.” Varys is not too happy about involving a “fanatic,” and confronts the priestess about Melisandre’s claim that Stannis was the so-called chosen one. She does not flinch though, explaining that “terrible things happen for a reason,” and begins to speak of the events of Varys’ castration. It is a moment that leaves Varys distraught, and it is quite unnerving for the audience to see him this way. 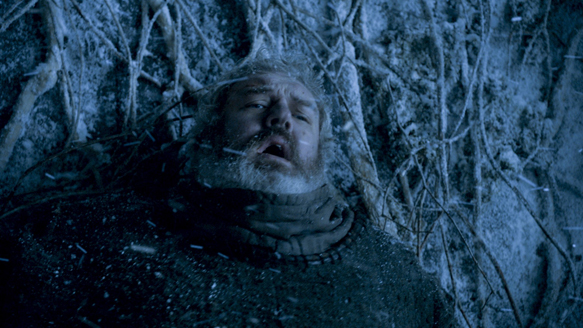 Next, viewers return to Bran, who decides to journey to the past without the Three-Eyed Raven and finds himself among thousands upon thousands of wights. He walks through them and finds the Night’s King, who then locks eyes with Bran. When he turns around, he sees that the undead are looking at him as well. Suddenly, the Night’s king grabs Bran’s arm, marking him, which means the Night’s King can now find him and is on his way.

Before we reach the climax of the episode, fans are brought backs to Castle Black, where Jon and Davos are having a strategy meeting, discussing how they can rally various houses of the North to come to their aid. Sansa uses this moment to divulge the information that her uncle has retaken Riverrun and could be an asset, but chooses to leave out the fact that it was Littlefinger who told her. Knowing that Ramsay could intercept a letter, Brienne is charged with the task of delivering the message to the Blackfish. As Jon and others get ready to leave to begin recruiting Northerners for their cause, we learn that Sansa is a pretty speedy seamstress as she gives Jon a cloak reminiscent of the one that both Ned and Robb wore. It is a sweet moment between the two, along with a brief moment of comic relief as Tormund gives Brienne another come-hither look that leaves her disgusted.

The warm and fuzzy times are fleeting because the Night’s King and his army have found Bran. The Children of the Forest try to stand their ground and throw explosives as Meera tries to wake Bran so he can warg into Hodor, and they can flee. But, he is in the past at Winterfell with the Three-Eyed Raven and will not wake up. The wights make their way into the cave and Bran’s direwolf, Summer, tries to stop them, but there are too many to fight.  It is another deeply sad moment as yet another direwolf is lost.

We also see the death of the Three-Eyed Raven, who is killed by the Night’s King and turns into a cloud of black smoke in Bran’s vision. Bran finally wargs into Hodor, who pulls him down a tunnel with Meera. Leaf tries to help them escape by throwing one last grenade before she ultimately falls to her death. By doing this, Leaf is able to buy Bran, Hodor, and Meera enough time to get out of the cave’s backdoor, which Hodor shuts so the wights cannot get out.

But, something goes terribly wrong.  As Bran wargs into Hodor in the present, a young Wylis notices him in his vision of the past, as Meera screams for Hodor to “hold the door.” While Bran hears Meera repeating “hold the door,” Wylis begins to have a seizure and yells, “hold the door,” the words eventually becoming the word, “Hodor.” It’s a tragic realization as we learn that Bran’s power caused the brain-frying event that created Hodor. As Bran and Meera get away, Hodor is repeatedly bitten by wights but never stops holding the door. CrypticRock gives The Door 4.5 out of 5 stars. 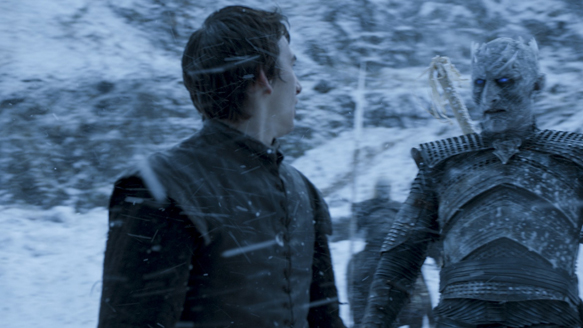