Mind. Blown. That is probably the best way to sum up the explosive finale of what is arguably Game of Thrones’ best season. The Winds of Winter provided so many gratifying resolutions, setting in motion events that will bring the story to a close in the final two seasons. After last week’s episode wowed us with one of the most impressively shot battle sequences on television, the final episode raised the bar with its dramatic storytelling. It was a game-changer of epic proportions with the quietest moments speaking volumes. 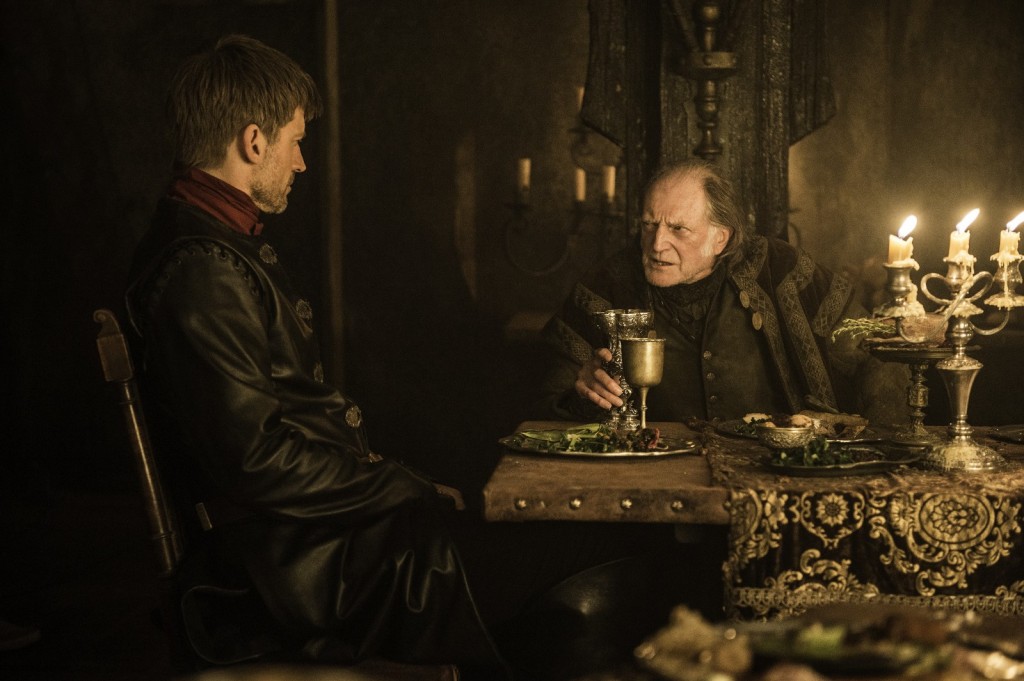 The Winds of Winter opens with a 25-minute sequence in King’s Landing as we hear the sound of bells ringing while everyone awaits Loras’ and Cersei’s trial. Cersei, who dresses herself in a black gown with metal embellishments, appearing as if she is wearing armor, looks at the city, her poker face remaining in tact. Meanwhile, Loras is shown shaking in his cell before he is taken to the Sept of Baelor. Margaery and her father are there waiting to see the fate of her brother, while Grand Maester Pycelle is accosted by a child who whispers something into his ear.

King Tommen is ready to go, but the Mountain shows up and prevents him from leaving, making sure he is safely guarded. At the Sept, Loras confesses to every accusation made against him and accepts the punishment for his crimes. He chooses to devote himself to the Seven Gods, which means he must abandon his name, title, and claims to ruling Highgarden. He then must endure having the star of the Seven carved into his head. There is no trial for Loras, but Cersei still has not shown up for hers, so Lancel goes to retrieve her. On his way, Lancel notices a child running into the tunnels below the Sept and follows.

As Lancel is lured by one child, Pycelle follows another into Qyburn’s lair. Pycelle has been around a long time, dating back to the Mad King, but choosing Tommen over Cersei causes his doom when a group of knife-yielding children come forward and attack him at once. Below the Sept, Lancel makes his way to an area filled with barrels, and in a moment of distraction at the sight, he is stabbed by the child he was chasing. In the Sept, Margaery is getting anxious knowing that Cersei’s absence must mean something is about to go down and tries to warn the High Sparrow, but he ignores her concerns. Lancel, meanwhile, is on the ground and sees the candles, whose flames are about to ignite the wildfire spilling out of the barrels. He tries to pull himself toward the candles, but does not make it in time. As Margaery tries to get everyone to leave the Sept, it explodes as a cloud of green smoke encompasses the site of mass destruction. Check mate.

Cersei gets revenge on everyone who has wronged her, including Sept Unella when she decides to perform some “wineboarding” on the holy woman, confessing all the crimes she was accused of and explaining that she did everything because she enjoyed it. Then the Mountain enters the room, removes his helmet as Cersei walks out repeating the word, “Shame.” Unfortunately, keeping Tommen out of the Sept proved futile. His devastation over the death of Margaery resulted in him leaping to his death. After watching the aftermath of his mother’s vengeance, Tommen removes his crown and jumps out of the window, and the last shred of humanity left in Cersei dies along with him.

This scene further proves the premonition Cersei was previously given by Maggy the Frog, who claimed all her children would die. Cersei takes a last look at Tommen’s body and she seems hardened and unaffected, deciding to burn his body. At this point, her motto seems to be to burn them all, especially that she is now the Mad Queen sitting on the Iron Throne. We will have to wait to see if Jaime will be forced to kill Cersei the way he killed the Mad King to prevent more destruction. 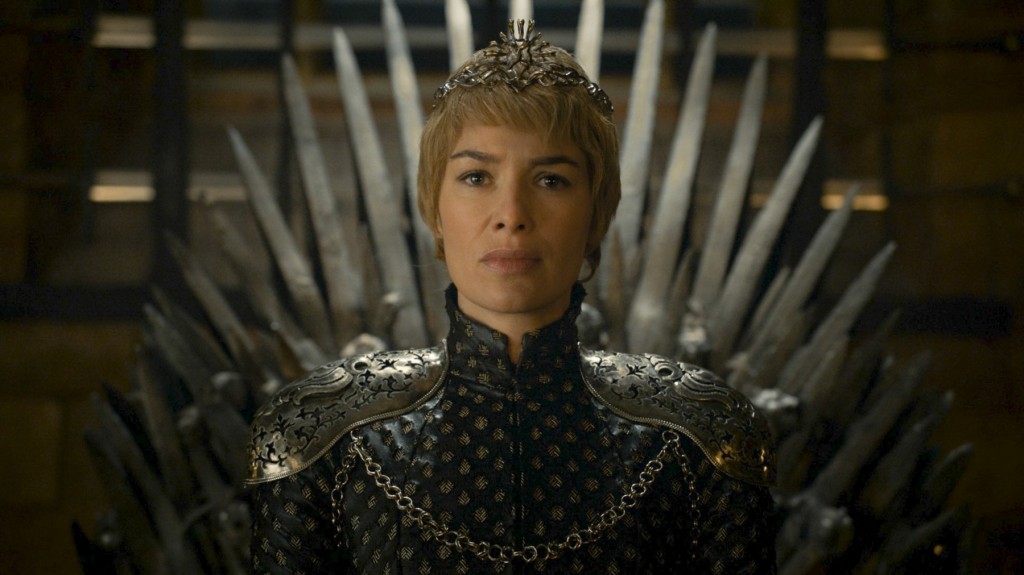 At the Twins, Walder Frey is celebrating the takeover of Riverrun, gloating about “his” victory. Jaime quickly points out that the Freys would not have been able to succeed without the Lannisters, and asks if they even need the Freys. Later, when Walder Frey is dining alone, a serving girl that was eyeing Jaime earlier comes back to serve him food and wine. Walder wonders where his sons are and the girl keeps telling him they are right here. When Walder realizes his sons have been cooked into meat pies (Sweeney Todd vibes), the girl rips off her face to reveal herself as Arya Stark. “I wanted you to know that the last thing you’ll ever see is a Stark face smiling down at you as you die,” she says just before she slices Walder Frey’s throat, killing him the same way her mother was murdered.

We then finally see where Sam and Gilly end up as they reach Oldtown and witness a white raven, signaling that winter is now here. Once they enter the Citadel, Sam is greeted suspiciously by the man at the front desk who has not been informed that Lord Commander Mormont and Maester Aemon have died, or that Jon Snow has been appointed the new Lord Commander.  While Sam must wait for the arch maester, he is taken to a massive library, which seems like he has just stepped into Hogwarts. There is a lot of history in that room, which Sam is sure to use to aid in the battle against the Night King.

At Winterfell, Melisandre and Jon are approached by an outraged Davos, who wants Melisandre punished for what happened to Shireen. After Davos demands Melisandre tell Jon about her role in Shireen’s death, he asks Jon to have her executed. Melisandre tries to convince Jon that he will need her help against the Night King. In the end, Jon chooses not to kill Melisandre and instead exiles her, telling her to travel south and not to return. If she does, she will be hanged.

Later, Jon and Sansa have a heart to heart. He confesses that Sansa is the reason they won the battle against Ramsay, but questions whether or not they can trust Littlefinger. Sansa also apologizes for not telling Jon about the Knights of the Vale, but Jon does not want anything to come between them. He tells her, “We have so many enemies now, we can’t fight a war amongst ourselves.” It is a beautiful moment seeing them connect after being separated for so long with Sansa telling Jon, “Winter is here,” and Jon jokingly responding, “Father always promised, didn’t he?” 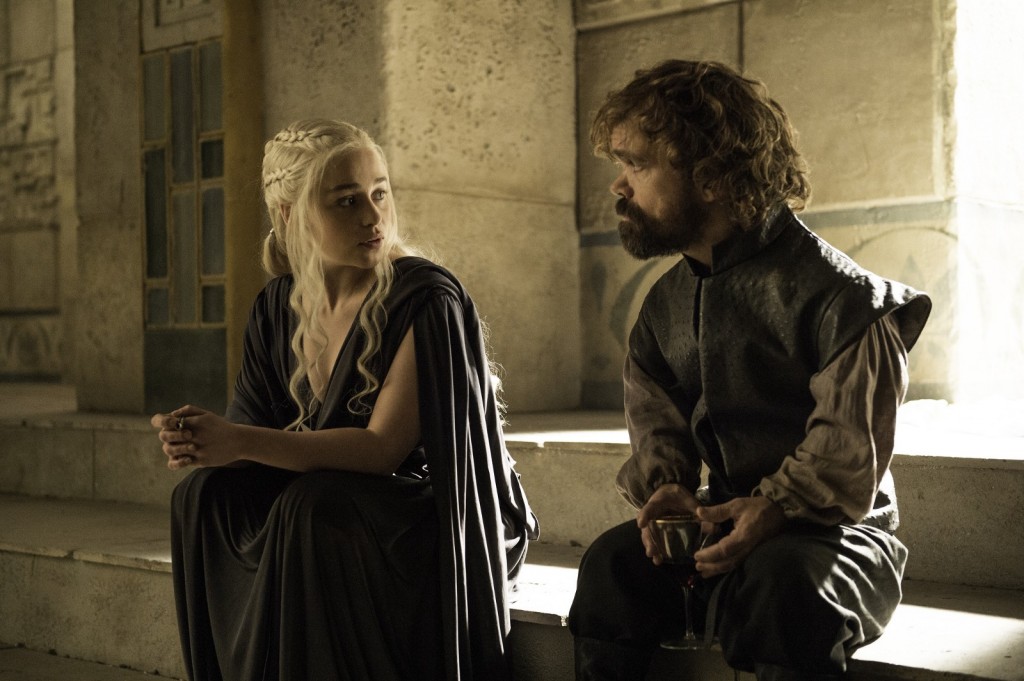 Lady Olenna, mourning the loss of her family, has made her way to Dorne. Despite her devastation over her whole family being wiped out by Cersei, she does not lose the sharpness of her tongue, shutting down the Sand Snakes. She is out for vengeance and now she will have Dorne’s help, along with another Lannister enemy Daenerys, once we see Varys appear from behind a curtain to utter the words, “Fire and Blood,” the motto of house Targaryen.

Before Dany and her crew of outcasts finally sail off the Westeros, she has some business to take care of. She informs Daario he will not be coming along because she has to stay focused on her end game, and in order to do that she will most likely need to marry a nobleman. So, he will be staying behind and looking over Meereen and the newly named, Bay of Dragons. Later, Tyrion tries to give Dany a pep talk and it is obvious he has feelings for the mother of dragons. Dany has also come to fully trust and depend on Tyrion as her advisor. She appoints him Hand of the Queen, placing a brooch on his shoulder to signify his title.

Back at Winterfell, Sansa is approached by Littlefinger who reveals his plan. He wants to sit on the Iron Throne with Sansa by his side. Raising the creep factor, Littlefinger tries to kiss Sansa, but she denies him and walks away. Fans are finally given at least part of the equation of Jon’s parentage after Benjen leaves Bran and Meera at the Wall. Bran touches a weirwood tree and returns to the vision at the Tower of Joy. There, fans see Ned Stark reach the chamber where his sister, Lyanna, is covered in blood dying. She asks Ned to promise her something as she whispers in his ear, but viewers only hear her say, “If Robert finds out, he’ll kill him.” Then a crying baby is given to Ned, a close-up of the child’s face cutting to a close-up of Jon Snow’s face, confirming that Lyanna Stark is Jon Snow’s mother (Hurray!).

In the Feast Hall of Winterfell, Jon is listening to a debate amongst the Knights of the Vale and the houses of the North. Then, the badass that is Lady Mormont rises and calls everyone out, rallying the houses to stand behind Jon Snow as King of the North. Jon rises as everyone cheers and Sansa smiles before she makes eye contact with Littlefinger, looking anything but thrilled, and realizes this could be a major problem. The truth about Jon’s lineage could be an even bigger threat to Littlefinger’s plans, but fans will have to wait another nine months to see how that plays out. At least Dany has set sail for Westeros, and Varys is on her ship too because apparently he either has a twin or a teleporter after getting to Meereen that quickly. Game on. CrypticRock gives The Winds of Winter 5 out of 5 stars. 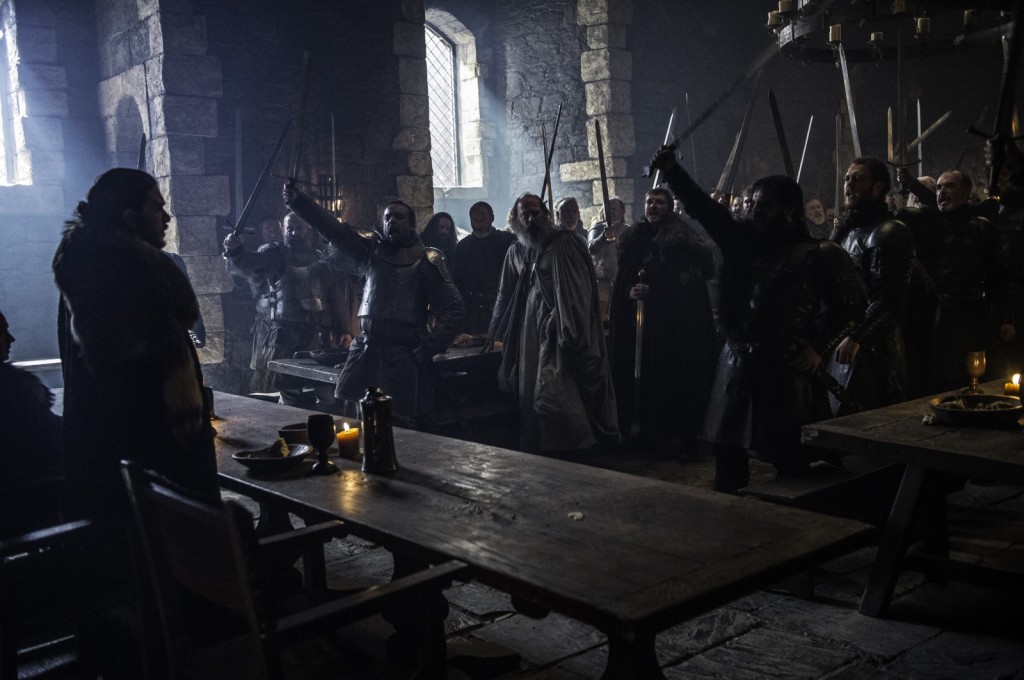