Game of Thrones – Beyond the Wall (Season 7/ Episode 6 Review)

But where did he get the chains? The end is nigh, winter is here, and, with only one episode left, the Night King and his army come face to face with some of our favorite characters. Game of Thrones’ penultimate episode, Beyond the Wall, premiering on Sunday August 20th, felt like a cross between Hardhome and Battle of the Bastards with maybe the slightest bit less intensity since the situation felt all too familiar. But, the episode did not disappoint, presenting a twist that many have speculated could happen. Well, it happened!

Jon and his not so merry men are on their journey north and shots of the majestic landscape are breathtaking. Too bad the boys cannot really enjoy any of that since they are freezing, so they need to keep moving. They catch up with each other along the way, supplying some entertaining and revealing conversations. Gendry is still bitter about the Brotherhood Without Banners selling him off and almost getting him killed. Of course the Hound is nearby to keep things in perspective and tells Gendry to stop whining because they have all been through some gnarly stuff. Tormund reminds Jon that pride sometimes does not get you very far, pointing out that Mance Rayder was a proud man that never bent the knee as Jon refuses to do with Daenerys, but too many people died for his pride. 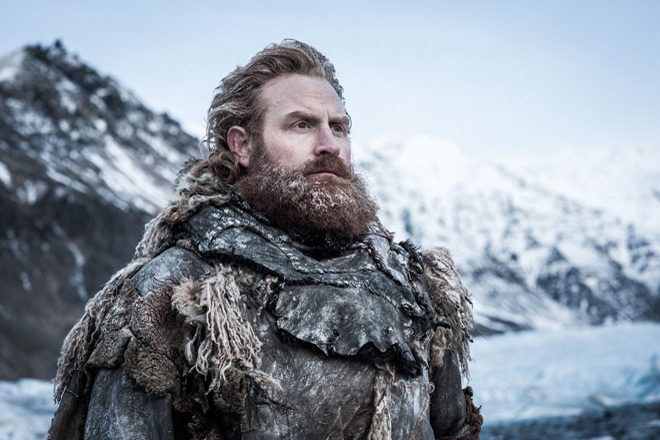 Then it begins. The talk about babies. It is all over the episode and Game of Thrones was not subtle about it at all. As they move along, Jon and Jorah have a bonding moment when they discuss their respective fathers and Jon tries to give Jorah Longclaw, the sword Jorah’s father gifted to Jon. But, Jorah does not accept the sword from Jon, acknowledging the shame he brought to his family. He then tells Jon, “May it serve you well, and your children after you.” Hint hint.

Oh Tormund, you never fail to please. It is clear that Tormund and the Hound need their own spinoff. The Hound’s use of profanity is alive and well as he tells Tormund to “f—ck off” and he even teaches Tormund a new word, “dick.” But, Tormund is not affected by anything the Hound says and decides to tell him about the woman he is jonesing for, how he wants to “make babies with her” (there it is again), and when Tormund describes Brienne, the Hound immediately knows exactly who Tormund has the hots for.

Finally, Beric points out that Jon does not look like his father, Ned, which is true because Ned is not really Jon’s father. This feels like the reveal about Jon’s parentage is going to happen very soon. Both men were brought back to life, Beric multiple times, and so Beric feels a kinship with Jon. Jon does not really care about the Lord of Light, but Beric breaks it down for Jon, showing him that it is very simple really, he fights for life, to keep others alive and defend those that cannot defend themselves. That, Jon can relate to.

Good talks had by all, but when Jon and the other men find themselves in a whiteout storm, they are attacked by an undead polar bear. Is this what happened to the polar bear from Lost? The bear eventually gets set ablaze and dies, but not before three of the unknown men in the group are killed and Thoros is badly injured. He and Beric have the coolest swords ever that light up with fire, a handy thing to have when Beric uses the sword to cauterize Thoros’ wound. They are able to keep going, but now they know that not only humans can be turned into zombies. Hello foreshadowing. 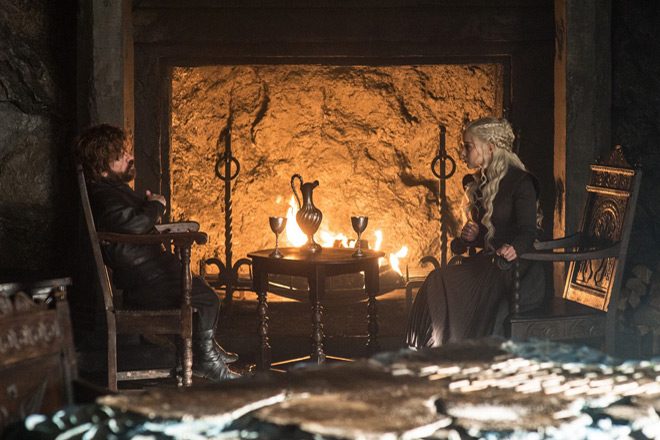 At Winterfell, Arya continues to be intimidating, confronting Sansa about the letter she found implicating Sansa’s betrayal. The entire Winterfell storyline so far seems a bit forced and it is difficult not to want to yell at the television screen at these two sisters who are both smart enough to know they are most likely being manipulated. Old wounds die hard and it is clear Arya and Sansa have grown farther apart, both being so very different from the innocent girls they once were. Neither of them knows what the other has been through, but Sansa knows a rift between her and Arya will not help anyone. She tries to reason with Arya, but Arya only threatens to tell the other northerners about Sansa’s letter, knowing she would lose the faith of the people.

Sansa turns to Littlefinger, which is pretty infuriating considering she knows this is the man not to trust. Of course, Littlefinger plays dumb about the letter and Sansa reveals how nervous she is about the northerners finding out. Littlefinger then plants another seed talking about Brienne and how she is sworn to protect both Stark sisters if one were “planning to harm the other in any way.” The thought that Arya could be a physical threat is now residing somewhere in Sansa’s mind and Arya does not do much to ease Sansa’s concern.

Later, Arya finds Sansa rummaging through her things, finding some of her faces. Arya needlessly shows Sansa just how menacing she can be when, after revealing where she got those faces and how they allow her to be other people, she tells Sansa she could even be her while holding the Valyrian dagger Bran gave her. She flips it and gives it to Sansa who looks a bit shaken. Where is Bran to blow the whistle on Littlefinger and stop this nonsense? When Sansa receives a letter asking her to come to King’s Landing, she knows that ss probably a trap so she decides to send Brienne. This seems like a calculated decision in case Sansa feels as though she needs to do something about Arya and not have Brienne in the way. At least this means a Brienne and Jaime reunion is forthcoming!

Dany is anxious about what will happen to Jon. It is obvious as she discusses Tyrion’s non-hero status while they hang out at Dragonstone. She does not want Tyrion to be a hero because all the men in her life including Jon Snow get all heroic and put themselves at risk. Tyrion points out that all the men she has mentioned are men she has had feelings for. Even he can tell there are sparks between her and Jon, but Dany is in denial. The two then discuss Cersei, and Tyrion tries to reason with Dany, agreeing that she needs to be ruthless and instill a degree of fear, but she needs to offer more than that. When Dany points out how Aegon accomplished a great deal with fear, Tyrion reminds her that it was her intention to break the wheel and be a different type of ruler. When Tyrion brings up how Dany dealt with the Tarlys, he begins to discuss her legacy and the long term. Tyrion is completely on team Dany, but he knows it will take time to build the world she envisions and he brings up her successor and the fact that she cannot have children (or can she?). 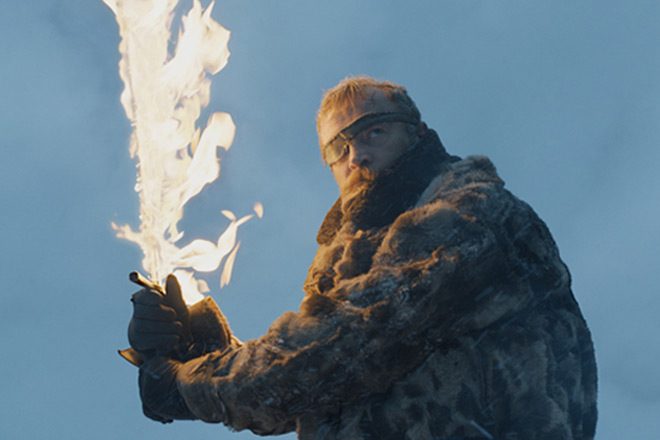 There were some revealing moments in “Beyond the Wall” that showed a solution to defeating the dead army. When Jon and his men ambush a group of wights and a White Walker, Jon kills the White Walker, which then kills all of the wights he created. Jon’s men capture the one wight that does not die, but it lets out a wail that calls the rest of the army. Jon sends Gendry back to Eastwatch to send a raven to Daenerys asking for help, while the others make a run for it across a frozen lake. The group ends up surrounded by wights on a rock when the wights stop advancing once they realize the lake is not stable. The Night King and other White Walkers eventually show up and Beric points out that they can win by killing the Night King, which will kill the rest of his army.

Meanwhile, Dany puts on her snazziest winter wear and heads toward Jon with her dragons. Tyrion does not want her to go, fearing what could happen to her. But, she goes anyway and it is a good thing because after the Hound’s rock throwing backfires, the wights start to move forward. The next sequence is very reminiscent of the battle sequence in Battle of the Bastards, complete with another moment of making everyone think Tormund might be a goner. He survives, and just as the men think they are all doomed, Dany shows up. The dragons get to work as Jon watches in awe. Dany tries to get all the men onto Drogon to get them out of there, but Jon keeps fighting wights that are charging forward. This gives the Night King time to get a javelin and kill one of the dragons, presumably Viserion. The visual effects during this scene are truly stunning and it is difficult to see the mythical creature fall.

Dany’s heart breaks, but she sees what the Night King is capable of. Jon, noticing that the Night King is about to throw another spear urges Dany to leave. Jon falls into the water and Dany flies away with the rest of the men, avoiding another shot from the Night King. Thankfully, Jon makes it out of the water, but we already knew he would make it. He then gets saved by his uncle Benjen who sacrifices his life to give Jon an escape. Jon makes it back to Eastwatch and Dany finally sees the scars on his body implicating what he has been through. She waits by his bed (anyone hear “So This Is Love” too?), and when Jon awakens, he apologizes for the death of her dragon, her child.

There is so much sexual tension between these two that it is pretty obvious Jon wants to make babies with Daenerys. Dany promises they will destroy the Night King together, and after calling her Dany, which already gave all the feels, Jon then calls her “my queen” and verbally bends the knee.

After that sweet moment, we see a bunch of wights inexplicably pulling chains because those are just somehow around, but what’s important here is what they are dragging. It is Viserion’s dead body being taken out of the water he sank into because the Night King is smart and knows exactly how valuable Viserion will be to his army. Yes, Viserion is now undead and with that final shot of his eye opening to that icy blue, things just got really interesting. Bring on the finale of The Dragon and the Wolf. CrypticRock gives Beyond the Wall 4.5 out of 5 stars. 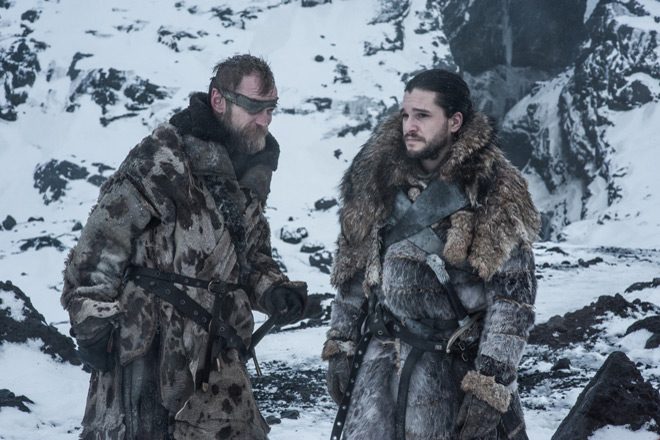