Winter is here in the dead heat of summer and fans across the globe slapped on their best Game of Thrones t-shirts, drank their favorite Thrones inspired cocktails – a shot of “Fire and Blood” anyone? – and basically jumped for joy for the return of the long awaited HBO series. 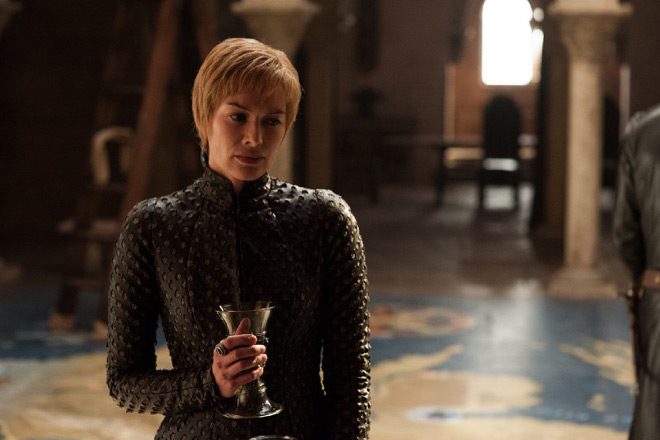 There is a completely different feel going into the seventh season knowing the series only has a certain number of episodes left. A sense of urgency envelopes dedicated viewers as they long to see how everything will play out. That said, the season’s opening episode, Dragonstone, which premiered Sunday, July 16, 2017, did not disappoint, setting up what is sure to be the ride of a lifetime. So in the few words of Daenerys Stormborn of the House Targaryen, First of Her Name, the Unburnt, Queen of the Andals and the First Men, Khaleesi of the Great Grass Sea, Breaker of Chains, and Mother of Dragons, “Shall we begin?”

Revenge is sweet, just ask Arya Stark. Early prediction, the girl is going to kill it this season. Dragonstone’s cold open was everything we could have hoped for and anyone who did not realize Walder Frey was really Arya Stark from the first frame, there is only one thing to say, Shame!

In what was basically a reverse red wedding, all the Freys are gathered for a feast and once the wine is served, “Walder” speaks of how his kin helped him slaughter the Starks, the stabbing of a pregnant woman, the slitting of the throat of a mother of five, but as they all begin to choke on the venom of those words and the poisoned wine, “Walder” tells them they did not kill all the Starks and gives one of many great lines of the episode, “Leave one wolf alive and the sheep are never safe.” And as they all die, except for the Frey bride at “Walder’s” side, Arya reveals herself, telling the girl next to her what to say if anyone asks what happened there, “Tell them the North remembers. Tell them winter came for House Frey.” All hail Arya Stark, Queen of Badassdom.

It is hard to believe anything could counteract the gratification of that moment, but the next scene with Arya has a completely different tone. She stumbles upon a group of Lannister soldiers as she hears one of the men singing. That campfire crooner turns out to be multi-platinum selling Singer-Songwriter Ed Sheeran and it is the oddest moment ever as Arya admits the song is pretty, with Sheeran’s response being, “it’s a new one,” that he probably just wrote in the castle on the hill. 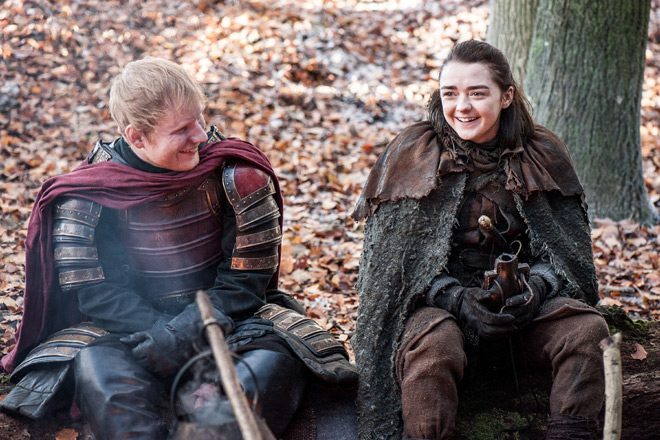 The moment felt out of place, taking the viewer out of the story for a moment with the man singing feeling like Ed Sheeran playing Ed Sheeran rather than him playing a soldier. But, aside from that strange instance, the soldiers share some rabbit and blackberry wine with Arya and she scopes out their artillery, implying they probably won’t live much longer because a girl has plans and she tells them exactly what those plans are. She is going to King’s Landing to kill the queen. That piece of information means no reunion for Arya, Sansa, and Jon in the immediate future, but here’s hoping Arya gets to show Jon how skilled she has become with Needle.

Before viewers see what Jon and Sansa are up to, they are reminded that there is an impending war as the winter’s storm precedes the army of the dead and the Night King. The storm kind of looks like the smoke monster from Lost but is much more terrifying once we see that behind it the army includes giants, most notably, Wun-Wun (sigh). It is a slow walk toward the Wall as it seems they are going in the direction of wherever Bran Stark is headed now that the Night King and Bran are connected. Bran just so happens to have arrived at Castle Black with Meera and has to use his knowledge of acting Lord Commander Edd’s presence at Hardhome to convince Edd he is really Bran Stark. He is allowed in but since Jon is at Winterfell, there is no reunion yet for him and Bran, which also means that tidbit about Jon’s true parentage will not be revealed just yet.

In the Great Hall of Winterfell, Jon is getting down to business. His priority is the war against the White Walkers so he commands everyone gathered to scour for dragonglass. He also calls on all men and women, ages 10 to 60, to train. When the men show hesitation at allowing their daughters to fight, the spitfire that is Lyanna Mormont speaks up, putting the men in their place and quieting their reservations. But, the real tension in this scene comes when Sansa voices her opinions as Jon addresses the crowd, the two having a different stance on what should happen to the Karstarks and Umbers. 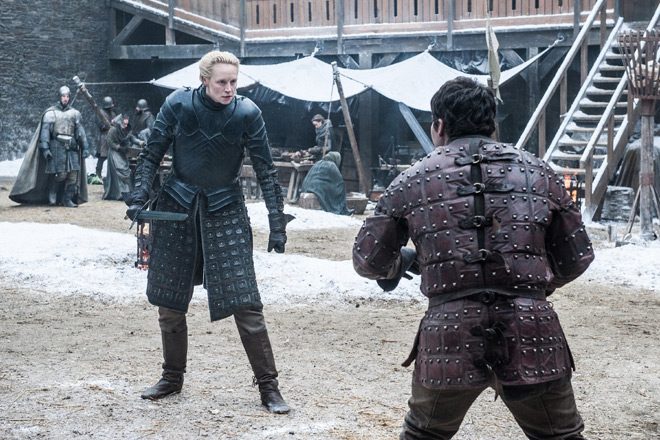 Jon does not want to punish one for another’s treason, knowing how valuable every abled body is, but Sansa disagrees and her public admission of this undermines Jon’s leadership. It’s just what Littlefinger wants to see and the twinkle in his eye and sly smile prove that he will use the tension to create a wedge between Jon and Sansa. But Sansa seems very aware of what Littlefinger wants and knows not to trust him. Thankfully she also has Brienne to protect her. Sansa just wants Jon to be smarter than Ned and Robb so he does not lose his head, but her ways of communicating her concerns seem a bit Cersei like, and she admits she learned a great deal from the mad queen.

Back at King’s Landing, Cersei is plotting. She is already sent a raven to deliver a message to Jon Snow demanding he yield to her rule, but she knows she has enemies in every direction and has a huge floor map to help her navigate exactly how she is going to rule them all. Jaime reminds her she needs allies, which she does not really have because pretty much everyone hates her. It is odd Jaime thinks he can reason with her, but he tries, even telling her they need to talk about Tommen’s death, but she wants to hear none of that because she and Jaime are all that matter now. So, she invites Euron Greyjoy to see if he can be her ally, providing her with ships, but Cersei declines Euron’s proposal, for now, because he is untrustworthy (and revolting).

Poor Sam Tarly. He is not enjoying his time at the Citadel. His life there is pretty much full of loose stool as he pays his dues. It is a straight up poop-fest and no one believes his warnings that they need to find ways to beat the White Walkers, except for the Archmaester (Hi Jim Broadbent!). But, the Archmaester is not too concerned because they have always managed to avoid danger in the past.

Well, there is only so long that can last and Sam has to take matters into his own hands. He sneaks into the locked wing of the Citadel’s library and borrows some books to see what he can find. And bingo, he learns that there’s a mountain of dragonglass at Dragonstone. Since fans know Dany is on her way there, it looks like Dany and Jon will have their first meeting pretty soon. But, another meeting that was not expected appears in the form of Jorah’s Greyscale infected arm as he reaches out to Sam to ask if Dany has arrived yet. It’s a fantastic moment in the episode and sparks the question – could Sam find a way to cure Jorah’s Greyscsale?

Before the audience see Dany return home, the Hound is riding through the Riverlands with Thoros of Myr and Beric Dondarrion. They stop at a seemingly abandoned house for shelter, but the Hound remembers the home where he left a man and his daughter for dead. Thoros and his topknot convince the Hound to look into a fire and somehow the Hound sees a vision of a wall of ice where the Wall meets the sea that Thoros and Dondarrion think might finally convince the Hound of their mission. It will be interesting to see if the men continue north to join Jon after the revelation in the Hound’s vision. 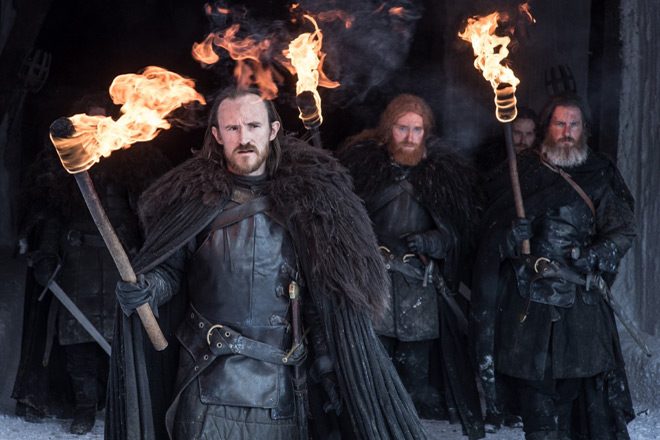 Finally our hero is home. Dany and her squad, including Tyrion, Varys, Missandei, the Unsullied, and her dragons reach Dragonstone and it is an overwhelming experience for Dany. She touches the sand, removes Stannis’s banner as she walks through the castle and the whole sequence is done in silence as everyone else allows her to soak in the moment. Dany finally speaks the most appropriate words after she walks through the battle strategy room that holds the table map we previously saw Stannis use for strategy. “Shall we begin?,” she says and what a beginning this episode has been.

Overall, Dragonstone did not have any major battle sequences, but there were so many scenarios set up that it left us all salivating for more. An episode full of female empowerment, the women of the show are fierce and ready to take on anything in store. The ride will be great indeed. For these reasons, CrypticRock gives Dragonstone 4.5 out of 5 stars. 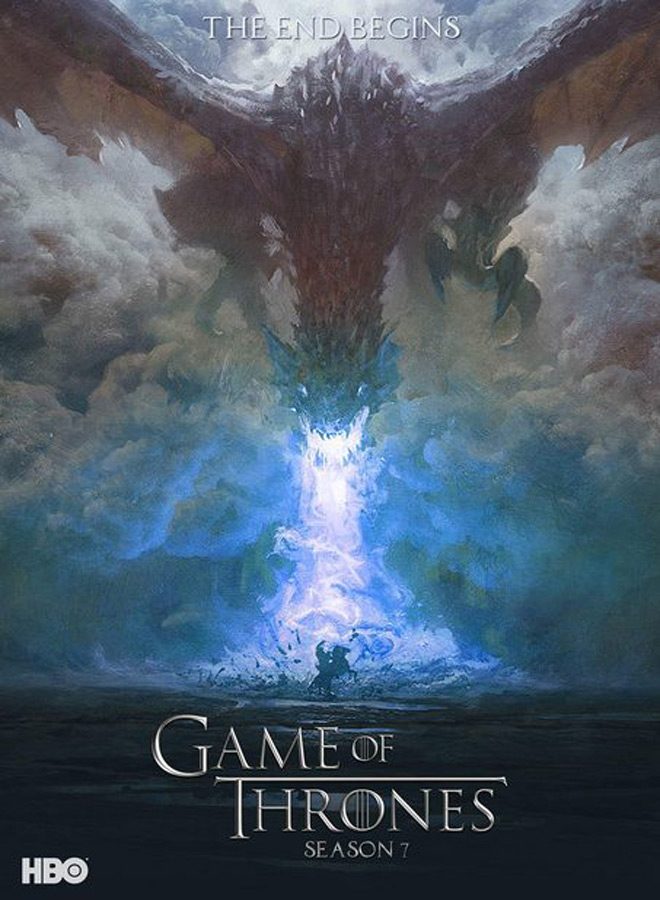