Gendry! Gendry! Gendry! Finally, everyone can stop asking, “What happened to Gendry?”  The Baratheon bastard made his long-awaited appearance on Game of Thrones’ fifth episode, Eastwatch, which once again was an episode full of reunions. Premiering Sunday, August 13, 2017, after fiery battle, the show took a moment to build momentum for the final two episodes, subtly revealing a huge plot detail that is sure to make some waves later in the series.

He is alive! No surprise there. Jamie Lannister deserves a better death than being thrown into a lake. But, Game of Thrones, usually a show to drag things out, got straight to that reveal. Along with Bronn, a man that just wants his gold, Jamie returns to King’s Landing after witnessing the destruction caused by Drogon. Members of the Lannister army are left behind awaiting an address from the Mother of Dragons. As Drogon majestically sits behind Dany, she makes a rousing speech, as queens do. But, not everyone decides to “bend the knee” even though the alternative is death. Randyll Tarly is one of the men that refuses to join Daenerys and his son, Dickon, soon follows. Tyrion tries to reason with Dany, trying to convince her to punish them rather than sentence them to death, but Dany is done playing nice. She has lost too much and now she makes sure everyone knows she means business. 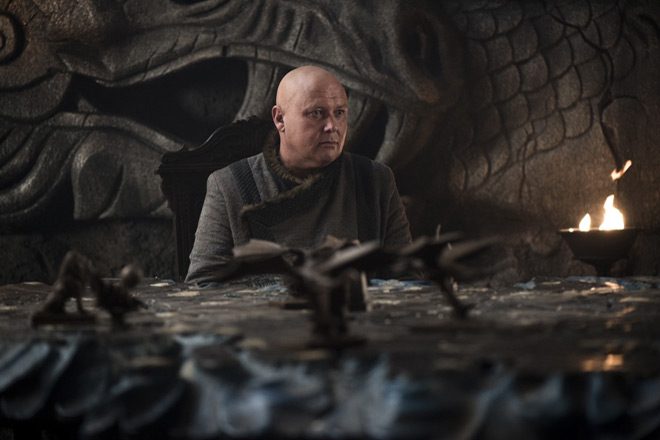 Is Dany morphing into the mad queen? Not necessarily. She’s fighting dirty because in this game she has to in order to survive, but Tyrion and Varys are both shaken by her actions. Varys urges Tyrion to keep her in line, but that may prove difficult. Once Dany returns to Dragonstone, she is greeted by Jon, and Drogon seems to still be ramped up after incinerating so many. Jon tries to keep his cool and approaches Drogon while Dany is still sitting on her dragon’s back. Drogon allows Jon to pet him and as Dany catches glimpses of it, she is completely intrigued.

The moment is fleeting because the eternally friendzoned Jorah returns. Both he and Dany are happily reunited, but their reunion is brief. Jon and Jorah meet and Jon tells Jorah he served with his father who was a great man, but Jorah is all about Dany at the moment and is there to get back to serving her in the only capacity he can.

When Jon receives a raven from Winterfell with Bran warning him the Night King and his army are headed to Eastwatch, Jon barely has time to process the fact that Bran and Arya are alive. He needs to mobilize and decides he has to leave Dragonstone and head to Eastwatch. Dany does not want Jon to leave, seeming to fear for his life. Anyone hearing Beauty and the Beast’s “Something There” in their heads? Yeah, there is definitely something between these two other than DNA.

Jon proves he is good at speeches too, telling Dany he had to trust her, a stranger, and that he is asking her to do the same. Tyrion tries to redeem his Casterly Rock fumble with a new plan. Rather than rushing into battle with the army of the dead, he proposes that they go north of the wall and capture a wight to show Cersei and prove to her that the war is really against the Night King and his army. A dangerous plan? Surely. There is also the slight chance that Cersei is too crazed for power that she will care, but they agree on the plan. Jon is going to Eastwatch, of course, but Jorah joins the cause as well. Who else will end up in what can only be called the suicide squad of Westeros? We soon find out. 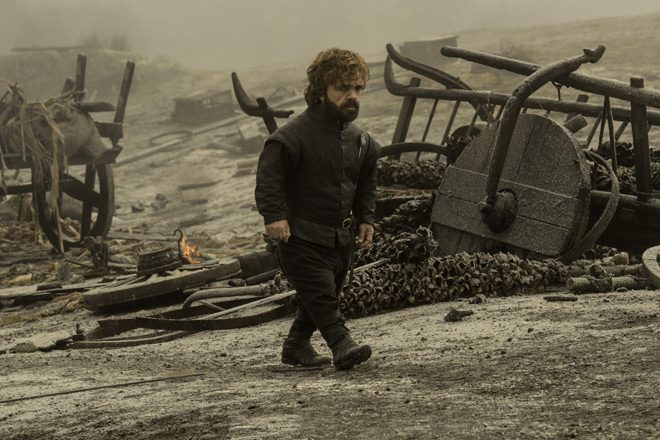 Tyrion heads to King’s Landing with his favorite smuggler, Davos, to try to meet with Jaime and convince him to get Cersei on board with an armistice. There is a lot of tension between the two Lannister brothers after Bronn facilitates a secret meeting. Tyrion tries to talk about how he was outsmarted in his Casterly Rock plan, but Jaime, even knowing Tyrion was not responsible for Joffrey’s death, has a lot of anger towards his brothers actions.

Still, Tyrion manages to get the point across, that whether Cersei wins or not, she essentially loses if the White Walkers get passed the wall and start heading south. Jaime tries to tell Cersei all of this, along with the fact that Tyrion did not kill Joffrey, to give his sister one less reason to hate Tyrion. But, Cersei reveals she already knew about their secret meeting. She also appears to be on board with the armistice for the immediate future, but she reminds Jaime that they should think like their father and they will defeat whatever comes their way. After all, they now have a child to fight for.

Tyrion and Davos do not head back to Dragonstone alone because Gendry is back! Davos takes a walk through Flea Bottom and finds Gendry doing what he does best, making weapons and being sexy. It does not take long for Gendry to be recruited into team Eastwatch. He has been ready for a while, say three seasons? But, time, she is a killer. Just ask Davos, who gives one of the best lines of the episode when he says, “Nothing f—s you harder than time.” You are an eloquent man, Ser Davos. Gendry is ready to go but he does not know how to wield a sword, which should not be an issue since he has a much cooler weapon, a giant hammer. He proves he knows how to use that hammer too when he kills two men on the beach before he heads back to Dragonstone with Tyrion and Davos. 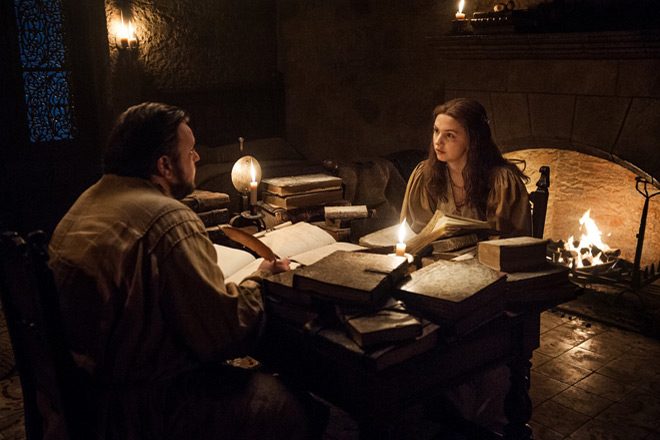 Gendry is really excited to finally be done making weapons for the Lannister army. He is so eager to get to work that he quickly tells Jon exactly who he is and the two bastards have a moment reminiscing about their fathers, who were friends, so naturally they should be too. Bromance of the Bastards anyone? Dany reminds us that our favorite characters have to say goodbye quite often as she watches two men she respects sail off. Tyrion tells Jorah he better return because the queen needs him, Dany does not even let Jorah speak because they do not need words and she finally says her last goodbye to Jon, revealing that she has gotten used to the King in the North. Yeah she has.

Back at the Citadel, Sam is having a really hard time convincing the maesters of the serious threat of the White Walkers. They do not want to listen to an apprentice and Sam soon realizes he is not going to get anywhere. He is about to reach his breaking point and Gilly pushes him over the edge when she shows off her newly acquired reading skills and reads out really boring facts, except one fact is not boring at all. Gilly finds a game changing piece of information. She reads about Rheagar Targaryen’s annulment to his Dornish wife and secret marriage to another woman. Could it be true? Could Jon Snow be a legitimate Targaryen heir? It sure does look like it. Sam does not want to hear any of this though because he is distracted by the nonsense of these maesters that will not do anything about the impending war between the living and the dead. He decides to get the hell out of dodge, grabs a bunch of books, and goes where he can be useful. You got this, Sam!

At Winterfell, there appears to be a bit of tension between Sansa and Arya. Arya feels like Sansa is enjoying her role in Jon’s absence a bit too much and she does not trust that Sansa’s intentions are pure. Arya also does not trust Littlefinger and follows him around, which he notices. He takes advantage of the situation by planting a letter in his room that Sansa wrote back in season one under duress that declared her fealty to Joffrey and ultimately betrayed her father. Littlefinger is counting on Arya finding the letter to further divide the two Stark women. Someone please dispose of this man.

Finally, we get to Eastwatch, where the wildlings have been holding their post. Jon, Jorah, Davos, and Gendry meet with Tormund and he, of course, thinks Jon is crazy for trying to capture a wight. But, Jon knows he needs to prove the threat is real. Tormund, luckily, has a surprise hidden in a cell—The Hound, Beric, and Thoros, who are ready to join up but have done wrong by some of the other men. They all put their differences aside, though, because they know they have to work together to take on the real army of the dead. And so, the men, minus Davos, head beyond the wall. Until the next episode, CrypticRock gives Eastwatch 4 out of 5 stars. 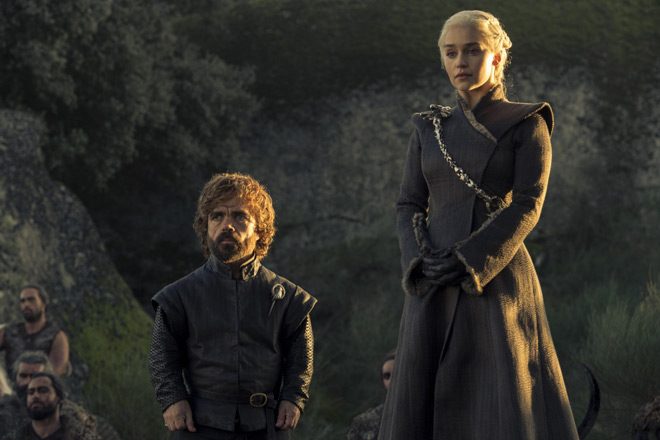