Tyrion loves to talk and boy do we love to hear him speak, but what is really incredible is how quickly Euron seems to get everywhere so quickly. This is not the same Game of Thrones fans had gotten used to, Thronies. In fact, viewers are moving fast through this final season and so much has already happened in just three hours of programming after Sunday, July 30th’s premiere of The Queen’s Justice. 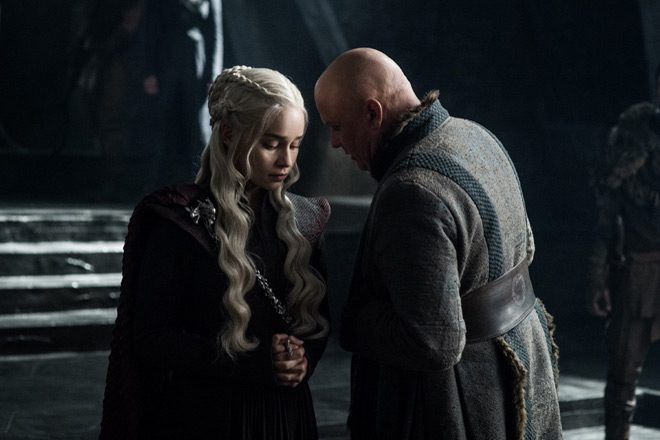 As everyone tries to embrace our suspension of disbelief, they can really enjoy not having these story lines dragged out. Unfortunately, that also speeds up some farewells to characters viewers are not ready to let go of. It is impossible to think that the thorniest of thorns will not supply the best quips everyone has become accustomed to. RIP Olenna Tyrell. You will be sorely missed. But, to soften that blow, Ice and Fire finally meet face to face and Sam cures Jorah on the first try! The show’s third episode was full of ups and downs and had us all wondering when Bran got so creepy?

The episode gets right to the point as Jon Snow makes his way up the path to meet the Mother of Dragons. He and his party are greeted by Tyrion and Missandei and the reunion between Tyrion and Jon gives all the feels because these two men who genuinely like each other have survived through their respective “long roads.” They enjoy some friendly banter until they are interrupted by Dany’s dragons flying by and Jon has the same look he did when he saw White Walkers. Mythical creatures never get old.

Melisandre, on the other hand, is hiding on a cliff and Varys notices. She admits that she did not part on good terms with Jon and Davos and that she is heading to Volantis, but when Varys says she should stay away, she gives him an ominous declaration that she and he both must die in “this strange country.” Varys seems shaken and it will be interesting to see how Melisandre’s role in the great game will play out.

But, back to the important stuff. It is a family reunion y’all, even if they do not know it yet. Jon enters the throne room with Davos in tow and is greeted with the most regal of introductions as Missandei lists all of Dany’s titles. Davos is all of us, not knowing the proper way to introduce Jon, and it just makes him even more lovable. But things do not go exactly as planned as Jon refuses to bend the knee, the tension between the King in the North and the Targaryen queen palpable. She wants him to help her defeat Cersei, but he just dropped a truth bomb that is hard for her to believe. He claims he is not her enemy and it is the “walking dead men” that she needs to be concerned with. Zombie talk does seem far fetched, but when you have three dragons, it should seem just a bit more believable. Luckily, Jon has Tyrion and Davos to vouch for him. 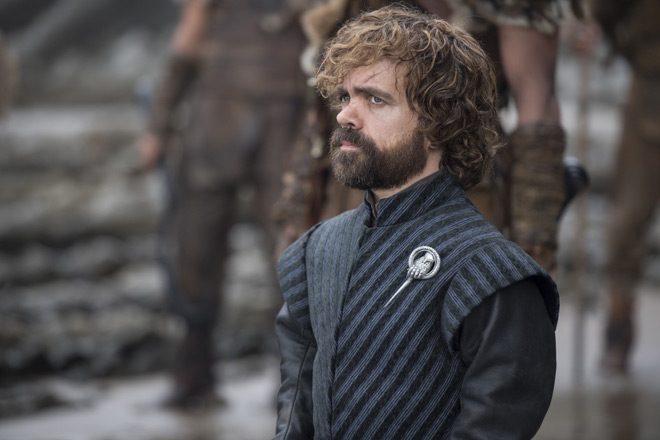 No one broods better than Jon Snow, even Tyrion can see that. Jon still has time to make his case and Tyrion reaches out to Jon with some wise words to help these two forces find common ground. Jon knows his story sounds nuts, but Tyrion admits that he believes Jon because he knows Jon is an honest man. He also knows it is a lot for people to take in and convinces Jon to really take a look at what Daenerys has done and to see that they have more in common than Jon may think. Ultimately, Tyrion gets Jon to change strategy and simply ask for something reasonable, dragonglass. Tyrion’s work is not done and he presents this request to Dany, explaining the usefulness of dragonglass to forge weapons.

Ah, Tyrion, so many phrases of wisdom, he cannot even remember where they came from or if he just made them up. The dwarf of Casterly Rock does manage to convince Dany to allow Jon to mine dragonglass after he makes her see how risky it was for Jon to come to Dragonstone. Jon and Dany end up having a heart to heart of sorts as she draws parallels to both of them losing their brothers, but after they both acknowledge they won’t be joining each other’s causes, Dany tells Jon he can have as much help as he needs mining the dragonglass. It is a step in the right direction for team Dany and team Westeros even if she does not admit she believes in the army of the dead.

At King’s Landing, Euron gets a hero’s welcome as he returns with Ellaria and Tyene Sand, his gift for Cersei – justice. He thinks it will ensure marriage, but Cersei agrees to it only after the war is won. Euron takes the moment as an opportunity to taunt Jaime and ask about Cersei’s sexual preferences, being as vulgar as ever. Cersei now has Ellaria and Tyene as her prisoners and with some snazzy pink lipstick talks about the ways she has thought about getting her revenge for the death of her daughter. The decision Cersei makes is fitting but also surprising and less gruesome than expected. She kisses Tyene with the same venom lips Ellaria used on Myrcella, using an eye for an eye tactic and leaving Ellaria to watch her daughter die.

Between her first triumph over Dany and getting justice for the death of her daughter, Cersei is feeling confident and aroused since we soon see her getting it on with Jaime and flaunting their intimacy when a chambermaid knocks on Cersei’s door. But, Cersei is also proving she is as cunning as her father and decides that she needs to ensure she has the Iron Bank of Braavos funding her cause. Since a Lannister always pays their debts, Cersei must prove that to be true, which she does. 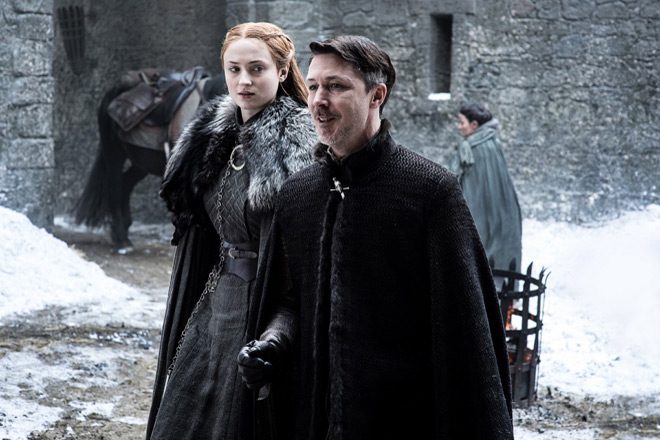 It is too bad Tyrion was not one step ahead of Cersei because his speech about how he used to sneak prostitutes into Casterly Rock and how that would be the way the Unsullied would overrun his home seemed hopeful for team Dany. But, Cersei had to go and ruin Tyrion’s plan by sending Euron’s fleet to Casterly Rock to take on the Unsullied, while Jaime and his army sieges Highgarden, taking their money and supplies and taking down another of Dany’s allies.

Olenna Tyrell, you are a unicorn. The Queen of Thorns waits for Jaime and the two have a very civil conversation discussing the Tyrell’s defeat and her impending death. Jaime admits that Cersei wanted to use a more violent form of execution, but he convinced her to pick a more humane method – poison. Olenna can see that Jaime is loyal to Cersei because he loves her and calls him a fool, knowing the monster Cersei is and that she will be the end of Jaime. He does not want to listen to her and so they get on with her death, but once Olenna has the poison in her, she has the last word, leaving Jaime to pass on the truth of Joffrey’s death and her machinations in causing it.

Over in Winterfell, Sansa is doing a great job leading in Jon’s place, but Littlefinger keeps whispering in her ear, trying to tell her what’s up. Do not try to mansplain, Littlefinger! Sansa is smarter than she lets on, but as Jon so aptly tells Tyrion, she is starting to let on, and it is glorious. What is not so glorious is the return of Bran to Winterfell. Yes, it is exciting to see the two Starks reunited, but Bran seems so bored because he has totally gone full Three-Eyed Raven. But, his behavior gets super creepy when he speaks with Sansa and explains his newly minted role as the seer of everything, bringing up her wedding night and basically telling his sister how great she looked the night she got raped. Whoa, Bran, that was really uncomfortable.

Thankfully, fans get a happier conversation when the Archmaester reveals that Jorah and Sam’s experiential procedure went well and Jorah is allowed to leave the Citadel cured. He is on his way back to his queen and boy does she need all the help she can get. Cersei-2, Dany-0. Until next time, CrypticRock gives The Queen’s Justice 4.5 out of 5 stars. 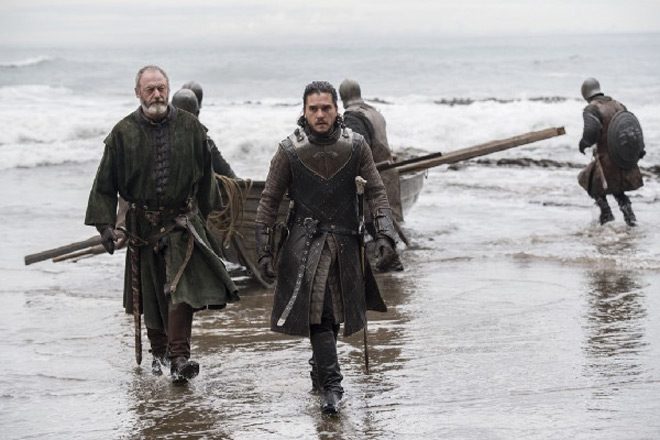