Is it really nearing the end of the season already? The first four episodes of HBO’s Game of Thrones have gone by in a flash. No, really, the pace continues to reach ludicrous speed and there is so much to take in! – characters that have not seen each other in years and threads that have been woven unraveling before our eyes. But, what remains is the fact that Game of Thrones knows how to do epic and it did not disappoint on Sunday, August 6th, 2017 in one of its shortest episodes, The Spoils of War. 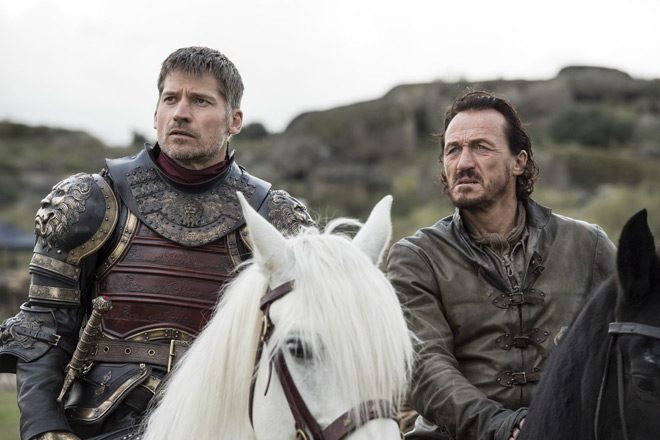 Despite the leaked footage of the season’s fourth episode, nothing could take away the magnitude of what fans received. Finally, the fierceness of at least one of Dany’s dragons would be visualized in a battle sequence and it was hot fire (pun intended). But, there was also the return of another Stark that gave us the reunion viewers have been waiting for.

Before Arya Stark returns to Winterfell, we see Jaime on his way back to King’s Landing along with Bronn and some of the Lannister men as they bring what is left of the riches from Highgarden back to King’s Landing. Jaime still seems pretty angry about the bomb Olenna Tyrell left him with, but he needs to get the acquired gold back to King’s Landing and gather the harvest from the local farmers. Meanwhile, Cersei tries to see if she can get a new loan to hire mercenaries because she is not playing around, but the gold she owes the Iron Bank must arrive safely first.

In Winterfell, Bran finally does not need to be carried anymore because he is now cruising around in a wheelchair, but before he tells Meera it has been nice knowing her, he gets a visit from Littlefinger and that just spells trouble. Thankfully, Bran sees everything now that he has pretty much shed his former human self and become the Three-Eyed Raven.

When Littlefinger tries to manipulate Bran by offering the same Valyrian steel dagger that was intended to kill him, Bran throws Littlefinger off kilter when he shuts down Littlefinger’s pitch with “Chaos is a Ladder,” a callback to season three when Littlefinger utters the phrase to Varys. The glimmer is knocked right out of Littlefinger’s eyes as he realizes Bran knows more than he thought and that could be a problem.

A girl returns home. Arya arrives at the gate and is held up by a couple of guards that do not believe who she is and keep telling her to “F– off.” Good thing she drops a couple of names that Sansa recognizes when Arya disappears and the guards inform Sansa that she asked for Maester Luwin and Ser Rodrik, two names that prove to Sansa that Arya has returned and she knows exactly where her sister is—the family crypt. Sansa and Arya were never the closest but after what they have both endured, they embrace each other and are genuinely happy to see each other. Arya asks if the rumors that Sansa killed Joffrey are true and when Sansa admits she wishes she had killed the psycho-king; Arya confesses that she wishes it too since he always maintained the number one spot on her kill list. Yeah, things sure have changed. 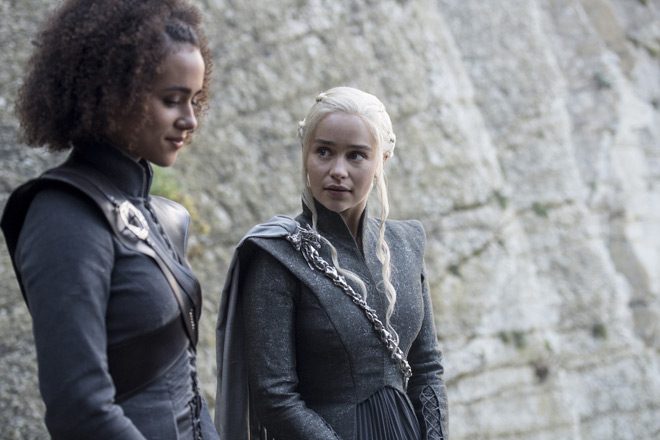 Sansa reveals that Bran has also returned to Winterfell and the two go out to where Bran is sitting near the weirwood tree being silent and creepy, which seems to be his new normal. Bran tells Arya he is glad she is home and that he “saw” her at the crossroads, which Sansa explains is part of Bran’s new set of skills because he has visions. Bran then gives Arya the Valyrian steel dagger, which he reveals came from Littlefinger. Sansa is suspicious of Littlefinger’s agenda, but she also seems a bit jealous that Bran wants Arya to have the dagger. Perhaps the sibling rivalry between these sisters is not over.

If there is anything the audience has learned about Jon Snow is he performs well in a cave. Back at Dragonstone, Jon brings Dany into a cave to show her the dragonglass he will need for the Great War, but he takes her further to also prove to her that the threat he keeps warning everyone of is real. Carvings made by the Children of the Forest show them with the First Men united in defeating the White Walkers and so Dany vows to be Jon’s champion and support his cause as long as he bends the knee. Jon is really stubborn about this knee business knowing his people will not accept a southern ruler, but Dany, being the Khaleesi she is, tells Jon if their king accepts her, they will too. The chemistry between these two is palpable, just ask Davos, but the moment is fleeting because Dany gets the bad news about Highgarden and she is done with clever. It is time to be the dragon.

In the courtyard of Winterfell, Arya shows up while Brienne and Podrick are sparring and decides she is a better match for the tall warrior. It is a fantastic scene as Arya shows all the skills she has learned over the years from her various teachers. There is a whole lot of Syrio in how she moves during this sparring sequence and it gives us another callback to the first season. But, what makes this such an exciting moment to watch is the fun Arya is having showing just how much she has learned and it is something Sansa and Littlefinger notice as well. They both watch from a balcony as Arya bests Brienne, but not before Brienne almost knocks the air out of her. The fight proves to Brienne that Arya is a worthy opponent and there is a mutual respect between the two. After all, Brienne did best the Hound. 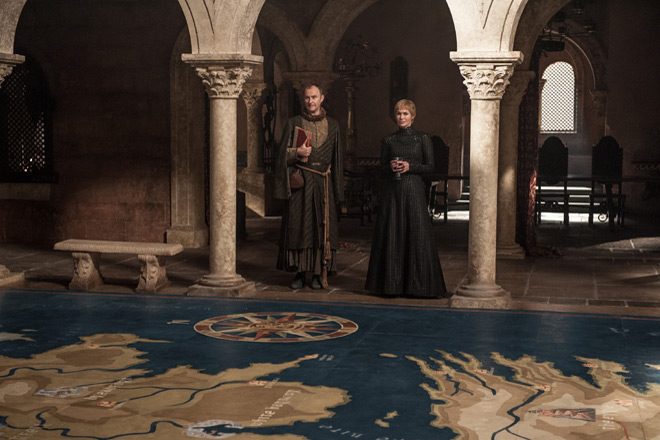 It was an episode of reunions, but the one between Theon and Jon was full of tension as Jon reveals he will not kill Theon because of what he did for Sansa, as well as Theon revealing Yara was taken by Euron, and has come to ask Dany for help. But, she is long gone. What comes next is something fans of the series have been anticipating for years, a dragon’s reign of fire. Bronn is the first to hear the rumblings of the Dothraki, which sound like a storm approaching, and boy is it a storm they get. The Dothraki charge while Jaime’s men scramble to get their weapons. It seems pointless once Drogon flies in with Dany on his back. She utters, “Dracarys” and Drogon begins turning flesh to ash as he torches men, crops, and anything else in his wake.

The sequence shows the sheer chaos of the moment with men on fire while Bronn runs to Qyburn’s giant crossbow. As Bronn tries to load an arrow into the contraption, Jaime looks dazed by the charred men and ash surrounding him. Bronn finally shoots an arrow toward Drogon and misses, but on his second attempt succeeds in wounding the dragon. Once on the ground, Dany tries to remove the arrow and Jaime sees an opportunity to take down the Mother of Dragons. He grabs a spear while Tyrion watches and mentally pleads for his brother to flee, but Jaime charges forward. Drogon may be hurt but he is still very much alive and blows fire at Jaime who is thrown off his horse by Bronn. The two fall into a lake and Jaime’s sinking body is the last shot the audience sees.

Of course Jaime is not dead, he can not be! But, will he be a prisoner of war once again? Things seem to be looking a little better for Dany and just a bit more worrisome for Cersei. All this said, until the next episode, CrypticRock gives The Spoils of War 5 out of 5 stars. 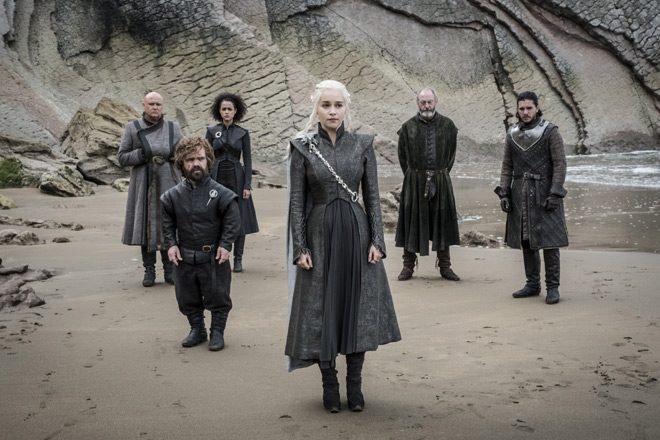