Game on! David Benioff and D.B. Weiss are proving the pace of HBO’s Game of Thrones is at full throttle as the show reaches its endgame. After the season’s first episode focused on putting its chess pieces in place, Game of Thrones accelerated right into the first battle in the war for Westeros on Sunday, July 23, 2017. But, before that explosive ending, the season’s second episode, Stormborn, included more set ups, some revelations, sound advice from a wise woman, another gag-worthy scene, super steamy sex, and the return of a long-missed direwolf. 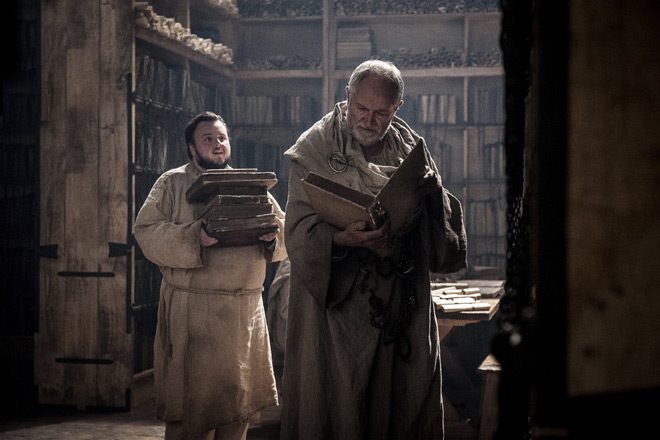 One of the biggest themes of the episode is the past, whether it is fallout from someone’s previous actions or a person’s family history, there are plenty of reminders in Stormborn. The episode opens at Dragonstone with a raging storm similar to one that took place when Daenerys was born. The Mother of Dragons is the first to revisit the past as she accuses Varys of being an opportunist and changing his loyalty when it suits him. But, Varys counters her claims with a fantastic speech declaring his loyalty lies with the people and that he believes she is the best hope for Westeros. Whether Varys can be trusted remains to be seen, but one thing we know to be true is that if he does betray the Khaleesi, he’ll burn for it.

It is incredibly gratifying to see the wheels in motion for the highly anticipated meeting between Dany and the man she has never heard of before, but who we know is her nephew, Jon Snow. Melisandre arrives at Dragonstone to play her part in the great game, telling Daenerys that she believes both Dany and Jon have roles to play. After all, Missandei helps clear up the prophecy of the Prince Who Was Promised by telling her queen that the word “prince” is gender neutral and therefore could refer to a man or woman. Melisandre urges Dany to meet with Jon to forge an alliance and, with a little help from Tyrion and his validation of Jon’s good and honorable nature, Dany agrees to meet with him, but not before including her command that he “bend the knee.”

This “bend the knee” thing must be getting old for Jon Snow. Both Dany and Cersei have now asked him to bow to their rule, but all he wants to do is defeat the Night King and his army of the dead. But, the note he gets from the Mother of Dragons is written by Tyrion who includes a line said to Jon in season one, “All dwarves are bastards in their father’s eyes.” Jon and Tyrion have some history, but Jon also values Sansa’s opinion since she has spent the most time with Tyrion. She vouches for the only decent Lannister, but thinks it is still too risky to go to Dragonstone. Davos also points out, quite logically, that fire is a useful weapon against the White Walkers and Dany’s dragons could be extremely helpful. Still, there is hesitation about leaving Winterfell and going south to Dragonstone knowing the history of the last time a Stark went to visit with a Targaryen and wound up burned to death. 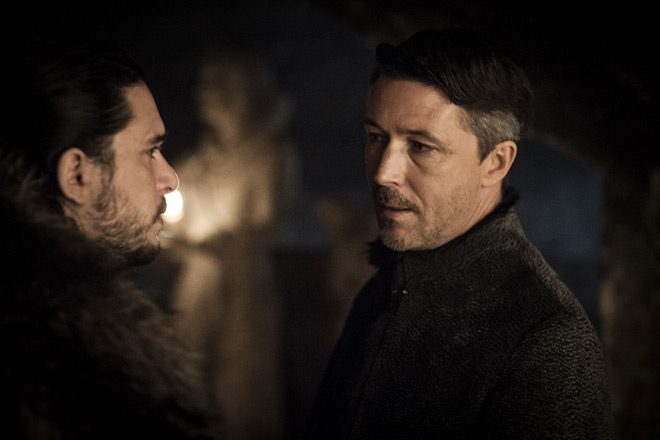 Ultimately, Jon decides to go south, taking the unpopular route and doing what he believes is right even though the other northerners have some deep rooted concerns. It is Sam’s message that becomes the deciding factor, as it reveals that there is an abundance of dragonglass at Dragonstone and forming an alliance with Dany may be Jon’s best bet against the White Walkers.  With Sansa left in charge in Jon’s absence, Littlefinger seems over the moon with Jon out of the way. He makes it no secret that he wants Sansa. He wants her so badly, he makes the mistake of telling Jon he loves Jon’s sister the same way he loved Catelyn Stark. All that admission does is anger Jon enough to have him strangle Littlefinger against a wall, which brings back a memory of a similar scene earlier on in the show between Ned and Littlefinger. Jon seems more aware though of Littlefinger’s two-faced, treacherous nature.

Back at King’s Landing, Cersei is proving she is a master manipulator, spewing her political propaganda at the nobles that are easily taken over by the xenophobia Cersei instills when she speaks of Daenerys bringing the Dothraki to their shores. She also lists Dany’s violent actions against the noblemen in Slavery’s Bay out of context, making the Targaryen queen sound very similar to the Mad King. Meanwhile, Jaime tries to appeal to Sam’s father, Randyll Tarly. It is a hard sell since Randyll is loyal to the Tyrells and does not want to break his oath, but Jaime too uses the fear of the Dothraki to sway Randyll to pledge his allegiance to Cersei.

It looks like Sam and his father will be fighting on opposite sides. For now, Sam is busy trying to figure out how to save Jorah once he learns he is the son of Jeor Mormont, his maester predecessor. Sam is a rule breaker and once again has to get sneaky to do the right thing, treating Jorah’s Greyscale with a risky and painful method that is hard to watch. But the Game of Thrones writers seem to really want to gross out fans as the scene segues from puss to pie and then to a character that always elicits a smile, Hot Pie!

Arya reunites with her old friend, but she does not seem excited at all to see him. She is a bit distant but eventually learns that Jon is now King in the North and that seems to reignite some hope, changing her course from King’s Landing to Winterfell. Along the way, she crosses paths with another old friend, her direwolf, Nymeria, that she had to send away in season one. It is a heartbreaking scene where Nymeria eventually realizes she is looking at Arya but has a pack of her own and has moved on, leaving Arya alone on her journey north.

Back at Dragonstone, Dany’s allies are ready to strike as they all want to fight for their own reasons, but Tyrion being the voice of reason, tries to convince them that killing thousands of people with dragons will only legitimize the fears those people already have. They need to be more cunning in their methods. While Dany eventually gets the support she needs, Olenna Tyrell reminds her that while Tyrion is a clever man and his council is valued, she cannot forget that she is a dragon.

Sweet sassy-molassy! Before the battle tactics are set in motion, fans get the scene they have been waiting for between Missandei and Greyworm. It is both awkward, intimate, and extremely sexy as Greyworm admits that Missandei is his weakness and his feelings for her make him vulnerable. But, even though Greyworm does not have much going on between his legs, he grows enough balls to kiss Missandei and the two disrobe to look at each other, eventually moving further than first base. Greyworm must have heard about Jon Snow’s special skill because it looks like he leaves Missandei very satisfied despite his shortcomings. 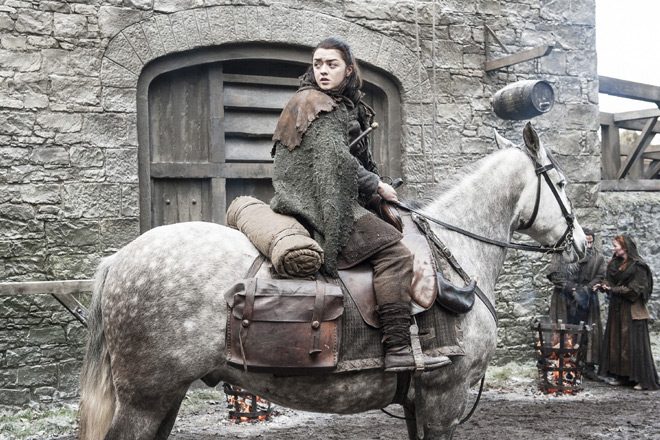 Jon is headed south, Arya is headed north, the Unsullied are on their way to Casterly Rock, while Yara, Theon, Ellaria Sand and her Sand Snakes are headed to recruit the Dornish army. But, before Ellaria and Yara can get busy they are ambushed by Euron and his fleet. It is a full on bloodbath and Euron shows how completely psychotic he is. He manages to capture Ellaria and her daughter Tyene, along with Yara, which we now know are the gifts he set out to get for Cersei.

Euron manages to also kill the other Sand Snakes with their own weapons, eliminating the whole Dorne plotline. Their dead bodies are a gruesome site that Theon, who goes full on Reek, witnesses after he jumps ship. With Euron’s help, Cersei has won the first battle and leveled the playing field, proving this will not be an easy fight for the Targaryen queen, especially now that Qyburn has revealed a weapon that can puncture the skulls of dragons. Cersei 1, Dany 0. Until the next episode, CrypticRock gives Stormborn 4 out of 5 stars. 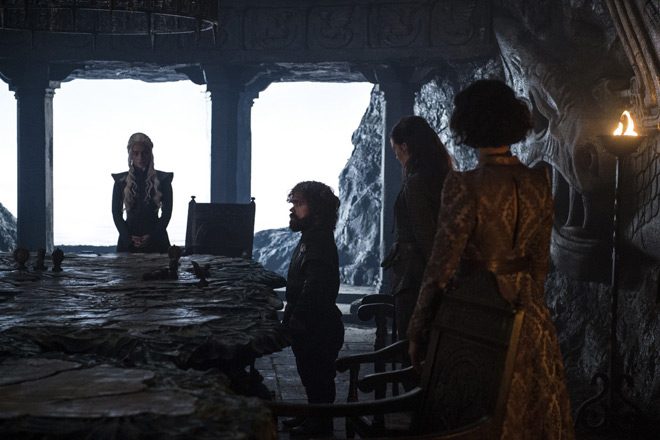