George A Romero’s Land of the Dead 10 Years Later

George A. Romero first introduced the world to his vision of zombie terror in 1968 with the classic film Night of the Living Dead, spawning a saga that has continued for nearly five decades. Filmed in Toronto, Land of the Dead was the fourth chapter of the series birthed from the imagination of Romero, continuing the story that began with Night of the Living Dead, 1978’s Dawn of the Dead, and 1985’s Day of the Dead. The original films become legendary, but after two decades with nothing new, Romero’s legion of fans pined a continuation of the story with a fourth film. A few working titles, such as Twilight of the Dead, Dead City and Dead Reckoning, had been thrown around for years before filmmakers finally settled on Land of the Dead. 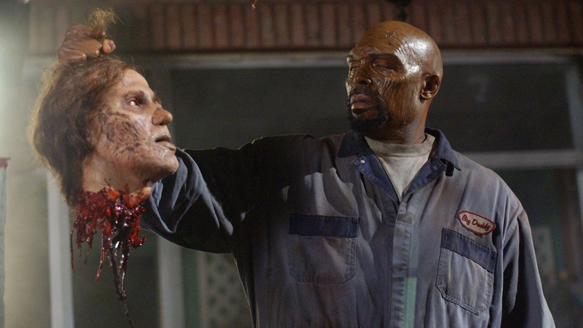 Finally, after years of speculation, the film became a reality, and on June 24, 2005, through Atmosphere Entertainment, Land of the Dead hit theaters across America. With a Dawn of the Dead remake and the comedic Shaun of the Dead released a year earlier, some might say the market was ripe for Romero’s return to the genre he helped create. Nevertheless, expectations for Land of the Dead were high with fans, and thanks to the help of a quality cast starring John Leguizamo (Super Mario Bros. 1993, Ice Age series), Asia Argento (Demons 2 1986, xxx 2002) Dennis Hopper (Easy Rider 1969, Apocalypse Now 1979), and then rising star Simon Baker (The Devil Wears Prada 2006, The Mentalist TV series), along with makeup artist Greg Nicotero (The Walking Dead TV series, Day of the Dead 1985), Romero proved, once again, that he was the master of zombie films.

The film begins twenty years after Day of the Dead as society tries to reclaim some normalcy and live in a dangerous world overrun by the undead. The action takes place in Pittsburgh, Pennsylvania, where the rich and powerful reside in a protective haven known as Fiddlers Green while the lower class live on the outskirts and make ends meet in the slums. After a good amount of time has passed, the zombies begin to slowly adapt to their environment, and even learn survival and defensive tactics, a story arc that originated in Day of the Dead with Bub (Sherman Howard), the first zombie trained by a scientist and the first of the undead to shoot a gun. Following their ring leader, Big Daddy (Eugene Clark: Night Heat 1985, 3 Men and a Baby 1987), the zombies march toward the walled-in city. Meanwhile, politics are a dangerous issue inside Fiddlers Green. Cholo DeMora (Leguizamo) has been doing the dirty work for Kaufman (Hopper), the man in charge of everything. After years of service, Cholo suggests getting his own place in the resort-like setting of Fiddlers Green,, but Kaufman turns him down. 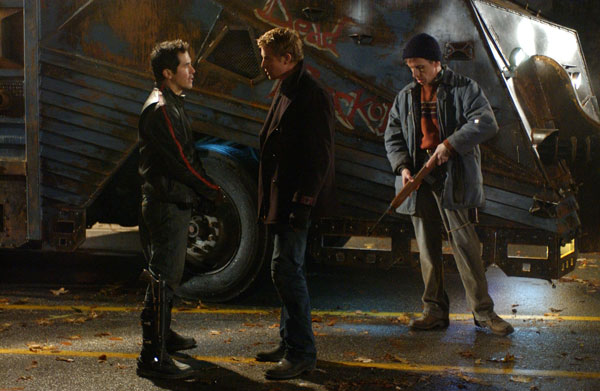 Determined to get revenge, Cholo hijacks Dead Reckoning, a heavily armored, zombie proof tank created by Riley Denbo (Baker) that is loaded with weapons of mass destruction, and threatens to use it on the main city, killing thousands of innocents. Meanwhile, the much more levelheaded Riley merely wants to get out of dodge to start a new life elsewhere with his sidekick, Charlie Houk (Robert Joy: Desperately Seeking Susan 1985, CSI: NY series), and his newly acquainted possible love interest, the strong-willed hooker, Slack (Argento). Pulled right back in, Riley is ordered by Kaufman to find Cholo, stop him, and recover Dead Reckoning. With an army of undead already approaching, the people inside Fiddlers Green must defend themselves to the dangers that await them, both inside and outside the so-called sanctuary.

Once again, George A. Romero put his heart and soul into this project, as he is a fan of the genre as well as a writer and director. There was so much attention to detail and fantastic cameos as well. For example, longtime friend and colleague Tom Savini was called on to reprise his role of Blades from Dawn of the Dead, but this time as a zombie. Because Romero was so impressed with Shaun of the Dead, he had Simon Pegg and Edgar Wright portray the Photo Booth Zombies in the film. Even his own daughter, Tina Romero, had a quick role as a soldier shooting a zombie in the film. Casting Asia Argento was fitting as well, seeing Romero and Argento’s dad, Italian Horror maestro Dario Argento, have a working history together on Dawn of the Dead, as well as 1990’s Two Evil Eyes. Staying true to Horror’s past, the scene with the herd of zombies crossing the lake was Romero’s personal homage to 1962’s Carnival of Souls. 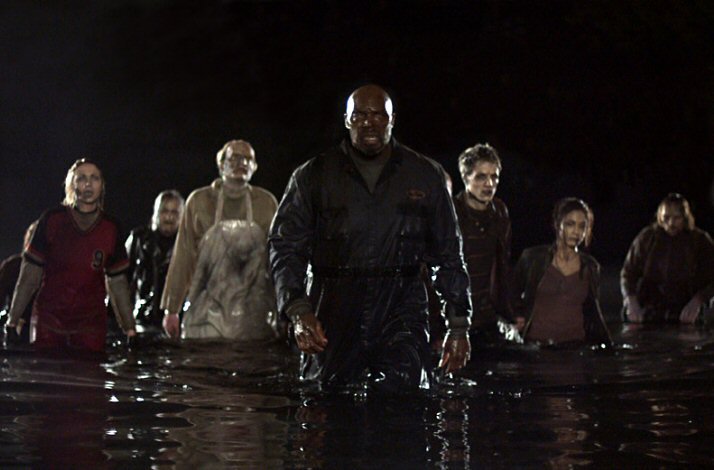 Upon its release, Land of the Dead caused quite a stir, as many moviegoers claimed that zombies could never learn or become anything other than flesh eating monsters. Perhaps the current audience was not ready, or were too young to remember Bub, the zombie that started it all. Regardless, the box office numbers were fairly impressive, grossing at just over forty-seven million dollars, becoming the highest earning Dead film to date. It was also the first in the series to receive an MPAA rating and even spawned the video game, Land of the Dead: Road to Fiddler’s Green. Many fellow filmmakers and film critics had more positive feedback, saying the film was well thought out, and that it was about time for this progression. Guillermo del Toro (Pan’s Labyrinth 2006, Hellboy 2004) compared Romero to Michelangelo, saying he started another ceiling, and calling this movie a momentous occasion for film lovers. Like most highly anticipated movies, Romero had to make some adjustments along the way. The first potential studios was Twentieth Century Fox, who insisted on the title Night of the Living Dead, which Romero refused. He preferred the aforementioned Dead Reckoning. After an attempt to compromise with Night of the Living Dead: Dead Reckoning, Romero decided to not do business with Fox altogether, which eventually led to a deal with Universal Studios.

These are the reasons why Romero is so special, always targeting his films to die hard fans like himself while at the same time, staying true to his vision. It is an admirable trait that continues to have an impact to this day, inspiring those around him, including Nicotero and his own success with The Walking Dead. With a diet of cigarettes and coffee, George A. Romero is known as a peculiar yet brilliant and humble man. There is a reason many people do not turn down a chance to work with him, and often return on other projects. Since Land of the Dead debuted ten years ago, Romero has since continued, creating 2008’s Diary of the Dead and 2010’s Survival of the Dead as new editions to the series. Although not as popular with the public as its predecessors, Land of the Dead still stands on its own, delivering a story of wit, unpredictability, and of course, bloody and gory violence. As a matter of fact, the original cut was so gory that it had to be trimmed drastically, although a director’s cut was finally released on DVD on October 18, 2005, with more of those stomach turning effects Romero is known for, such as those in the climax of Dawn of the Dead and Day of the Dead. 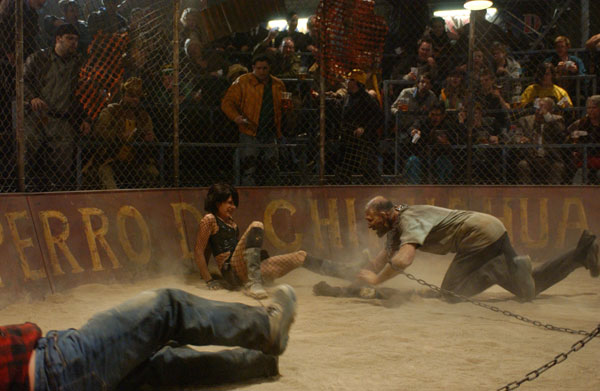 Above all the flesh eating, Romero continued to provide compelling social commentary. Where Dawn of the Dead was a visionary look at the consumerism that ballooned in American culture in the ’80s, Day of the Dead showed humans as a culture of beings who simply cannot work together for the better good. Many could look at the commentary of Land of the Dead being that, even in a post-apocalyptic world, class segregation still applies, where the rich run everything and the average act as their servants. Whatever one wants to think, the bottom line is that Romero laid the groundwork for zombies dominating Horror culture in modern cinema. Land of the Dead simply reignited the fire for a whole new generation, and that fire is still burning ten years later. 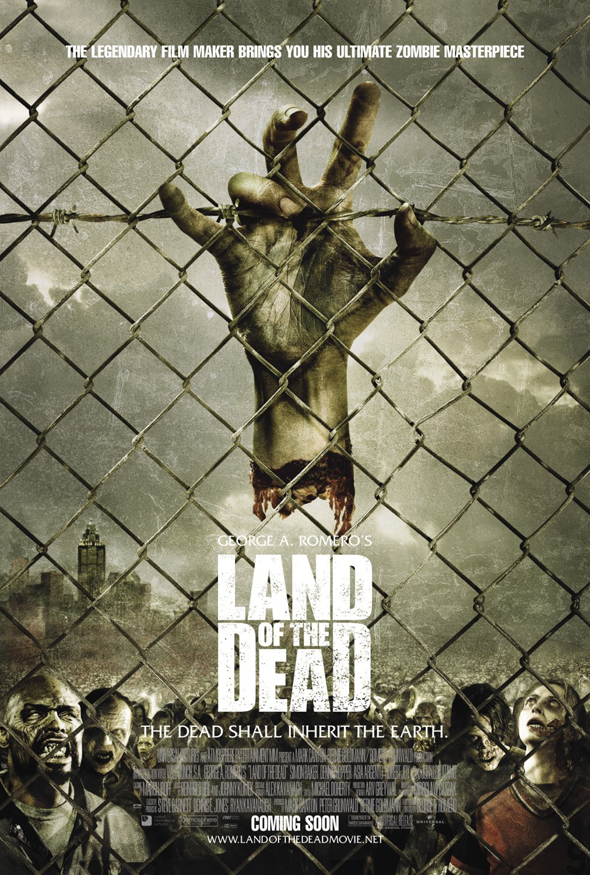 Purchase Land of the Dead on Blu-ray/DVD on Amazon

The Walking Dead – Season 11 (Episodes 9-16 Review) Halestorm – Back From the Dead (Album Review)
Like the in-depth, diverse coverage of Cryptic Rock? Help us in support to keep the magazine going strong for years to come with a small donation.