What do Saturday detentions and war have in common? Everyone is dying to get out early. The same goes for a very diverse group of five high school students who find themselves wasting a Saturday in detention being monitored by a very intimidating wheelchair-bound teacher that appears to be dealing with his own destructive inner demons.

Released on February 7th to multiple video and demand platforms via Midnight Releasing, Getting Schooled is the fun B-Horror Slasher film. Written by Chuck Norfolk and his brothers, Tom and Scott Norfolk; all of whom had previously worked together on a similar writing project, the 2014 B-Horror film Haunted Trailer, it was Chuck who again took responsibility for directing this new film and Lucky Chucky Productions for producing it.

The date is April 20, 1983, and with it taking place on a date such as that, viewers cannot help but make the connection that the movie may be giving them a hint as to what state of mind they may need to be in to best appreciate its over-the-top, cheesy but delightful hilarity and horror; though certainly not necessary. The film opens with a really bitchin’ dance solo that embodies everything viewers have come to know and love about 80s cinema. Footloose and fancy-free librarian, Miss Ringward (Solinger), whose name cannot help but suggest that Norfolk may be making a reference to one of the most well-known and recognized 80s teen movie stars, Molly Ringwald, is blaring her boombox in the library as she dances around in her overstated 80s ensemble, putting books away and having fun; until the music stops and she hits the ground, suffering a fitting fate that leaves her with one killer headache.

Being confined to a classroom is no way to spend a Saturday, but clashing classmates such as social outcast, Julie (Leal); rebellious bad boy, Rusty (Ruiz); dumb jock, Mike (Byrd); nerdy Asian, Shelly (Ly); and snobby cheerleader, Hillary (Tyler), find themselves forced to spend the day with each other while being monitored by unbalanced and aggressive teacher, Mr. Roker (Long). When their Saturday detention turns into war games with a crazed, wheelchair-clad Vietnam Veteran suffering from Complex PTSD and flashbacks, this motley crew of high school students must rely on their individual strengths to bring down this relentless Black Ops killer hell-bent on executing all of his perceived enemies; which just so happens to be anyone in the school on that day. Will they be able to put their preconceived personas and judgments aside and work together to bring down this totally mental dude that just will not quit trippin’?

Getting Schooled is like a hella’ radical ’80s Teen film with a pinch of some totally righteous Horror, outfitted with all of the necessary clichés, characters, fashions, fight sequences, gore, interesting deaths and soundtrack, that has been dialed up to an 11. Just imagine if this movie were the love child of 1983’s The Breakfast Club and 1990’s Jacob’s Ladder, who then had a movie baby with the love child of 1990’s Home Alone and just about any 80s Slasher film ever made. Norfolk did such an excellent job of paying homage to ’80s cinema by overemphasizing all of the elements which made the ’80s such a fun decade for films.

The cinematography smoothly allowed the story to unfold, and could even continue to tell the story while dialogue was lacking by focusing in on the emotional intensity of the overstressed facial expressions of the extremely overplayed characters. Transitions were handled with humor, providing viewers with a comical glimpse into the office and dealings of the dimwitted Principal Vernon (Nicholson). While most movie types are known for their clichés, the clichés within this film were so amplified that one could not help but laugh at their aggrandizement.

All this in mind, what would a ’80s Teen/Horror film be without an underlying message or lesson to be learned? As with The Breakfast Club, the theme for this movie rested on not judging books by their covers (or cliques) and giving people a chance you would otherwise have nothing to do with, because ultimately everyone has their own background, their own story, but it is through such differences that last relationships could potentially be formed.

Because Getting Schooled effectively played on viewers’ nostalgia of better days in movie-making, and embellished treasured elements to levels reaching an overwhelming, but enjoyable absurdity, CrypticRock gives Getting Schooled 3.5 out of 5 stars. 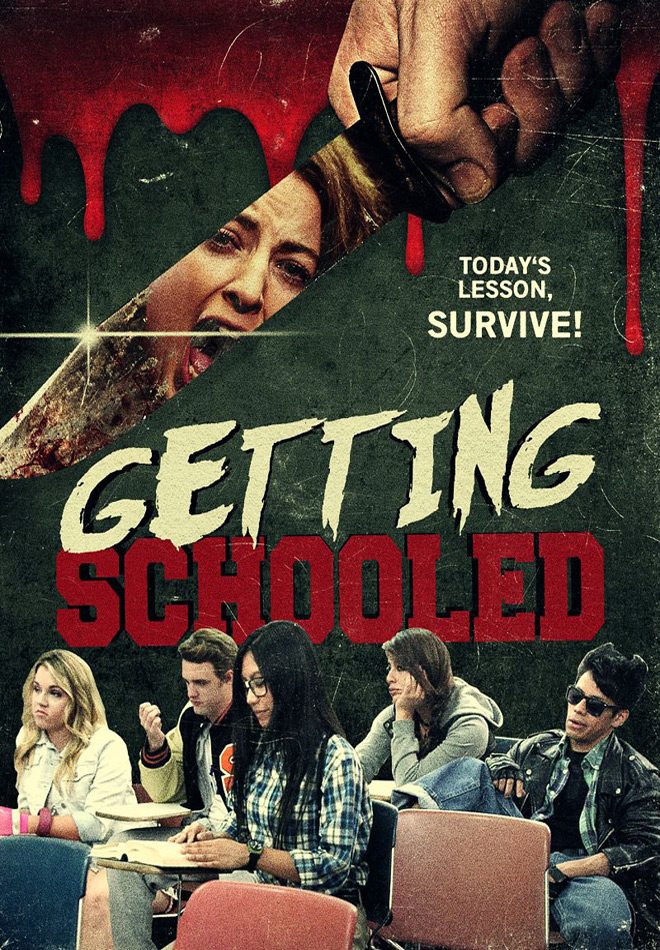