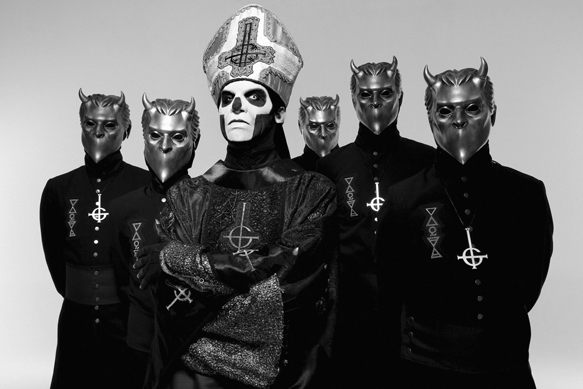 The clergy has appointed a new Pope. The Nameless Ghouls of Sweden’s Heavy Metal outfit Ghost, along with Papa Emeritus III, have crafted a new psalm of evil that is sure to have an avid fan beating down the doors of their local record shop for their third offering, entitled Meliora. Meliora, Latin for “Better,” is a no doubt a fitting title for the record which could be their best to date.

Founded in 2008, Ghost hail from Linkoping Sweden, have become a cult phenomenon across the globe and have captured the hearts of legions of devout fans after the buzz created from their first spectacular American appearance at the annual Maryland Deathfest in 2011. Having toured with Paradise Lost, Mastodon, Opeth and countless other has only solidified the movement they have created. Known for their heavy, doomish, yet melodic and almost indie rock feel, their music is only matched by their stage presence and mystery that enshrouds the band members, who to this day are yet to be identified despite rumors.

From the first track “Spirit” with its eerie Doctor Who style intro to the haunting layered vocals of Papa Emeritus III and Latin speaking choir along with the tick-tock of a monstrance clock on closing track “Deus in Absentia,” this album is the most versatile and matured album to date. Meliora also offers a combination of accessibility and heavy that will have Metalheads cheering and their Mom tapping her toes. The shrill of the keyboards add a texture of a Horror cinema vibe that compliments Papa Emeritus III’s operatic voice that could turn this album into a Broadway Musical in vein of all-time classic, The Phantom of the Opera.

The second track, “From the Pinnacle to the Pit” details Lucifer’s fall from grace as Papa Emeritus III muses “You are cast out from the heavens to the ground, blackened feathers falling down, you wear your independence like a crown.” The fall is detailed as a gift of freedom rather than a curse, or as the old saying goes, “Better to reign in hell, than serve in heaven.” Released several weeks after “Cirice” it is another prime example of the almost chameleon abilities of the band to switch gears at a moment notice. The last time fans had seen this was from their Dave Grohl produced EP If You Have Ghost from 2013 which featured Ghost’s renditions of Abba, Army of Lovers, Depeche Mode, and Austin Texas Psychedelic Rock pioneer Roky Erickson of the 13th Floor Elevators.

Speaking of “Cirice”, it was released in May as a single, complete with artwork paying homage to 1991 film The Silence of the Lambs with the bands signature “Grucifix” branded on the moth. The music video features a definitive ’70s Dario Argento vibe and even features a children’s talent show with little hellions performing as Ghost to a crowd of horrified parents. When the lyric “I can feel the thunder that breaking in your heart” resonates in the chorus, it is just beautiful. This is without any qualms the most fantastic song on the album and an excellent choice as a single to give listeners a taste of what Meliora would bring to the table.

The sixth track , “Mummy Dust” musically sounds as if Ritchie Blackmore’s Rainbow became heavy and added a choir. Crunchy guitar riffs along with Papa Emeritus III’s almost angered tone, makes this track very reminiscent of their 2010 debut release Opus Eponymous. Then there is the track “Absolution” which showcases very catchy synth and keyboard work as well aggressive yet melodic guitars with catchy hooks and the most elaborate soloing listeners have heard from the Nameless Ghouls thus far. The riffs and flourishes and piano track somehow manage to highlight and complement each individual part as well as come together to form one of the catchiest tracks on the album. Furthermore, the chorus “Put your hands up to the sky, cry for absolution” is sure to become a sing-a-long on the Black to the Future tour this Fall.

Coming two years after the chart topping Infestissumam, Meliora is an absolutely must have for fans and is sure to bring many more followers into the fold. With ten tracks running just over forty minutes there is plenty to be interested with on this album from start to finish. Above all, Ghost’s sound continues to crosses boundaries to a classic Heavy Metal style that appeals to generations of genre lovers and essentially is timeless.  CrypticRock gives Meliora 5 out of 5 stars. 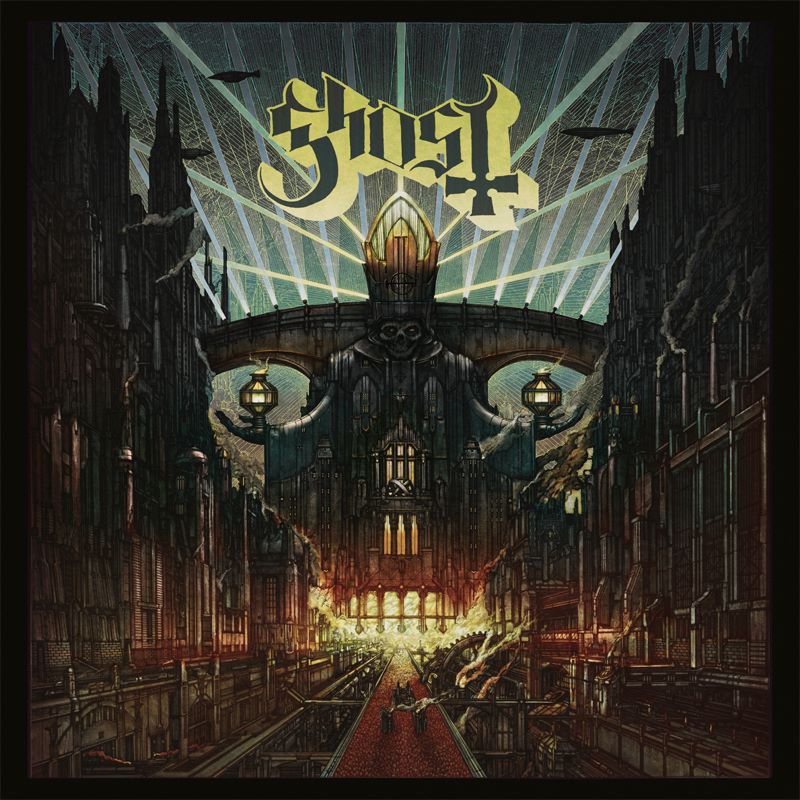 Since August 18th, Ghost has embarked on a small four independent record shop in-store acoustic tour to promote the upcoming release, welcome Papa Emeritus III If you are lucky enough to live close to ZIA Camelback in Phoenix, Sound Garden in Baltimore, or near Rough Trade Brooklyn, the purchase of the album from these record stores will secure a wristband for entrance to the intimate set and meet and greet with the band.

In addition, Ghost will begin their full-length tour Black to the Future next month in the United States and Canada. See details below.