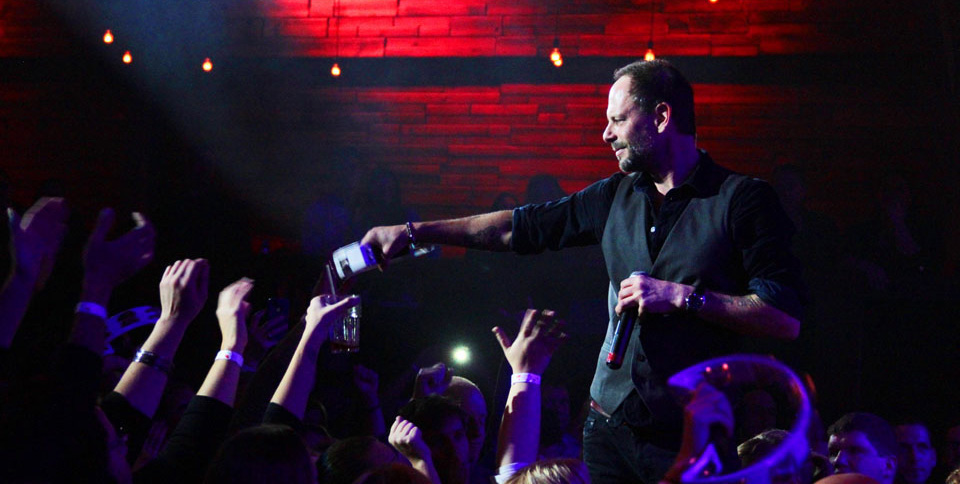 The 1990’s were a memorable decade of rock music. With the birth of grunge rock and the growth of alternative rock there were many bands worth talking about. Amongst those which made their mark on the time was Gin Blossoms. Having a wide range of success with 6 chart topping hits in that time. Remaining relevant over the years Gin Blossoms continue to make records and tour in 2013. Originally from Tempe, AZ, lead vocalist Robin Wilson has relocated himself to Long Island, NY in recent years. Now a Long Islander, the island has had the pleasure of Gin Blossoms playing more than a handful of shows all throughout Nassau and Suffolk County over the years. For many this is exciting to think of a band of such respect now somewhat of a local act. On Sunday November 17th, a decent size crowd gathered at The Emporium in Patchogue, NY to catch Gin Blossoms rock out some feel good music.

Opening up the evening was New York born songwriter Blake Ian. As a recording artist and performer Ian has released 3 full-length albums and 5 singles of his own original work. He has toured the country and opened for Donovan, Kenny Loggins, Eric Burdon and The Animals, Leon Russell, Duncan Sheik, Jeffrey Gaines, Christopher Cross and Gin Blossoms. Ian’s acoustic based music was a nice mood setter for the night.

Next up were Long Island band iRideSense. The band formed back in 1993 and has made a name for themselves on the local scene and abroad over that time. Consisting of Tara Eberle-Drouin (vocals/bass guitar), Rick Eberle (vocals/rhythm guitar), Rob Viccari (lead guitar), Rich Drouin (drums), this is a band of family and friends with Tara and Rick being married and Rich being the brother of Tara. The band came onto the stage to put on a nice set of rock music. Tara and her brother Rob shared vocals on tracks making for a nice series of duets. Their sound would best be described as feel good pop rock. There is enough melody here to grab your attention and many tracks have a nice ambient backing guitar sound.

It was now time for the main act in Gin Blossoms. Emporium filled in nicely by the time they walked onto the stage with fans spread out in the VIP sections and predominantly on the floor up against the stage ready to have a good time. Robin Wilson and company opened things up with newer track “Don’t Change For Me”. The song is off their 2010 album No Chocolate Cake and really began things nicely with its upbeat sound. Next they mixed things up with a series of newer and older tracks back to back in “Lost Horizons”, “Miss Disarray”, “As Long as It Matters”, and “Somewhere Tonight”. Fans sang and danced along in excitement reaching up to Wilson as he played his signature tambourine. Jesse Valenzuela (guitars/backing vocals) spent most of the time toward the rear left of the stage but made his presence known with some stand out guitar solos and powerful backing tracks earlier on. “Scotty” Johnson (guitars/backing vocals) sold stage right and undoubtedly was having a blast projecting a happy feeling onto the audience with his performance and smile.

Six tracks into their set the guys paced themselves treating fans to 1993 hit “Found Out About You”. There was not a person standing still down on the floor and the track still holds a place in fans heart 20 years later. They went on to play a nice section of tracks including “29”, “Learning The Hard Way”, and fan favorite “Allison Road”. Wilson kept his energy level elevated throughout the set vigorously shaking his tambourine and at points even throwing it out to fans only to get a new one to continue his performance. Fans reached up to Wilson only to be surprised with him stepping down to the floor to sing along with fans surrounding him.

The set went on at a steady pace saving the bulk of the hits until the end with “Till I Hear It From You”, “Hey Jealousy”, and “Follow You Down”. The songs sounded just as good as they did all those years ago and if you were a teenager in the 1990’s many were the soundtrack of your life at the time.

Walking off the stage for what appeared to be the end of the evening was merely a break for the band to come back for an encore including the emotional hit track “Until I Fall Away”. The set closed out with NRBQ cover track “I Want You Bad”. Wilson encouraged fans to clap along and it was a fine closing.

Gin Blossoms sound as solid a band as ever. With that they also seem to be genuinely enjoying performing. There is no doubt as long as the boys want to keep performing fans will continue to show up to part take in the musical celebration.