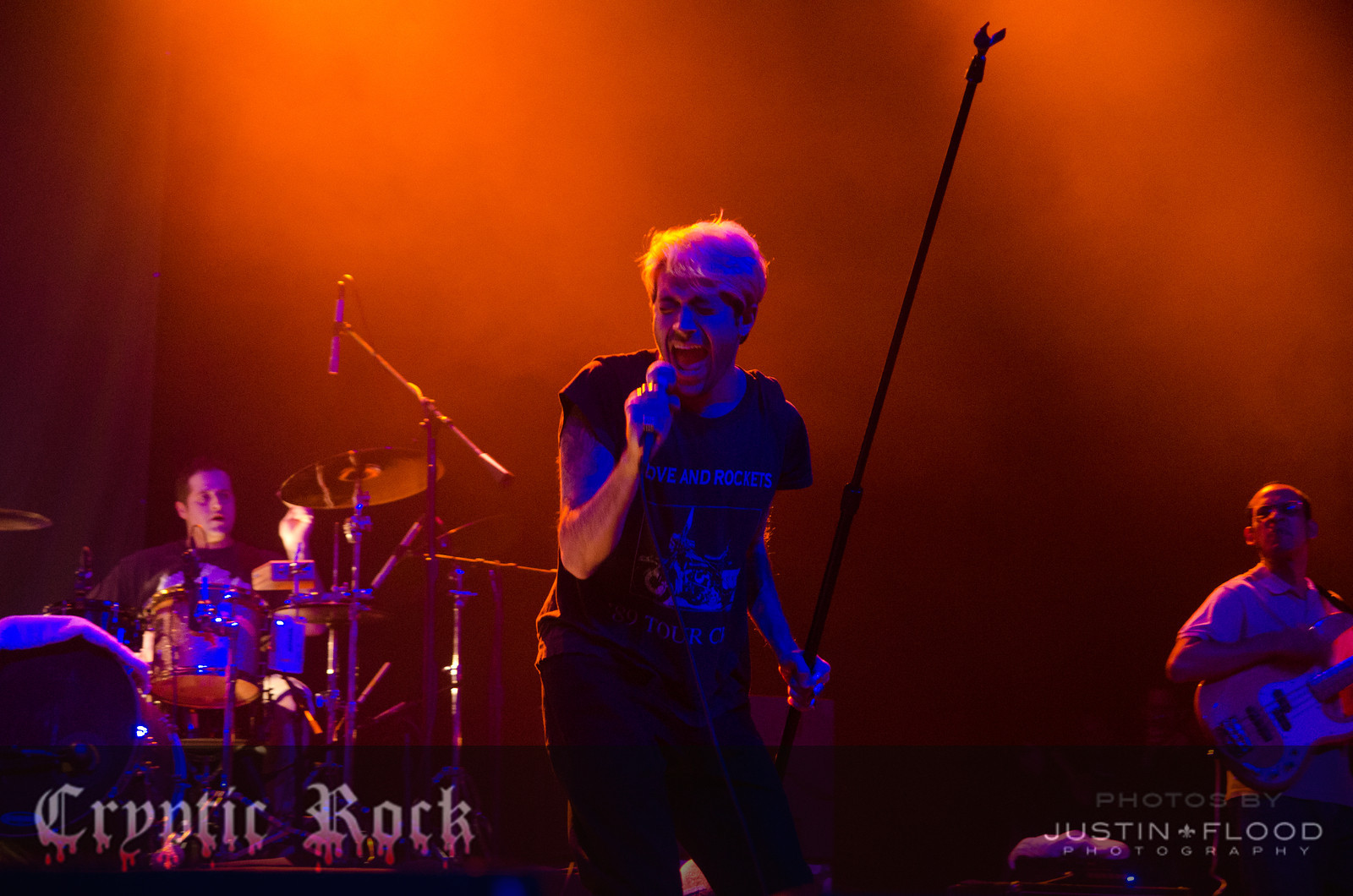 A day after stuffing their face with turkey and other Thanksgiving treats Long Island was given an early Christmas present at The Paramount in Huntington on Friday November 29th. Post-hardcore band Glassjaw made an appearance at The Paramount with These People and Unlocking The Truth. Originally from here on Long Island this would be a very special show home to fans of Glassjaw. With the band being around since 1993 they have built themselves quite a beloved fan base within the confines of where it all started for them. Having not played Long Island in sometime, The Paramount was packed and ready to see the boys rock out.

The night began with Brooklyn, NY youngsters Unlocking The Truth. These kids are in sixth grade and rock harder than others twice their age. Comprised of Malcolm Brickhouse (guitar), Jarad Dawkins (drums) and Alec Atkins (bass) they came onto the stage with confidence, pose, and pure shredding ability. It’s clear where these boys derive influence from and that is classic thrash metal. They stormed through a 30 plus minute set of melodic powerful instrumental heavy metal. The crowd treated the boys warmly with cheers in between each song enjoying every minute of it. What was most impressive is they took no breathers in between tracks and jammed perfectly all the way through. Brickhouse and Atkins showed excellent showmanship moving about the stage headbanging. Dawkins drumming was right on time and hard hitting making you just smile and want to throw your metal horns in the air. Their skills are immense and at such a young age to be playing in front of large audiences like this makes the sky the limit for these 3. CrypticRock urge you to check these kids out not merely for novelty factor but because they rock!

Next up were another up and coming Long Island band called These People. Approximately 25 minutes south of The Paramount in Wantagh, These People consist of TJ Penzone (vocals/guitars), Mike Shoureas (drums), Mark Thomas (bass), Steve Connolly (guitar/vocals), and Ryan griffin (percussion). The band brings a unique atmospheric blend of rock electronic effects. Catchy, melodic, and emotional their sound is something different than what most bands are doing today. There are influences from 80’s post-punk, classic rock, and shoegaze spread evening throughout their style. Penzone vocals echoed throughout The Paramount while the noisy guitar sounds created somewhat of a dream like atmosphere. Playing in front of The Paramount crowd went over well for these guys as they received applauds throughout their set.

The diversity continued with Jamaica, Queens artist Cody B. Ware. Ware is an artist which refuses to define his style or sound. Clearly taking influence from numerous areas including rock, electronic, and rap; Ware provides a rather interesting musical experience. Ware has been quoted as saying “Let it be known from this day forward I am NOT a rapper I am a FREE THINKER. I do NOT make rap music I make FREE THINKING.” Ware stormed onto the stage with his band starting a fire vocally. Smooth and rhythmic, Ware sounded great and you couldn’t help but bop your head. The band provided a tight rock sound behind the frontman with plenty of hard hitting drums and guitar melodies to please the crowd. A stand out moment in the set was when Ware played the track “#33 Forever”. The track is heavy lyrically, musically, and just plain rocks in a live setting. As Ware moved about the stage you could tell this guy is a natural performer and knows exactly what he wants to achieve. Whether Ware considers himself hip hop or not the fact is hip hop needs artists like this to bring it back to its golden age.

After a mixture of musical styling, the crowd was ready for Glassjaw. With well documented issues with their label Roadrunner Records upon the release of Everything You Ever Wanted to Know About Silence (2000), Glassjaw has been adamant about their displeasure over the years. Long removed from their contractual obligations to Roadrunner, Glassjaw continues on a successful road over the years releasing their sophomore album Worship and Tribute (2002). With a series of Ep’s to their credit, Glassjaw have stayed consistent and true to their fans. With the same line-up for over a decade now consisting of Daryl Palumbo (vocals), Justin Beck (guitar, keyboard), Manuel Carrero (bass), and Durijah Lang (drums) these guys play for the love of music.

The band took the stage to an explosion of cheers from the audience, opening up with tracks “Mu Empire” and “Pink Roses”. Palumbo lit up the stage singing with every ounce of raw emotion in his bones. Beck, moving about the stage completely enthralled in the music jamming out on his guitar, while Carrero provided a thick bass backbone. Their set went on to play a series of tracks from their EP’s and two studio albums including “Jesus Glue” and “Stars”. Fans sung along on cue to tracks like “Pretty Lush”, “Tip Your Bartender”, and “Ape Dos Mil”.

Already ranking as an excellent performance and amazing crowd response, things became even more interesting when the band welcomed Billy Rymer from The Dillinger Escape Plan out on stage to play a second drum kit on tracks “Gold”, “Vanilla Poltergeist Snake”, and “Stations of the New Cross”. Lang and Rymer played side by side rocking out at full force to the tracks. The fans cheered, screamed, and even crowd surfed; enjoying each moment of the performance. The 19 song set closed out with two tracks which introduced the masses to Glassjaw in “Siberian Kiss” and “Babe”. Raw, inhibited, and throat pulsing; Palumbo gave the audience everything they were looking for and more. Feeding off each others energy and enthusiasm of the Glassjaw and their fans had a night for the ages.