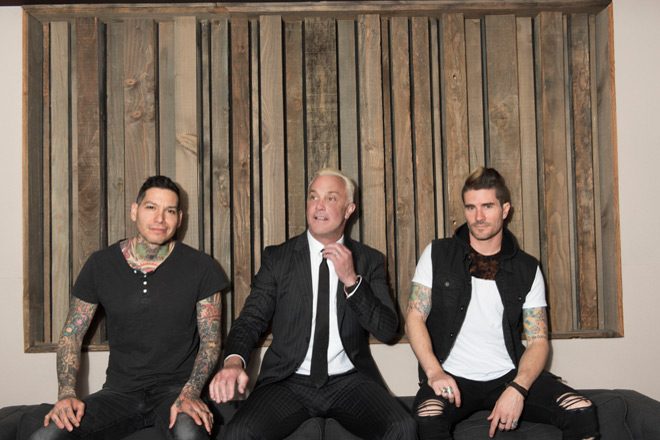 Goldfinger are known for their brand of Punk Rock that fuses Ska elements along with Pop sensibilities and creates a wholly infectious, superbly catchy sound that begs you to listen. It may have been nine years since the group’s last sonic offering, but on July 21st, 2017, John “Feldy” Feldmann returns with The Knife, thanks to Rise Records.

Just recently, on July 17th, at the Alternative Press Music Awards (APMA) Ceremony, Feldmann went home with the very first-ever Influencer Award. Which says leagues about this Punk luminary who got his start with Goldfinger back in 1994 in Los Angeles. Embracing the Ska movement, along with political activism – especially in the field of animal rights – Goldfinger quickly became a seminal favorite throughout the Punk community. Over the course of fourteen years, the band would release six albums – from 1996’s Goldfinger to 2008’s Hello Destiny… – undergo pesky line-up changes, and see Feldmann become an in-demand producer within (and beyond) the Pop Punk genre.

It has been nine long years since Goldfinger’s last sonic offerings and Feldmann is now the last man standing. On The Knife, he recruits a cast of exceptional talents as his backing band: Phil Sneed of Story of the Year on guitar, Mike Herrera of MxPx on bass, and Travis Barker of Blink-182 on drums. Of course, there are also guest appearances, like guest vocals from the likes of Blink-182’s Mark Hoppus and 311’s Nick Hexum; guitar work by the Mighty Mighty Bosstones’ Nate Albert; drumming from Twenty One Pilot’s Josh Dun; and even an appearance from ONE OK ROCK’s Takahiro Moriuchi. It never hurts to have friends in high (charting) places!

The Knife kicks off to the ridiculously upbeat melodies of “A Million Miles” – with catchy Ska elements that run alongside a Warped Tour-worthy sing-along – a reminder of exactly why this band is so very beloved throughout the scene. “Get What I Need” name-checks Bad Brains alongside delicious Ska hooks – complete with a horn section! – as Feldmann sings, “I lost myself just to get what I wanted.”

One of the album’s best offerings, “Am I Deaf,” pays lyrical homage to musical greats of yesteryear like The Who, Black Flag, and Dead Kennedys, while questioning the validity of today’s heartless and thoughtless music; there is also an age element at play here for those that feel a bit old and out-of-touch with the mass-produced new world of digital music. Superbly catchy, this is what it feels like to be a curious old fart in the Punk scene in 2017. Setting aside any age restrictions, the Island flow of “Tijuana Sunrise” celebrates blacking out in Mexico with Jose Cuervo to recover from being a part of a dynamic duo that has just gone back down to solo fun. How very summer!

Goldfinger turn a lover’s quarrel into delicious humor with “Put The Knife Away,” because no one wants to have a fight with their lover that involves sharp objects pointed at them! It is Feldmann in his finest hour and a true stand-out of this collection. It moves flawlessly into the classic sound of “Don’t Let Me Go,” which can be viewed as a simple relationship track or, in light of recent tragedies, an anti-suicide plea. The bottom line is that the pain – be it from life or love – is only temporary, hold on. Better yet, find a “Beacon,” a light that brings you home and keeps you humble in your dreams.

“Who’s Laughing Now?” turns toward a slightly darker sound but remains fully catchy and brings back the horns, segueing into the immensely full sound of “Say It Out Loud.” It all drives us toward the display of Feldmann’s offbeat sense of humor, “Orthodontist Girl.” (Now do we have to wonder if root canals are his kink?) “See You Around” is the perfect wrap-up to summer, a remembrance of the good times while moving ahead to the future. 311’s Hexum provides guest vocals on “Liftoff,” a fun countdown that will have fans embracing the song’s sing-along nature. It is sweet as pie, as is the album’s closing number “Milla,” an ode to the girl that makes everything right in the world for her daddy.

The Knife may be nine years in-the-making but it is deliciously infectious, fully immense sound was worth that wait. Ripe for sing-alongs in the July sunshine, perfectly crafted for the old-school Punk or the new-school MP3 collector, Feldmann’s collection of sharp objects is perfect for running, jumping, hopping, and Ska-ing through summer with a smile. For these reasons, CrypticRock gives Goldfinger’s The Knife a 4 out of 5 stars. 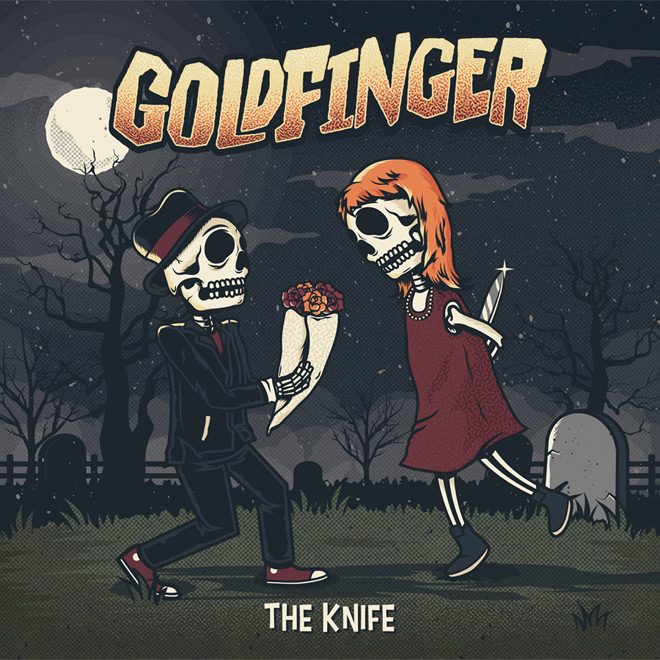