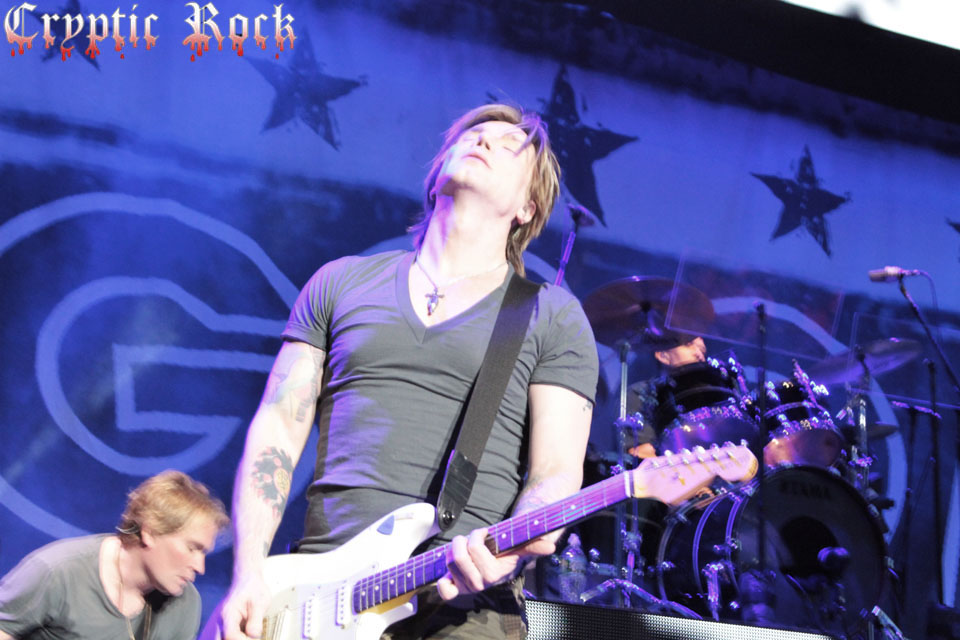 Alternative pop rock band Goo Goo Dolls came to Nikon at Jones Beach Theater in Wantagh NY Saturday August 17th.  It was a clear and cool evening at the beach where a sold out crowd gathered to see Goo Goo Dolls and Matchbox Twenty join forces for what would be an amazing show.  Opening up the evening was singer-songerwriter Kate Earl.  Earl started the evening off right with a smooth bluesy style performance.  It’s evident she is heavily influenced by classic rock female vocalists like Stevie Nicks, Linda Ronstadt, and Joni Mitchell.  With a strong singing voice Earl’s performance welcomed arriving fans nicely.  Goo Goo Dolls hit the stage as the sun set over the bay and the amphitheater was packed to full capacity.  With a classy stage setup highlighted by a 20 foot high platform for drummer Mike Malinin. John Rzeznik started their set off right with the lead single “Rebel Beat” off their latest album Magnetic.  The upbeat feel good track got the crowds attention with the positive vibe .  To the surprise of many the Goo’s immediately interjected one of their heavier tracks “Naked” all the way back from 1995.  Leading right into a series of the band’s classic hits including “Slide”, “Black Balloon”, and much more.  With each song the fans sang and danced along with joy.  One would seemingly forget the massive amount of hits this three piece band has had over the past two decades until you heard the catalogue performed live.  As always original bandmate Robby Takac sang a series of tracks mixed into the set.   His energy is clearly there and he undoubtedly wants to rock.  The set rounded out nicely with a great mix of new tracks off Magnetic.  The album clearly is one of the band’s best in a a few years and pleasing to hear performed live.  Rzeznik remains humble in his success and one of his most charming qualities is his ability to be relatable and human with the audience.  With songs like “Better Days” you could not help but feel the magic in the air and know this track touches home for Rzeznik, as it does the listeners.  Songs like “Name” and “Iris” still hold that flare during live performances after all these years and means a great deal to fans.  Overall it was a perfect August evening for a classic Goo Goo Dolls show at Jones Beach.  The guys put on a great performance and surely matched the quality and energy of the shows headliners Matchbox Twenty.