It is always hard getting started for a band, but for Good Tiger, the support and dedication was already there. Only coming together last year, founders and Guitarists Derya “Dez” Ardiles and Joaquin “Jo” Ardiles gathered some of their closest friends – Elliot Coleman (vocals), Alex Rüdinger (drums), and Morgan Sinclair (bass) – for a fresh new project. Already well established musicians working with other talents such as Tesseract, Architects UK, The Safety Fire, The Faceless, and Conquering Dystopia, the band is completely experienced and capable of jumping right back into the studio.

Not starting from scratch is always helpful, but the fact that the fans were just as excited as they were, gave Good Tiger the boost they needed. After forming the band, the group decided they wanted to completely record their album on their own; taking a risk by raising money online, over 45 thousand dollars was donated to Good Tiger. With the new-found support of their fans, the ensemble was able to record their first full-length album together, in various parts of the world. After a couple of months, the band had reached success and came out with their debut record, A Head Full Of Moonlight, released to the public on November 6th of 2015.

Kicking off the album with their debut single, “Where are the Birds,” a familiar piece to those who have heard of Good Tiger before, and new to those who have not, this track is sure to get anyone hooked. Alongside the release of a music video as well, the group is gathering fans with their powerful music and dedication. Continuing on with “Snake Oil,” a piece that expands Good Tiger’s talents even further, the track features a fast pace tempo, raspy screams, and catchy guitar riffs, as well as a stunning solo.

Indulging listeners even more, A Head Full Of Moonlight shuffles on with “Enjoy the Rain,” which is slightly heavier than the track before, but gives further insight to Coleman’s vocal range. This is a song that is rich in complexity and raises the bar for the rest of the album. Going in a different direction, “I Paint What I See” shows a calm and brighter side of Good Tiger. This track is fun and easy to listen to, while being completely memorable; listeners will definitely be hooked after this piece.

Keeping to their upbeat and exciting vibes, “Aspirations” is another track that will intrigue listeners. The song is catchy and good enough for many repeated listens with its harmonizing vocals, simplistically complex instrumentation, and raw emotion. Taking a different turn, “Latchkey Kids” is a slow and melodic piece; being the antithesis to many tracks off of A Head Full Of Moonlight. With light orchestration and poignant lyrics, listeners are able to see a different side of Good Tiger, while enjoying a change in tone and mood.

Picking the pace back up again, “All Her Own Teeth” proves to be a rousing showcase of Good Tiger’s music abilities. From start to finish, this track will grasp attention and draw wandering ears to the rest of the album. Slowing it down once again, “Understanding Silence” is a piece that is filled with woe and melancholy right from the start. Highlighting a slow, monotonous guitar part to backup the harmonized vocals, this track throws a curveball to Good Tiger’s usual upbeat, positive energy. Ending the album on quite a heavy note, “ ‘67 Pontiac Firebird” is louder and more textured than most. This track features heavy instrumentation and vocals, a perfect way to make listeners want to replay the whole album.

Good Tiger’s songs are transformed by raw talent and emotion that will be sure to impress any listener. Jam-packed with nine energy filled songs, Good Tiger is a hot new band that Rock fans will not want to miss. CrypticRock gives Good Tiger’s A Head Full Of Moonlight 4 out of 5 stars. 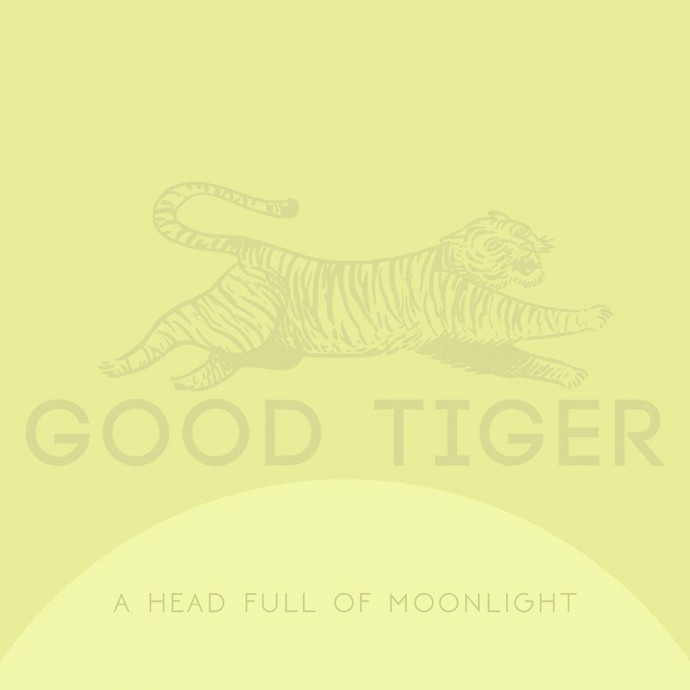