For nearly thirty years, Canada’s Gorguts has been known as a notorious Technical Death Metal band. Through the death of Drummer Steve MacDonald and Guitarist/Vocalist Steeve Hurdle, the split of the band itself, and lineup changes, founding Vocalist/Guitarist Luc Lemay has survived through it all. Through the hardships what has made Gorguts unique through the years is that they continue to progress in different techniques and musical methods where no album is the same style, including the acclaimed 1998 release, Obscura. Reformed since 2008, the latest members to join Lemay includes Kevin Hufnagel on guitar, Colin Marston on bass, and newest member Patrice Hamelin on drums, who joined in 2014.

Returning from the hiatus, Gorguts unleashed a new and refined Avant-Garde anthem in 2013 with Colored Sands, an album over a decade after 2001’s Wisdom to Hate. This fresh Avant-Garde Death Metal approach continues in 2016 as they released the new EP, Pleiades’ Dust, on May 13th via Season of Mist. Lemay and the rest of the band have grown to be fearless in trying new musical approaches and they dared to do something different with Pleiades’ Dust, making the thirty plus minute play one long track. Something few bands have done in the past, fans are now compelled to see how Gorguts conquer the difficult task.

Lemay himself once described Pleiades’ Dust as a “new sonic painting.” The EP is based on Baghdad’s Bayt al-Hikma, which means, the House of Wisdom. Considered to be a tribute to the scientific heritage of the Islamic Golden Age, this House of Wisdom was a library that held sophisticated discoveries during the Medieval times with important findings all across Europe and enhanced the Renaissance era. A library that spanned between the 8th century and up until the Siege of Baghdad in 1258 that ended in obliteration. The lyrics express this story through a thirty-three-minute opus expanding one’s mind of curiosity and how “man” could destroy such wonderful discoveries and achievements. Pleiades’ Dust combines classical arrangements with multi-layered complexities which adds a visualization to the unfortunate destruction.

The lengthy singular track, Pleiades’ Dust sinisterly creeps in with a muffled atmospheric introduction. This ambiance slowly continues as it progressively builds with heavier instrumentals and distorted guitar riffs. This Avant-Garde Mastery continues to chime in with Horror ambiances for the first few minutes until a whispering scream is heard. While the drums escalate in conjunction with the bass, the venomous vocals continue to amplify. The melody changes during the four-minute mark as a sinking guitar riff is heard and the vocals continue to intensify. This combination blends to a softer melody where the instrumentals build a Satanic background sound. The distinctive tempo consistently moves together until the vocals creep in once again.

Another musical shift occurs during the nine-minute mark where instrumentally everything slows down once again, sounding as though it is completely silent. Distortion continues to linger as the bass picks up to keep a creative break before releasing the next chapter of the track. An interesting use of guitar riff is heard around here where it begins with an extended dose of suspenseful intensity just before a Progressive and softer tone launches. After a smooth and steady pace, the listener will continue to be engaged and mesmerized as the track grows heavier from the rhythm on the drums as it rapidly picks up. Fluctuating between aggression and serenity as though musically emphasizing the joy between the genius of man-made creation to the frustration of man-made destruction.

Hitting the eighteen-minute mark after nearly nine minutes of agonizing captivation, the music enters a cool down phase with a singular electronic distorted hook. Ringing in a haunting vibe, it continues to electrify and haunt the listener with the use of its ominous hum for nearly two minutes. Leading into the next direction of the track, no vocals are present during the twenty-one-minute mark with a unique guitar riff as the volume continues to escalate. The instrumentals captivate a darkened sound similar to the initial opening, however, extended. Vocals enter once again during twenty-two minutes in as it screams with blackened emotion.

An innovative guitar riff, almost Classical-esque, crawls in with the bass as the song continues to create chaotic turns to an oblivion setting. Brutal vocals grow, bringing no mercy to the listener as it delightfully continues to torture. As the song comes to a near close, new and inventive surprises carry on with different ambient approaches. Towards the twenty-nine minute point, another downward spiral, chaotic breakdown hits as the drums eerily slow. A faint sound sneaks its way in as the drums return in a chanting aggressive form. At this point, everything musically appears to have an Avant-Garde noise and effects up until the very end.

Leading towards the ultimate conclusion at thirty-three minutes in, it carries a horrific atmospheric tone. Screaming about death, nothingness, and destruction as complete silence enters, ending the track with the feeling of nothingness, hopelessness, and regret.

Pleiades’ Dust is a song that continues a musical transcending journey which was shown in Colored Sands. It moves in with a more refined blend of Death Metal mixed with Classical music composition. Adding the band’s unique and innovative direction, it expresses history and adds multi-layered complexities that meticulously stylize sound with said haunting tales. These different layers of instrumentation capture the initial musical vibrancy where it almost feels as though the listener is hearing it live. CrypticRock gives Gorguts’ Pleiades’ Dust a 4.5 out of 5 stars. 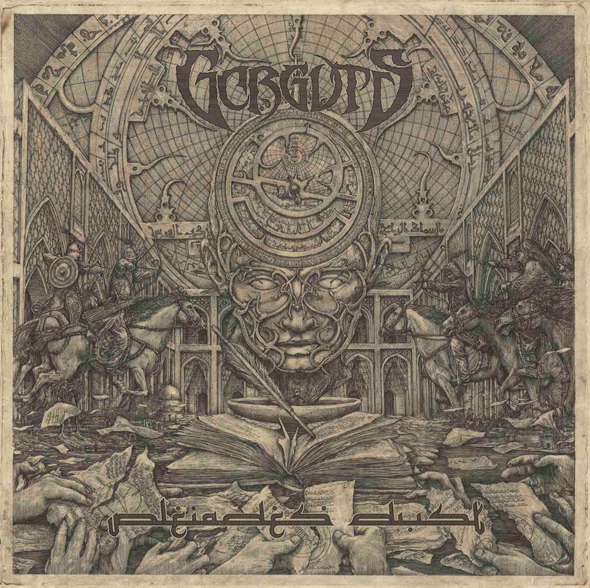