Set for release in select theaters and On Demand/Digital HD Friday, July 21, 2017, via Momentum Pictures, Matt Ratt Production’s The Gracefield Incident focuses on Mathieu Ratthe in his first acting role along with French-Canadian actress Juliette Gosselin (19-2 2016, Darwin 2016) as their characters recover from tragedy as they face a force from beyond the Earth. Also directed by Ratthe, as his debut feature, it is the latest in the always-growing Found Footage subgenre, mixing non-conventional filmmaking with familiar story beats.

The Gracefield Incident gets off to a strong start, immediately establishing both its visual style and the dramatic punch that informs the entire rest of the film. It is a punch that is well packed, fortunately, marrying characters that are quickly likeable with gruesome imagery that simultaneously delivers the intended effect and draws the audience into the film’s world. There is a case to be made that tragedy is best left worked up to, but The Gracefield Incident is a prime example of using it to start strong – the tragedy is what propels these characters, and thus it is only fitting that it is highlighted at viewers’ first exposure to them.

It is also a handy way for the filmmakers to introduce their Found-Footage shooting style, largely relying on a specific conceit that shall go unruined. The style bounces around a few different conceits rather than sticking to a particular format, but all and all is the same mixed bag that found footage usually is. It sticks to the principles of that sub-genre and mostly does not add much that is interesting or new, leading to the feeling that such a shooting style is little more than a gimmick here.

However, there are a few places where using found footage does actually significantly add to the story, and those certainly deserve praise. The intimate filmmaking style helps to establish the characters as a legitimately close-knit group of friends more effectively than conventional cinematography. It makes things more personal when the film is trying to sell the characters to you, and thus makes that an easier sell overall, something that is particularly noticeable in the first 25-minutes of The Gracefield Incident.

Unfortunately, that is window dressing on a lot of plot dynamics that are noticeably old-hat. After a shocking beginning, the film falls into the tired old frame of a group of young friends with personal demons heading to a cabin in the woods, complete with a bubbling undercurrent of sexual energy. Trying to find new ways to shoot this set-up is certainly welcome, but at the end of the day there is a rhythm that the film falls into that is too reminiscent of too many Horror films, and it ultimately makes it seem like The Gracefield Incident is trying to carve out a unique identity in a canvas that is just too familiar. This is exacerbated by some of the dialogue, which can occasionally be hilariously on the nose – when a character peers out to the woods and yelps, “Whoa, did you see that?!,” you may have some issues with originality.

Additionally, the Found Footage shooting style falls victim to many of the same disadvantages of all Found Footage films – sometimes the action can be hard to follow, and the resulting shaky-cam can be very displeasing. Yes, it emphasizes the confusion and terror of the moment, but it is a benefit that very often simply does not outweigh the cost of a film that ultimately makes an audience nauseous.

Partly, this is what can make The Gracefield Incident so confusing – it shows intermittent flashes of creativity, but is also bogged down by endless problems that plague similar films. These flashes of creativity can make things very much worth the price of admission though; there is a fun Sci-Fi twist telegraphed early that should keep audience firmly in their seats, and the structure does shy away from what you would expect at certain points. Rather than continually escalate tension, the film takes a more measured approach, and is all the better for it – once the horror strikes, it wisely opts to stay away from going full throttle.

Furthermore, the quality of the special effects is inconsistent throughout; there are some good practical work, but whenever they have to resort to CGI, there is a noticeable reduction in quality. This is most prevalent towards the end of the film, with one particular protracted sequence that is daring and fresh in concept…but unfortunately kneecapped by some unconvincing digital work. The Found Footage conceit does generally help smooth over some of these problems though, as it acts as an in-universe excuse to not focus too long on the things that need CGI in the first place.

At the end of the day, The Gracefield Incident is a film that is effective and clever in bits and pieces, but has trouble tying it all together in a way that emphasizes much in the way of unique identity. For this, CrypticRock gives it 3 out of 5 stars. 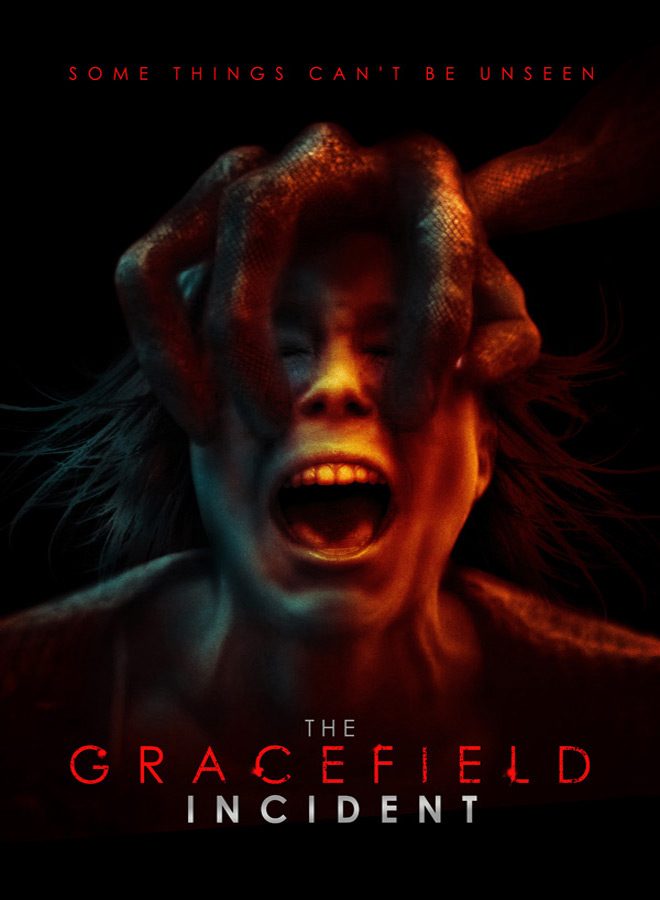