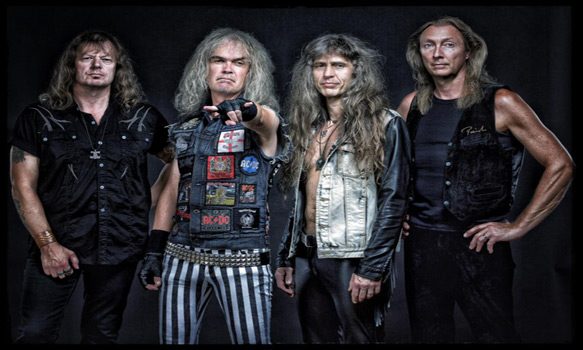 Germany has spawned quite a few amazingly talented bands out of its depths in many genres, but German Heavy Metal has mainly been dominated by frontrunners such as Accept, Warlock, Scorpions, and Grave Digger. More specifically, begun back in the early ’80s, Grave Digger has become king of the German Speed and Power Metal scene, although, they have always had that classic bold sound in their lyrics and vocal style. Celebrating a lengthy career, Grave Digger is back with their latest album, Healed By Metal. Released on January 13, 2017 via Napalm Records, their eighteenth album could not have come at a better time with a better name. In 2017, the human race desperately needs to be healed by Metal, it may be the only known cure for all the atrocities the world is faced with.

The dedication of Grave Digger over the span of three plus decades is enough to prove them worthy in any mention, and the ten tracks of Healed By Metal commands the future with no holding back. Gaining and losing quite a few members over the years, the current lineup is as strong as ever with the original Vocalist/Bassist Chris Boltendahl aboard for the long haul. The rest of the team consists of Axel Ritt on guitar, Jens Becker on bass guitar, Stefan Arnold on drums, and the newest recruit who came on in 2014, Marcus Kniep on keyboards.

With most songs averaging between three and four minutes, it really serves up the Speed Metal antics well while the bold raspy Lemmy-esque lyrics tell the tale to the last detail. Appropriately so, the title-track is number one and expresses the notion of getting straight to the task at hand, showing their is no time to waste. It is very anthem-based and pushes some technically masterful guitar solos and tricks into the listener’s face. On a market standpoint, it may be a bestseller as it speaks the whole truth and nothing but the truth.

Next up is nothing short of more speedy riffage and Metal chaos of the best variety on the song “When Night Falls.” Those who think Grave Digger could not pick up the pace anymore, they do with “Lawbreaker” which may be an ode to Rob Halford with its motorcycle effects and heavy doses of law-breaking guitar. Then they quickly jump over to a speedy, jam-packed marathon called “Call For War,” which picks up with a catchy chorus showing the power side of Metal within the vocals. The common theme here seems to be in the suggestion or, more accurately, the demand of revolution and the prospering of individual growth.

Once again displaying impeccable timing, comes perhaps the biggest hit on the album, “Ten Commandments Of Metal.” Quite impressive, it blows Heavy Metal smoke up the asses of all opposed with the message to stay true to the course, follow the rules, and obey the ten commandments of Metal. Keeping the album’s flow flawless, “The Hangman’s Eye” takes off running with maddening riffs and drumming with a purpose. Again, with vocals reminiscent in style and structure of Lemmy Kilmister of Motörhead, “Kill Ritual” comes on super-strong and dominates in yet another mastering guitar solo showcase.

Rounding out the album with its longest track is “Laughing With The Dead” with the idea that no matter what life tosses out, if there is no laughter in the face of death, then there is no real life to lose. Trapped in the underworld with no one to face but oneself, the only option is to seek out and enjoy the best the current moment has to offer. Featuring laughs amidst the lyrics, the song travels through an epic journey of grand Heavy Metal proportions and comes out a champion.

As all good times must come to an end, the good news is that multiple listens of Healed By Metal does not seem get old. When bands like Grave Digger can keep moving forward with powerful momentum, while maintaining the same classical traits of their origin, they prove they are capable of completing the full circle and cycle that brought about the meaning of Heavy Metal. As always, their album cover is a work of art, as it should be, depicting a grim reaper type character casting a spell perhaps to raise the dead by zapping them with a shocking dose of Heavy Metal. All beginning back in 1984 with Heavy Metal Breakdown, 2017’s Healed By Metal will leave fans cheering for more. Without further Heavy Metal praise, CrypticRock gives this album 4.5 out of 5 stars. 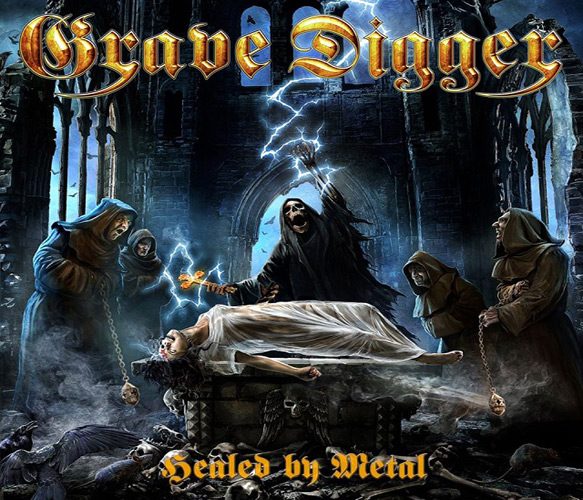