With the success of 1984’s little monsters feature Gremlins, Amblin Entertainment and Warner Bros waited six years for a sequel and released Gremlins 2: The New Batch on June 25th, 1990. Returning to the Director’s chair was Joe Dante with the promise of creative freedom, affording him to break rules, and creating a movie he put the most of his personal influence. The Director of Animation was handed to Chuck Jones (The Looney Tunes 1940s-1950s, How the Grinch Stole Christmas 1966), and the film was produced by a returning Michael Finnell working with a script written by Charles S. Haas (Over the Edge 1979, Martians Go Home 1990). Most importantly, the original film’s key cast members Zach Galligan (Gremlins 1984, Waxwork 1988) as Billy Peltzer, Phoebe Cates (Fast Times at Ridgemont High 1982, Drop Dead Fred 1991) as Kate Beringer, as well as Dick Miller (Gremlins 1984, The Terminator 1984) as Murray Futterman were joined by an impressive new cast with Robert Picardo (The Howling 1981, Total Recall 1990), Christopher Lee (Dracula 1985, The Lord of the Rings trilogy), and John Glover (52 Pick-Up 1986, Scrooged 1988). 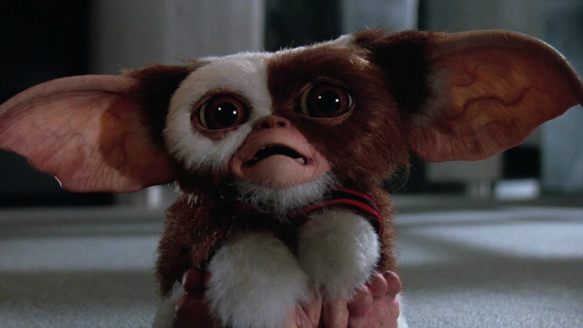 Gremlins 2: The New Batch begins with Forster (Robert Picardo: The Howling 1981, Total Recall 1990), a representative of Clamp Enterprises, buying all the tiny shops in NYC’s Little China to build artificial intelligence-run “smart” buildings. Gizmo’s owner, Mr. Wing (returning Keye Luke) is holding out in one of these buildings and rebukes their offer, but sadly dies shortly after. As he does, Gizmo (voiced again by Howie Mandel: Bobby’s World series, Deal or No Deal series) is left by himself, heartbroken, but has no time to mourn; Clamp is demolishing the shop.

In the business district, Billy (Galligan) and Kate (Cates), now engaged, work for Clamp Enterprises as an advertising artist and a tour guide. They and Clamp, unknowingly, are run by the sinister Dr. Catheter (Lee), who just acquired a new specimen to experiment on from lab tech lackeys Martin and Lewis (Don and Dan Stanton: Teminator 2: Judgement Day 1991, Looney Tunes: Back in Action 2003). In Billy’s department, he hears Gizmo’s theme from a whistling worker. Asking the whistler where he heard it, the guy says the lab. Billy sneaks in to investigate, eventually finding Gizmo and rescues him.

Everybody is on edge as Daniel Clamp (Glover) saunters into Billy’s department, except department suck-up, Marla Bloodstone (Haviland Morris: Sixteen Candles 1984, Who’s That Girl 1987). When the group leaves, Gizmo climbs out using a paper clip rope to explore. Looking for Billy, Gizmo sees a maintenance man working on a malfunctioning water fountain. Gizmo hides under Billy’s drawing table to not get wet, but does anyway. Convulsing, little fuzzballs pop off him, turning into more Mogwai, one being evil Mohawk (returning Frank Welker), who immediately get the others to join in shoving Gizmo into a vent while the less focused wreck work spaces.

Now on the loose, the bad Mogwai make themselves known, foraging after midnight. Having snuck back into the building, Billy and Kate warn security to lock down the building and hunt Mogwai. Gizmo looks for an escape in the vents, falling down a shaft leading to the building’s bowels…and Gremlin nests. With lights flickering, people wander around bewildered. One of those people is the conglomerate television show character Grandpa Fred (Robert Prosky: John Carpenter’s Christine 1983, Mrs. Doubtfire 1993). Billy and Kate get flashlights as weapons against the Gremlins as Mohawk pulls wires on a fuse box to torture Gizmo. 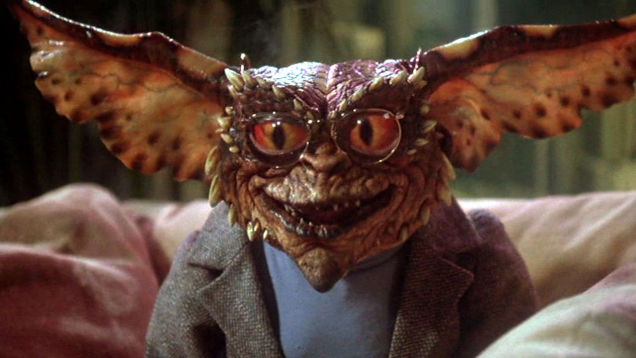 Billy goes to Forster, Clamp’s Chief of Security, to get him to evacuate the building. Dismissing Billy, the rest of the control room mocks him. In another part of the building, Kate continues her tours, taking them to a live taping hosted by Microwave Marge (Kathleen Freeman: The Nutty Professor 1963, The Nutty Professor II: The Klumps 2000) until Gremlins interrupt, attacking the control room, going through the vents into the studio while tourist, Mr. Kasuji (Gedde Wantanabe: Sixteen Candles 1984, UHF 1989) photographs Gremlins putting pots in a microwave, which explodes, setting off sprinklers.

As the tour escapes the coming Gremlins, people in the control watch screens while varmint alarms sound. Then, Mohawk has Gizmo trapped in a copier, screaming about the bright light while Kate is trapped in an elevator hijacked by Gremlins. Clamp’s oblivious to everything in his suite until his secretary stops responding. A Gremlin replaced her as a coffee pot misses his head. The coast clear, he investigates, getting attacked again, but fights the Gremlin, shredding it. Then, Billy and Forster find Clamp, telling him to shut the building down.

In Catheter’s lab, his cronies are goofing off until a Gremlin shows, downing a beaker’s contents. Catheter comes in to see the Gremlins convulse, fall to the floor, then rise, speaking intelligibly with Tony Randall’s voice as what fans know as Brain Gremlin. Another Gremlin drinks another concoction, turning into a bat Gremlin (voiced by Nancy McConnor), escaping out the window after. Brain Gremlin injects it with genetic sunblock serum to reign chaos. The rest of the Gremlins wreck havok throughout the building. Kate, newlyfreed from being trapped in an elevator, sees the chaos, is tormented until she pulls a fire alarm, while the sightseeing Futtermans get attacked by Bat Gremlin; however, Mr. Futterman grabs it, and throws it in cement. Inside, Mohawk ties Gizmo to a toy train track. The halls are bedlam, people try to find escape, including the good doctor, who tries to work out a deal with Billy.

Meanwhile, Gremlins keep sampling concoctions, mutating into different hybrids like Lightning, Phantom of the Opera, and a voluptuous female Gremlin, who takes a liking to Forster when he shows up with Billy and Catheter. While Catheter’s rummaging through his supplies for something to kill the Gremlins, he is killed by Lightning Gremlin. Finally freed from the tracks, Gizmo hears Sylvester Stallone’s voice, inspiring him to reclaim the building while Mr. Clamp is doing damage control against the press when he sees Grandpa on one of his screens reporting on the building’s goings on. Mr. Futterman overhears, and tries to help the police.

Billy catches up to Mr. Clamp in his office to see what he has done when Lightning Gremlin attacks, but Billy traps it in a video phone. He tells Mr. Clamp his plan for killing the Gremlins, but involves killing the building’s lights at sunrise. Looking for supplies, Billy thinks he hears Gizmo, but is knocked out by another. Billy’s been laid out, tied to a dentist’s chair, while a Gremlins threatens to drill him until his old neighbor, Mr. Futterman, saves him. Kate, looking for Billy, finds Marla trapped in a huge web. She gloats at Marla’s misfortune, but Spider Mohawk shows. Rambo Gizmo saves them through the vents with a lit whiteout bottle arrow. Down in the cafe, Gremlins gather, celebrating their victory singing a classic movie medley while Grandpa films from a rafter window. Everything hedges on Clamp dropping the curtain perfectly…then, it rains. Billy comes up with another plan to hose the Gremlins using the water to attract Lightning Gremlin to kill the lot. 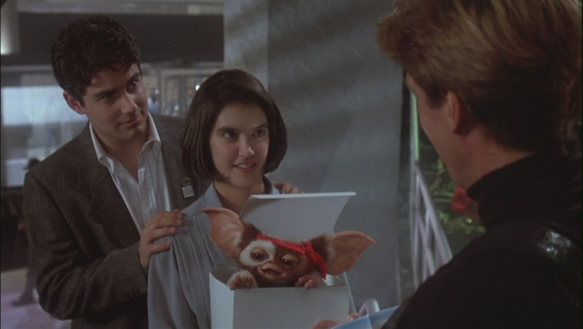 Gremlins 2: The New Batch got mixed reviews during its release, with Rotten Tomatoes giving it a 67% “Fresh” rating. It is popular belief that the film’s commercial success was hindered by its choice to be released the same weekend of Dick Tracy, one of the Summer’s biggest draws. Admittedly more kid-friendly, Gremlins 2: The New Batch gained some critics’ favor over its darker predecessor using wit to satirize Ted Turner and Donald Trump (Glover) as well as television, to genetics, to yogurt. Characterization-wise, the Gremlins were a mix of legendary Rick Baker’s puppetry and Stop Motion, allowing for dancing and a broader emotional spectrum with individual personalities. Gremlins 2: The New Batch was also nominated for several Saturn Awards like Best Director, Best Fantasy Film, Best Music, and Best Special Effects with Glover and Picardo nominated for Best Supporting Actor. Even though Gremlins 2: The New Batch failed to make the boom at the box office its team forecasted, it succeeded in merchandising. From 1990 to today, figurines, plush dolls, and other collectibles have emerged with newer versions.

Like the original, Gremlins 2: The New Batch had a children’s storybook and novelization. American and Spanish versions of a Gremlins 2: The New Batch video game was released for consoles in 1990 while other artists have paid homage or satirized the film, or the franchise in general. While Gremlins are still part of pop culture, the idea of a new film has been floating around for years, and in April of this year, Chris Columbus, the original’s writer, said Gremlins 3 has a writer. Exciting to fans of the original films, he also stated Steven Speilberg is on board to continue the Gremlins legacy to the next generation. While Gremlins 2: The New Batch may have not been the success of the original, it still holds a special place in the heart of of a generation of children, and twenty-five years later, remains to be a fun film to indulge in. 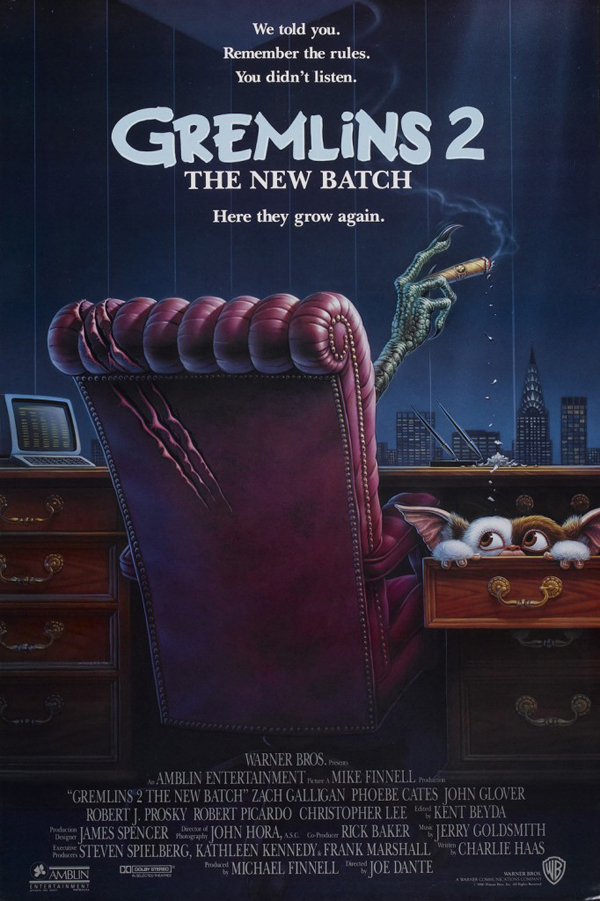 Purchase Gremlins 2: The New Batch on Blu-ray/DVD on Amazon