An ode to 1970s exploitation flicks and a collection of Horror vignettes, Grindhouse Nightmares – which was released in the UK in 2017 – arrives to DVD in the US on Tuesday, February 13, 2018, thanks Cinedigm.

Grindhouse Nightmares is an intriguing little offering, a double-feature of sorts. It stars Linnea Quigley (Silent Night, Deadly Night 1984, The Return of the Living Dead 1985) as a kind of Gothic-nurse character (who looks like a Club Kid on crack) who offers up witty commentary between vignettes and plays hostess for the evening’s festivities. Though, it is important to note that, much like this entire film offering, Ms. Quigley is intentionally done-up in over-the-top ridiculousness! 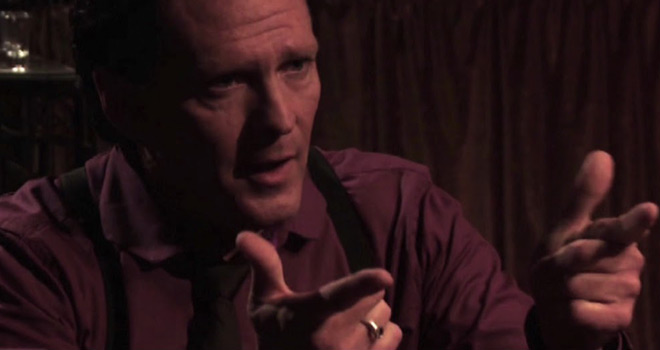 On the menu as the evening’s first course is “Manhunt,” a vignette that stars Steve Munroe (The Comic 1985, Hitler’s Circle of Evil TV documentary 2017) as Sam, a man who wakes up chained to a pipe inside an old mine-shaft. Bloody and bruised, Sam quickly discovers that his cellphone is within his grasp and ringing frantically. On the other line is an ominous stranger (Vass Anderson: Superman 1978, Father Ted 1996) who offers to play a Saw-like game that just might save his life… but at a cringe-inducing price!

As the vignette ends, we cut to ridiculously humorous commercials for things like body hair removal salons (with puppets!), pizza, insurance, and, of course, a PA for stamping out venereal disease. Then come the previews for such exciting films as Quintin Tarroteno’s (the director of “Reservoir Puppies,” of course!) Gangster Musical “Pulp Faction;” the viciously sexy “Nazi Bitches Must Die” starring tons of naked bitches (heil boobies!); “Bulletproof Elvis,” who is taking care of business indeed; that mean sob “AssKicker;” and the family of fun-loving cannibals that are “The Texas Chainsaw Hill Billies.”

The second portion of our double-header, “Stripper With A Shotgun,” kicks off to one truly Metal, instrumental cover of Britney Spears’ “Toxic.” The story that follows is full of strippers dressed as latex nuns, guns, buns, killer muscle cars, and one seriously badass sister with a chainsaw. It stars Britney Spears lookalike Lorna Bliss (The X Factor series 2012, Grindhouse 2wo 2018); Clive Shilson (London’s Burning TV film 1986, Strapless 1989); Danny Lopez (Instructions Not Included 2013, Grindhouse 2wo 2018); and features an appearance from the lovely Brigitte Nielsen (Red Sonja 1985, Beverly Hills Cop II 1987). 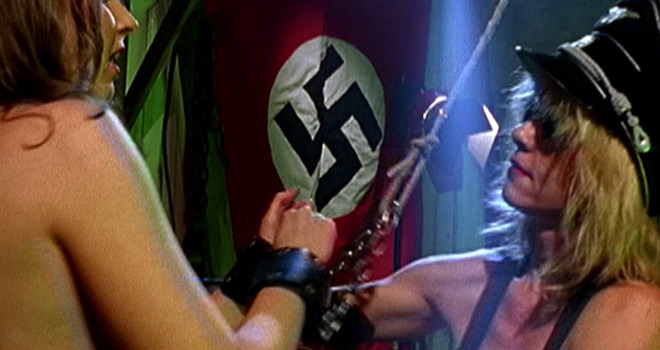 Grindhouse Nightmares is fully intended to be a collection of vignettes done in the style of 1970s exploitation flicks, which were also mirrored in Quentin Tarantino and Robert Rodriguez’s 2007 Grindhouse. What that means is that this film is 100% throwback, complete with intentionally mis-colored and damaged film cells, fake technical difficulties cut-outs, and insanely hilarious, phony commercials. The true meat of the “film” is, therefore, split into its two vignettes – “Manhunt” and “Stripper With A Shotgun.” These features are about as enthralling as they sound, with the latter being merely a launchpad for a healthy handful of breasts and tons o’ guns.

In truth, Grindhouse Nightmares is not intended to be anything more than a deliberately cheesy, grade-C throwback to a time when cinema was politically incorrect and that was damned refreshing. This is a film that does not really give a damn what its viewers have to say post-viewing, provided they have some fun along the way. Though, everything Grindhouse Nightmares lacks in story quality it absolutely makes up for with schtick, which is entirely satisfying only if you are just looking to get your schtick licked. For these reasons, CrypticRock gives Grindhouse Nightmares 2.5 of 5 stars. 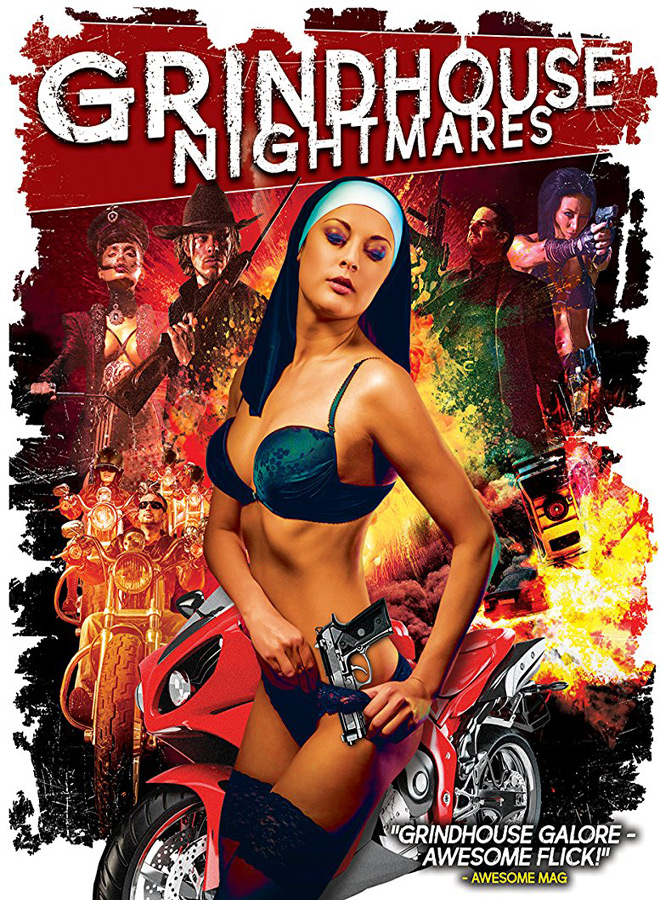