But if you could heal a broken heart, wouldn’t time be out to charm you?

September 17, 1991, in an unprecedented move, Tower Records on the Sunset Strip in Hollywood, California opened her doors at midnight to rabid Guns N’ Roses fans, drunken with ecstasy over the prospect of not one but two new GN’R discs released at the same moment. In their first week of sales, Use Your Illusion I would debut at No. 2 on the Billboard charts, selling 685,000 copies, while its counterpart, Use Your Illusion II totaled first week sales of 770,000 and debuted in the number one slot. The pair would go on to be nominated for a Grammy Award, certified over seven times platinum, and sell in the millions.

Of course, no one knew any of this at the time. In the days after their utterly raw, volatile Rock-n-Roll debut, 1987’s Appetite For Destruction, and their 1988 sophomore Lies EP, Guns N’ Roses were on the cusp of being the world’s most infamous Rock-n-Roll band. The world at large was beginning to know and recognize Vocalist Axl Rose, Lead Guitarist Slash, Rhythm Guitarist Izzy Stradlin, Bassist Duff McKagan, and Drummer Steven Adler. Their names whispered of debauchery and dangerous exploits, and Rose became a somewhat regular on MTV News.

The Illusion twins would come to represent a major turning point in Guns N’ Roses’ sound and career. An aggressive Hard Rock quartet with serious attitude, the band began as a mix of Punk Rock’s balls-out grit and Hair Metal’s showmanship. A top draw on the Sunset Strip throughout their days as an unsigned band, the group’s obnoxious rebelliousness would lead some to coin then the “Most Dangerous Band In the World.” But that was pre-Appetite. Illusion would demonstrate a musical maturity that encompassed their eclectic influences, showcasing elements of Blues, Classical, Heavy Metal, Punk Rock, and straight-up Rock-n-Roll.

The lead-off single would be “Don’t Cry” – the first part of a video trilogy directed by Andy Morahan, based off a Del James’ short story, and starring Rose’s then-girlfriend, Supermodel Stephanie Seymour – a song that featured backing vocals by a little-known musician but GN’R cronie, Blind Melon Vocalist Shannon Hoon. Oddly, the song would appear on both of the CDs, each recording with a different set of lyrics. Perhaps even more strange was the absence of Rhythm Guitarist Izzy Stradlin, and the inclusion – in his stead – of a sign reading: “Where’s Izzy?” That is because shortly into the “Use Your Illusion” World Tour, the band would part ways with Stradlin.

Of course, the visuals mean little without the music, and the Illusion discs had that in spades: from hate-filled homages to Rose’s newest enemies (“Right Next Door To Hell,” “Back Off Bitch,” and “Get In The Ring”) and guest appearances (Alice Cooper on “The Garden”) to cover songs. The inclusion of Paul McCartney and Wings’ “Live and Let Die,” as well as Bob Dylan’s “Knockin’ On Heaven’s Door,” would prove to be a great move: highly popular amongst fans and critics alike.

Quite a few of the songs that made it onto the two discs were actually from the band’s early, pre-Appetite days: “Back Off Bitch,” “Bad Obsession,” “Don’t Cry,” which Rose is reported to have said was the first song the band ever wrote together, “November Rain,” and “The Garden” can all be found on early demos. Additionally, this was the first time that any band-members, aside from Rose, would sing lead on a GN’R studio track: Stradlin would sing lead on “Dust N’ Bones” and “14 Years,” while McKagan takes over lead on “So Fine.” That said, both Stradlin and McKagan would go on to record solo albums.

The band also experimented with longer material: the epic ballad “November Rain” – which would go on to become one of the most famous songs of the band’s career – is nearly nine minutes long. The follow-up single/video, “Estranged,” clocks in at over nine minutes, while the highly-experimental track “Coma” would weigh in at just over 10 minutes in duration. Other lengthy tracks (“Locomotive,” “Civil War”) would play havoc with the then-standard three minute song structure prevalent on radio and MTV.

Of course, one cannot reminisce about the Illusion years without noting the band’s contribution to the blockbuster “Terminator 2: Judgement Day” soundtrack: “You Could Be Mine.” Ah, ’twas when Rose met Ah-nold and all was right in the Hard Rock world.

Twenty-five years does not seem like such a long time when one considers Use Your Illusion I & II. Born at the beginning of the Nineties, to date, the twin discs have sold over 14,000,000 copies combined and are each certified 7× platinum in the United States, with worldwide sales of over 35,000,000. Of course, sales do not mean everything. Some have credited Guns N’ Roses with reviving Rock-n-Roll, both in the ’80s and early ’90s, and most recently in 2016. The group’s current tour, Not In This Lifetime, is moving into its second year and continues to be a top-grossing show across the world. In fact, in their very first year of eligibility in 2012, the band was inducted into the Rock and Roll Hall of Fame in Cleveland, Ohio. Becoming icons and influences is the hallmark of huge success for any band, let alone a group of gutter punks from the dirty streets of Los Angeles. 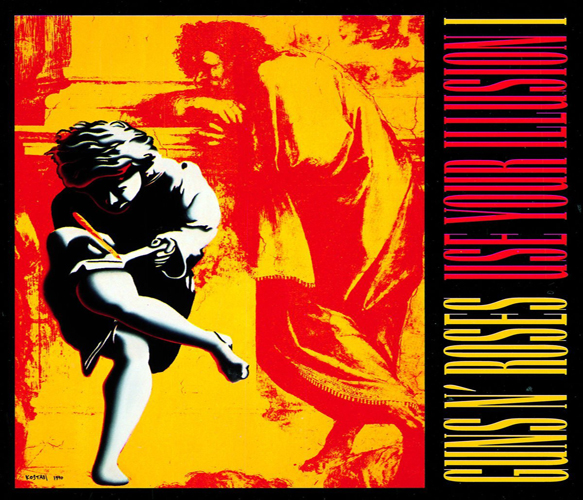 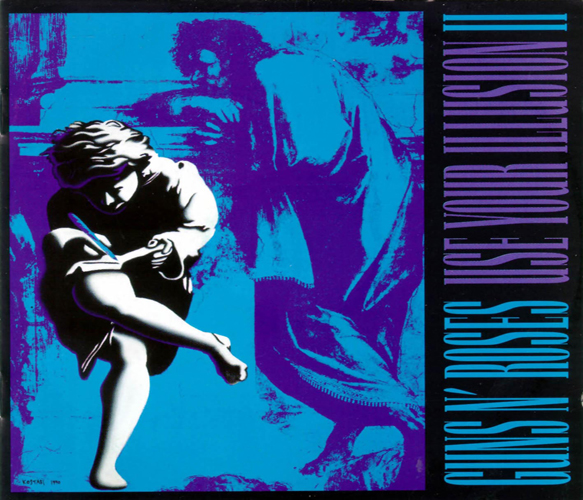