Halestorm Jump Into The Wild Life – A Look Behind The Scenes

December 16, 2015 Halestorm Jump Into The Wild Life – A Look Behind The Scenes 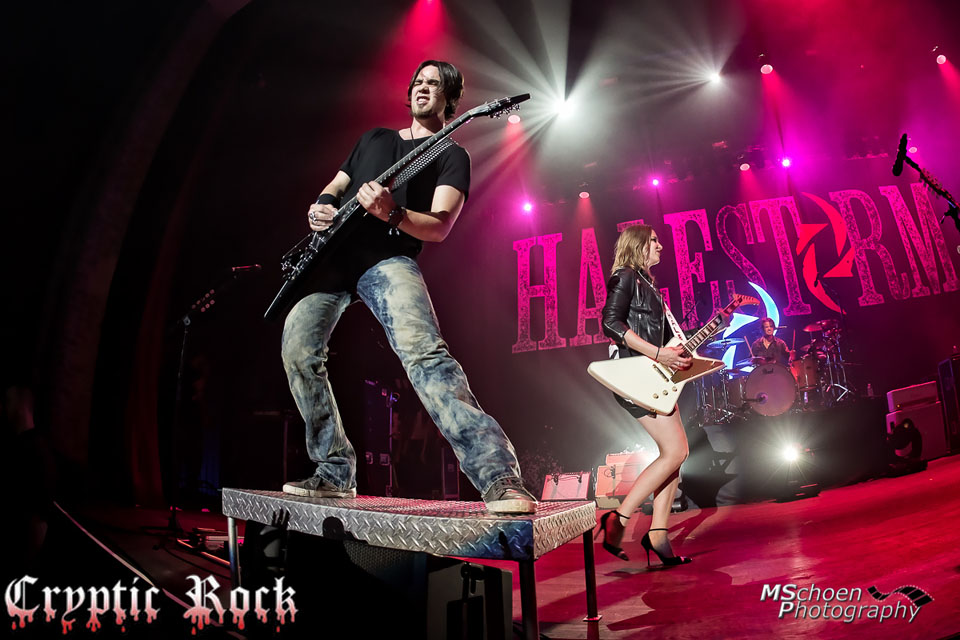 While most adolescents are worried about hanging out with their friends and goofing off, at the ages of nine and fourteen years old, siblings Arejay and Lzzy Hale were already laying the foundation for Rock stardom. Sure, the odds are against most at even a sniff of success in professional music, but dedication, drive, and vision are the key to stacking the deck in one’s favor. With that said, the perception of overnight fame is usually short-sighted by audiences because it may takes years of hard work and sacrifice before the mainstream will even notice an artist in many cases. Arejay and Lzzy’s little project known as Halestorm was no different in this regard as the band spent almost a decade of their lives pounding the pavement until Atlantic Records inked them onto their rost in the early Summer of 2005, granting the band their first major label record deal.

Having already released two EPs independently, (Don’t Mess with the) Time Man in 1999 and Breaking the Silence in 2001, the formidable lineup of Lzzy on lead vocals/rhythm guitar/piano, Arejay on drums, Joe Hottinger on lead guitar, and Josh Smith on bass were prime to make a bold debut when they put out five songs offering One and Done in 2006. Somewhat of an introduction to the mainstream, Halestorm still had plenty of work to do, and in the Spring of 2009 their self-titled full-length album was released. Coupled with supporting gigs opening for big acts like Shinedown, Chevelle, and Staind, the album produced big singles like “I Get Off” and “It’s Not You.” Possessing a heavy Rock sound accompanied by soaring vocals of Lzzy, it would have been easy to pigeonhole Halestorm as just another Hard Rock band. Proving they were much more, in 2012 they pumped out  The Strange Case Of…, a more refined record featuring even bigger hits such as, “Mz. Hyde,” “I Miss the Misery,” the Country Rock vibed “Here’s to Us,” “Freak Like Me,” and of course the “Love Bites (So Do I)” which won them a Grammy Award for Best Hard Rock/Metal Performance on February 10, 2013. 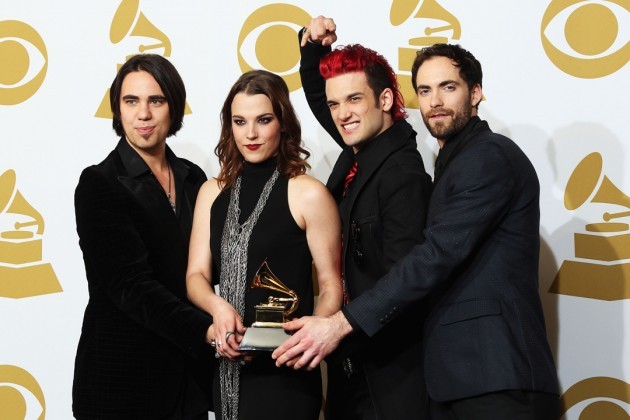 After solidifying themselves with such achievements, one would think Halestorm had found their formula and would be sticking with it as they moved forward. Well, that could never be more wrong as the band broke the mold when it came time to write and record their third record, Into the Wild Life. Dedicated on the idea of challenging themselves to be better musicians and better songwriters, the band entered the recording studio with accomplished Country and Rock producer Jay Joyce to craft a fresh sound for the band. Hottinger said, “It is our third record and we knew we wanted to switch it up with the producer. We wanted to change everything about the way we approached records in the past. The past records are awesome and we are proud of them, but it was time to grow a little bit and challenge ourselves. We had worked with Howard Benson, we knew how he works. We met Jay Joyce and we explained to him what our goal was. Our goal for the record was to bridge the gap between our live show and the recording.”  Bridge the gap they did, and as soon as Into the Wild Life begins with “Scream,” the listener can immediately hear a warmer, less processed texture to the recording. Where their previous albums are heavy and in the listener’s face, Into the Wild Life allows the music time to breath and create it’s own atmosphere.

In addition, Into the Wild Life also could perhaps be the most honest professional recording of Lzzy’s voice to date, with little effects, mostly allowing her own emotion to care the tunes. Hottinger explained, “I personally wanted to hear more on the record of how Lzzy’s voice sounds live. I wanted to hear more of that real Lzzy. I wanted to hear Arejay’s personality on the drums.” That can certainly be felt throughout the album and boldly on tracks such as “I Am the Fire.”  A track that builds an emotion through the sheer passion behind the singing, Lzzy stated, “I remember ‘I Am the Fire.’ There is a moment in the middle of it, it is pretty much all me in vocals, and if I do not get it, we had to do it all over again. I believe it was third take through on ‘I am the Fire,’ I turned to Jay and said, ‘If I don’t hit that note, we can just cut in and do it right?’ They said, ‘No, this is what you wanted, you are in it now girl, if you don’t get that note we then have to do the whole song over again.’ Hard to fathom anyone would put themselves through having to do such a daunting task, with all the modern technology at one’s fingertips, but sometimes the harder road is the best road as Lzzy went on to say, “I am so glad we did it this way because we are proud the record.” 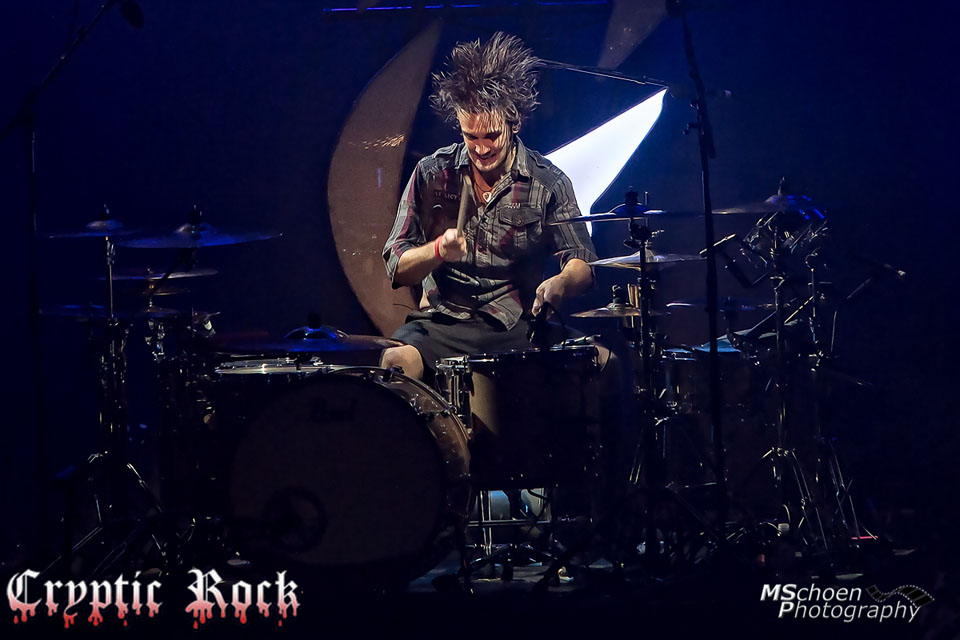 The ear opening dynamics of Halestorm do not stop there though, Into the Wild Life is laced with track after track of more in-depth and insightful music. Songs like “Dear Daughter,” “New Modern Love,” and “Bad Girl’s World” show the chops of mature musicians looking to tap into other topics much closer to the bone than standard Rock lyrics. Thankfully, Joyce saw this new door opening for Halestorm and captured the delicate moments masterfully throughout the record. Hottinger said, “God bless Jay, I think he nailed it with us. He pushes us in all the right ways. It was a challenge and it was fun. We would do a song and cut the click track out in the middle, follow each other ,and let it go where ever it was going to go. It was little tricks like that which made a difference and added to the overall vibe.” True indeed, although, the downside to experimentation is the risk of commercial failure, and many bands have struggled within the past in their attempts. Thankfully, Halestorm stuck to their guns and rolled the dice because Into the Wild Life hit number one in the US and UK as well as being their first record to reach top rankings in various other countries.

With that said, naysayers can now eat their words when they first discounted Into the Wild Life as a step back for the band, or worst, yet a cop-out at becoming more Pop-oriented. Halestorm took a big risk breaking out of their comfort zone, but Hottinger gives much credit to their production team, stating, “It is credit to the engineers and their bravery. With Pro Tools and technology, you can do things so easily and take so many shortcuts. To have the patience to really put the time and effort into something and take the hard, longer road into doing these tracks, but knowing the payoff is better in the end.” Now it is just a waiting game to see what Halestorm will have up their sleeve for the next record. To many, Into the Wild Life merely just scratched the surface of what is building to be the band’s Rock legacy. 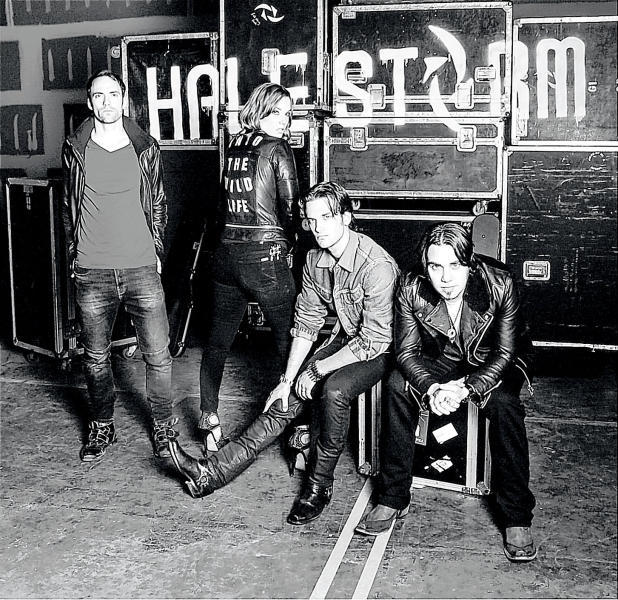