Back in 1978, John Carpenter introduced the world to a new face of Horror with the masked boogeyman Michael Myers in his legendary film Halloween. From there, Michael Myers was killed in a fiery explosion in 1981’s Halloween II. When it was announced that there would be a Halloween III, fans rejoiced… however, it was not exactly what they had their hearts set on. Upon the new chapter in the Halloween series release, fans revolted when they found out there would be no more Michael Myers. The angry mob marched out with their pitchforks and torches shouting, “Where is Michael Myers,” “What’s with the damn robots?!” “We want Michael!” “Although he wasn’t in the preview, I expected Michael Myers to be in the movie!” All this, rather than enjoying a good film for what it was. 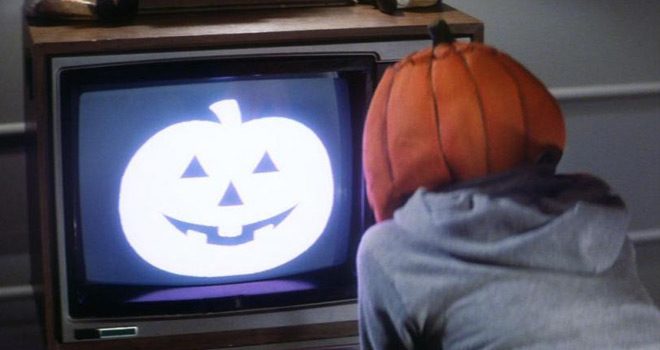 Dubbing the new film Halloween III: Season of the Witch, it was released on October 22nd in 1982, and on an estimated budget of $2,500,000, it reportedly brought in over $6,000,000 in its opening weekend. It was the last Halloween film to have both original creators John Carpenter and Debra Hill involved. Season of the Witch saw the duo act as producers on set with colleague Tommy Lee Wallace taking on directing and writing responsibilities. Featuring a strong cast, it included Tom Atkins (The Fog 1980, Maniac Cop 1988), Stacey Nelkin (Yellowbeard 1983, Bullets Over Broadway 1994), and Dan O’Herlihy (The Last Starfighter 1984, Robocop 1987). Thirty-five years later, Halloween III: Season of the Witch is still the most controversial in the series.

The story begins on October 21st where Harry Grimbridge (Al Berry: The Last Starfighter 1984, Re-Animator 1985) is on the run from some men in suits with abnormal strength. He ends up in the hospital under the care of Dr. Dan Challis (Atkins). While resting comfortably, one of these men comes in and separates Harry’s nasal bone from his skull with just his hands. He walks away, and just as Dan finds him, the Man pours gasoline over himself and sets himself ablaze inside his car.

The next day, Harry’s daughter, Ellie (Nelkin), arrives at the hospital and catches the eye of Dr. Challis as she goes looking for answers for the seemingly insane crime. She traced her father’s last known whereabouts to the sleepy village of Santa Mira, the home of Silver Shamrock Novelties, the maker of the year’s most popular Halloween masks. Dr. Challis, shook by the absurdity of these events and perhaps a little horny, accompanies her to the small hamlet and discovers that the sinister Conal Cochran (O’Herlihy) runs the company as well as the town and is more interested in devious tricks than treats. 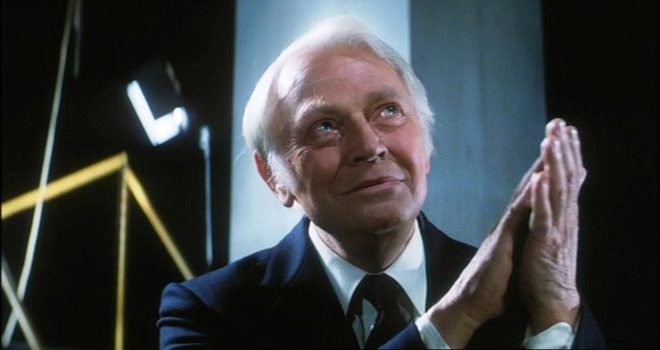 The venerable and infinitely likable Tom Atkins plays Dr. Dan Challis, who on the surface, seems like a decent guy with a few flaws, but when you get right down to it, he is not really that good. At first, when he arrives at his Wife’s (Nancy Keyes (Loomis): Halloween 1978, The Fog 1980) house, he immediately gets called out to the hospital. Ok, normal on-call doctor behavior. However, after Harry Grimbridge gets gruesomely killed, and his killer sets himself ablaze resulting in a fiery car explosion, Dan starts investigating a couple things.

When Ellie shows up and says she won’t rest until she finds out what happened to her father, he takes it upon himself to drive all the way to Santa Mira in the middle of nowhere with her…armed with a six-pack of Miller High-Life. He lies to his ex-wife and totally disregards his repeated promises to spend time with his children. It proves to be a somewhat heroic move as he was able to uncover a nefarious plot to kill millions of people, but in the end, what if that final TV channel did not go off the air and his children were still watching?

Ellie, portrayed wonderfully by Nelkin, was hellbent on finding out what happened to her father, and she was very enchanting as well as sweet… that was until she became an android. This in mind, a lot of fans for years have speculated that she was an android the whole time. However, if that was true, why would Cochran send her out into the world only to bring Dan Challis, a nobody in the grand scheme of things, back to Santa Mira only to stall Cochran’s plans? That would make no sense. No, she was real person then replaced with an android. End of story. 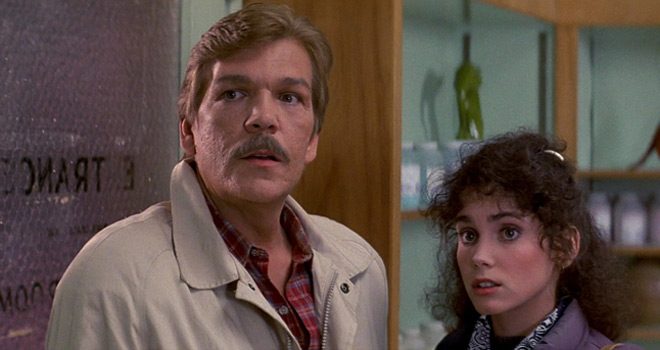 Additionally, O’Herlihy gives the character of Conal Cochran a brilliant charismatic facade. He not only makes masks, but wears one himself: that of a kind big business owner who is kind to children of all ages. How sinister could the guy that created sticky toilet paper, or the dead-dwarf gag be? The only thing that is perplexing is why did he want to sacrifice the children?

Back in Pagan times, the sacrifices were usually for something, like a good harvest or fertility. Perhaps he did it just for the evil of it all, or maybe because the holiday became over commercialized and he wanted to show consumers what Halloween was really all about. Cochran is genuinely terrifying because he is someone that could exist outside of serial killers and monsters and whatnot. He could be your boss or the CEO of your company. In today’s tumultuous world, he could even be the President of a country.

To be perfectly honest, his plot was brilliant: drill a catchy advertisement into the heads of children so that the parents would have to buy the masks just so the kids will maybe stop singing the song. Then, concoct a way to kill them through the TV wearing the instruments of their own demise that their parents had bought for them. It is ancient witchcraft meets modern (1982) technology. It is the equivalent of, say, marketing a video game system in the internet age: the ads would be EVERYWHERE. All the kids would have to have that video game system. Then the manufacturer promises something huge on a certain date and all the owners would have to log on and when they do, their system explodes or sends out a laser from the TV killing everyone. 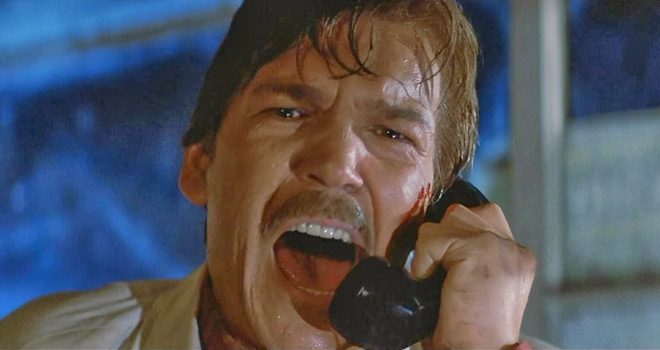 The Witch, Skull, and Pumpkin masks were genius tie-in marketing devices. The Witch and Skull masks, created by Don Post Studios, already existed, but the Pumpkin was created just for the film. Even though they were “advertised” to glow in the dark, only the Witch actually did. In 2012, Trick or Treat Studios recreated the masks to be as movie accurate as possible and they are still for sale today.

All of this begs the question: was it brave or foolhardy to move forward with a sequel that did not have anything to do with the original antagonist? Foolhardy perhaps, but as far as John Carpenter and Debra Hill were concerned, Michael Myers was done after the original Halloween. Their intention was to do a different film every year around the Halloween holiday. However, Halloween had made so much money, that the studio paid Carpenter and Hill a lot of money to make a second film with Michael Myers. After Michael died at the end of Halloween II, that was most definitely the end of him, and it was time to move on to fresh material.

Justifying the thought behind the Halloween series concept, Stacey Nelkin told CrypticRock in a 2015 interview, “The reason so many people got upset was because they wanted Mike Meyers, right? They wanted that same thing. Tommy Lee Wallace, the director of Halloween III, who was very involved with John Carpenter, told us originally with Halloween III, the idea was that, every year, they were going to make a new, different Halloween film. It was going to be a really interesting kind of thing, so the fans would have had something new each year. Then somebody chickened out and they went back to the basics, back to I and II.” 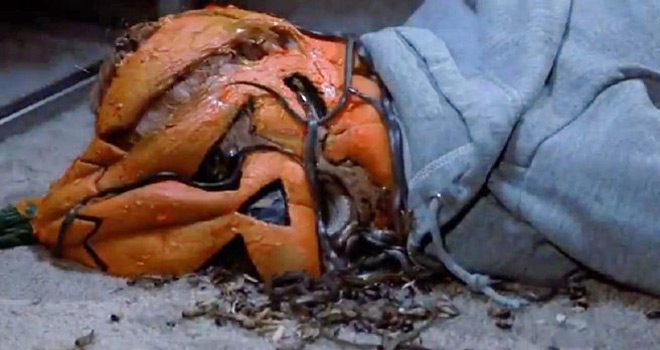 The bottomline, Halloween III: The Season of the Witch is a very good film and had it not fallen under the Halloween moniker, it may have been more successful. It is just funny how people held out hope that Michael Myers would appear, even though he was not in the trailer at all. He does make a brief appearance, however, not in the way fans had hoped. Silver Shamrock was sponsoring a Halloween movie marathon before the “big giveaway” and Michael is shown briefly in a commercial at the bar where Dr. Challis was drinking. Funny enough, even Jamie Lee Curtis makes an appearance, though in voice-over only as the Telephone Operator and Curfew Announcer.

Even after 35 years, if someone’s only argument on why they do not like Halloween III: The Season of the Witch is simply “Because Michael’s not there,” then they are not giving a good film a fair chance. The “why” of Halloween III was made quite clear, as Carpenter himself expressed his intentions many, many times of continuing without Michael, so people should not have expected him. Simply put, Halloween III: Season of the Witch is a highly enjoyable film with above average acting, good directing, and an innovative storyline, even if it does not include the Shape. “It’s almost time, kids. The clock is ticking. Be in front of your TV sets for the Horrorthon, followed by the Big Giveaway. Don’t miss it. And don’t forget to wear your masks!” 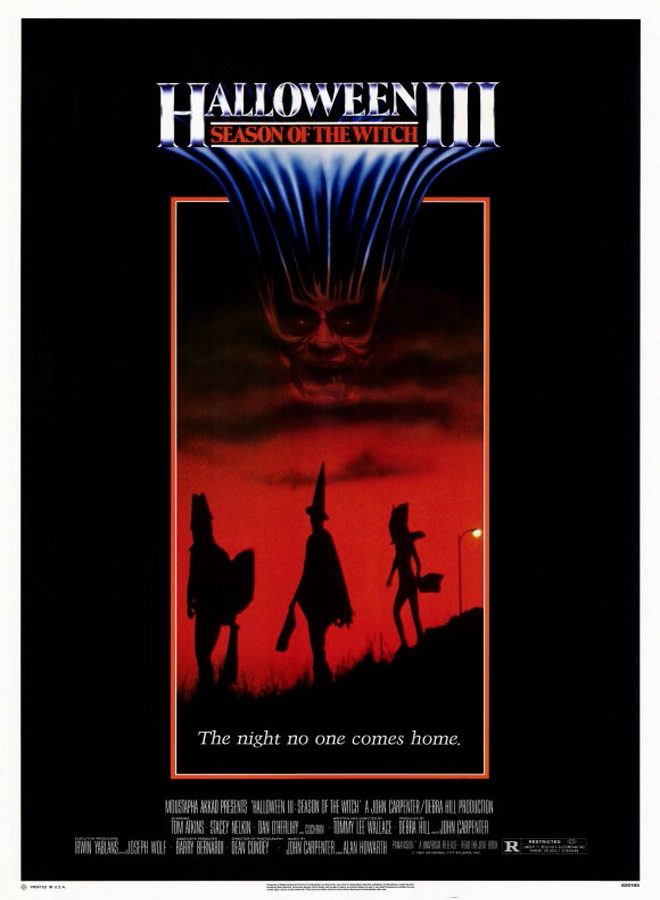