An overwhelming majority of Pop stars today have a clear cut path to make their way to the top – one that is paved with formulas and algorithms, sprinkled with scores of label staff to ensure a sure and simple rise to the corporate top. Then there is the 22-year old New Jersey-raised Ashley Frangipane, known widely by her stage name Halsey, who is a rising Pop diva with her own unique way. Hailing from humble Tumblr and YouTube followings in 2015 to a Billboard certified number one hit with EDM superstars the Chainsmokers last year, Halsey shatters all formulas for the cookie-cutter Pop singer.

Signing on with Astralwerks, she dropped her debut EP Room 93 back in 2014 followed by her anticipated full-length debut, Badlands, in August of 2015. Getting plenty of exposure touring, while Badlands resonated with hundreds of thousands of fans upon release, to many, it was one-dimensional and at times lyrically immature. However, the sonic qualities and the synth-infused instrumentation of Badlands pushed the release to the top of the charts, gaining Halsey serious airplay as she sold out venues across the US on her Badlands Tour. As a result, Badlands quickly became a staple in internet culture, following the likes of Tumblr-aesthetic fames The 1975 and Arctic Monkeys.

Returning on June 2, 2017 with a sophomore album, Hopeless Fountain Kingdom drastically moves away from the uninvolved, shallow themes of Badlands in a complete way. Showing Halsey’s growth, it incorporates witty, dark synth-based Pop that is truly multi-dimensional. In fact, each track displays a new concept or emotion that peels back each layer of humanity within the Halsey universe, be it the stark reality of modern romance or the internal reflection that the Pop starlet undergoes throughout.

Fitting a concept, the standard release consists of 13-tracks with the 16-track deluxe edition featuring a reordered playlist in order to fit the storyline. That said, the 16-track deluxe edition commences with a lengthy intro, including Halsey’s rendition of a section from Shakespeare’s Romeo and Juliet, which blossoms into a layered part-harmonization, part-chant that washes over the listener like a warm tidal wave. It features dark lyricism and only meets satisfying layers of vocals to create the perfect setting for the album.

The first true song on Hopeless Fountain Kingdom is the experimentally blissful and minimalistic “100 Letters.” Written with Producer Ricky Reed, who previously collaborated with artists such as Jason Derulo and Meghan Trainor, the song is surprisingly weightless in sonality but packs a punch lyrically. A bold step forward, it highlights Halsey’s wit in lyric writing as she sings, “I said, ‘I’m not something to butter up and taste when you get bored/Cuz I have spent too many nights on dirty bathroom floors / to find some peace and quiet right behind a wooden door.”  Moving on, the hand-drum driven tune then carries into the album’s first promotional single, “Eyes Closed,” which opens with the guitar riff reminiscent of The xx and a bassline right off the Weeknd’s latest release. Full of space and plenty of reverb, this track would be exceptional in a dance hall.

From here, the album takes on a life of its own. Interestingly enough, one of the album’s most well-rounded pieces, “Heaven in Hiding,” is only available on the deluxe edition, so it is recommended to spring for it. Lyrically painting a picture, Halsey brings it all to life here with a wonderful vocal performance. Then there are an array of different textures ranging from the darker “Alone,” to catchy single “Now or Never,” to Hip Hop flavored “Bad at Love.”

In addition, Halsey benefits greatly from various collaborations including the single “Strangers” where she and Lauren Jauregui feed off one another in an exceptional way. Then, other collaborations that miss the mark slightly include “Lie” and album closer “Hopeless.” For “Lie” Halsey’s voice holds its own just fine, and it feels like Quavo’s contribute is unfitting. As for “Hopeless,” Cashmere Cat’s production is solid but the beat is a little lackluster. That said, Halsey continues to show tremendous growth until the final note echoes out.

Overall, Halsey has certainly taken strides forward since her debut Badlands, but definitely has some more obstacles to overcome. Not at all a knock, but more a compliment, considering all the potential Halsey has as an artist. With Hopeless Fountain Kingdom, Halsey begs to do something different, and it is that type of bold risk-taking that builds a star. For these reasons, CrypticRock gives this album 3.5 out of 5 stars. 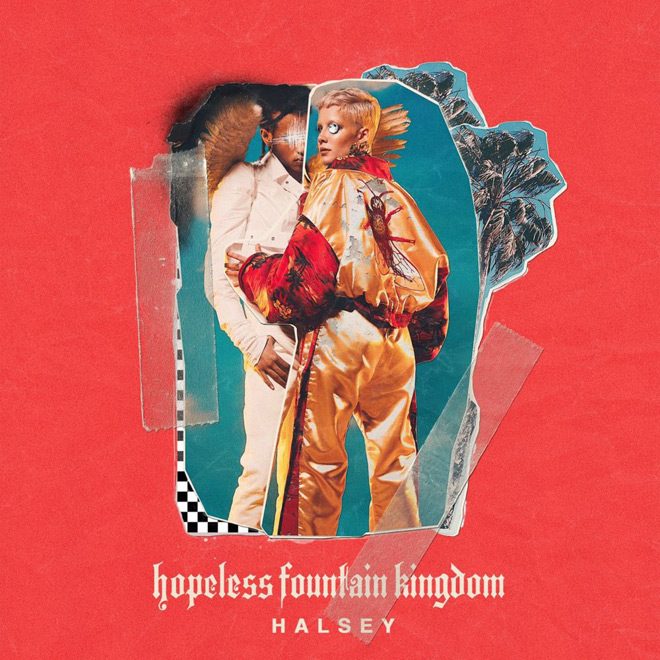