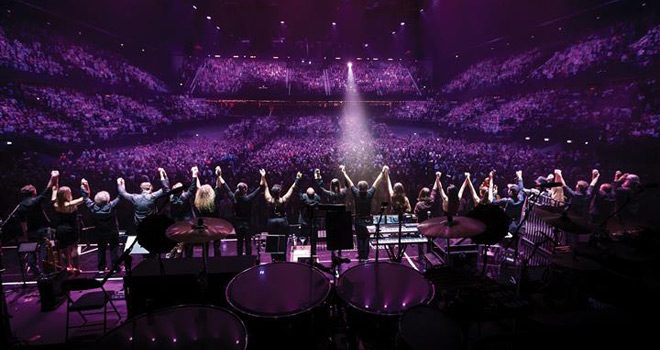 Academy Award Winning Composer Hans Zimmer has a resume that scrolls long past the one-page minimum. From late ’80s Family Dramas to recent Teens blockbusters, his range and scope is matched only by his creativity and flexibility.

Bringing it all together, Zimmer teamed up with Eagle Rock Entertainment to release Live In Prague on November 3, 2017. A performance filmed on May 7, 2016 in the beautiful Czech Republic city of Prague during Zimmer’s acclaimed European concert tour, he was accompanied by a band, orchestra, and choir, adding up to 72 musicians in total to share the stage. Released on DVD, Blu-ray, 2 CD, as a 4 LP set, along with Digital Video and Digital Audio, it is a visual and sonic experience that engages the senses.

A total of 15 arrangements performed, the compositions here vary from well-worn main theme to 1988’s Rain Man and music from 1989’s Driving Miss Daisy to almost brand-new 2013 film Man of Steel, as well as 2014 films The Amazing Spider-Man 2 and Interstellar. The focus is less on live improvisation and more on tone, selection, ordering, recording quality, and, most of all, flawless execution, all of which this two-disc set of music handles extremely well.

The jaunty opener from Driving Miss Daisy sets a light tone and, along with moments from Rain Man, bookends the first disc with slightly lighter fare from the start of his catalog. The piece quickly moves into excerpts from the Guy Ritchie 2009 reboot Sherlock Holmes and the animated 2005 Madagascar.

Then the concert makes a stern shift into 1995’s post-Cold War submarine Thriller Crimson Tide; the track is punctuated by a lone guitar solo and portions that almost seem to mirror 1990’s The Hunt for Red October. Furthermore, scenes from 1994’s The Lion King involve a rich chorus backing up male and female leads, as well as earthy tones you would expect to roll over the plains of Africa. It is easily apparent why Zimmer came away with an Academy Award for his work here; the mixture of traditional Western instruments, African rhythms, and spirited vocals paint a vivid picture.

From Africa, the audience depart on the seas for moments from The Pirates of the Caribbean; Zimmer composed music for the first four installments before handing the reins to a protege. Celtic-style violin introduces the seas and the life of Jack Sparrow, followed by traditional strings and even some electric guitar. This is before a light break comes in a clip from 1993’s True Romance, a playful selection that closes the film and otherwise masks the brute violence and gore of the picture. From here, we move into the main theme from Rain Man, a bare piano which fades into Jazz Fusion, replete with flute and Funk bass, just slick enough to keep you from donning a Members Only jacket and dancing behind a closed door.

The second disc of the collection opens with selections from Man of Steel; these works start subtle and build into a crescendo, one which hammers just hard enough to remind the listener that the music has been largely the only decent output from the more recent offerings of the DC universe. Thereafter, a slow serious note pervades with 1998’s The Thin Red Line, while “The Electro Suite: Themes from The Amazing Spider-Man” sounds almost like Devin Townsend, with its frantic energy, helped no doubt by Ex-The Smiths’ Guitarist Johnny Marr and other guests peppered throughout.

Later on, “The Dark Knight Trilogy” begins with excerpts from the middle film – the whiny grind of the Joker’s theme permeating the air – followed by a quiet interlude from the first film. The two are bruskly pushed aside by the anger and devotion of Bane within the context of the third and closing film. The sounds here are the best movements of the second disc, if not entire collection. Zimmer takes a break for “Aurora,” to a chilling story which takes the listener on a journey of discovery. It goes from the professional angst about being tasked with the first film, absorbing the painful loss of Actor Heath Ledger just after the second film, and, finally, with the theater shooting in the titular Denver suburb.

The show rounds out with two heady Christopher Nolan selections, with a wide swath of Interstellar moving into the final choices from the cerebral 2010 Thriller Inception. Even within the confines of these collaborations with Nolan, spanning from superheroes to space travel, to dreamlike espionage, Zimmer moves deftly between full orchestration, minimal composition, and electronic elements; the two scores are even further apart than the movies they describe.

Hearing any one of these scores live in their entirety would be a treat; having such a well-threaded collection of different points of Zimmer’s career, moving fluidly from genre, decade, and theme, made for an extremely pleasant listen. For these reasons, CrypticRock gives Hans Zimmer – Live in Prague 4 out of 5 stars. 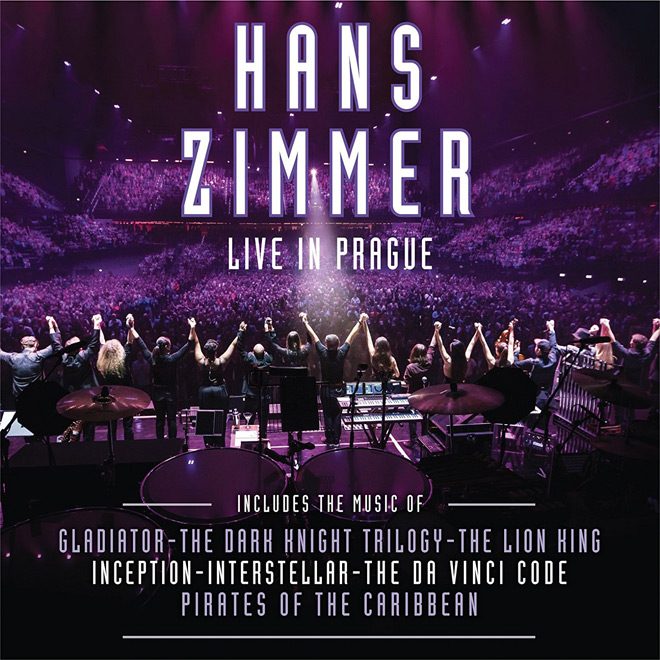