July 11, 2017 Harry Potter and the Order of the Phoenix – A Magical Journey 10 Years Later

“We’ve all got both light and dark inside us. What matters is the part we choose to act on. That’s who we really are.” These profound sentiments shared with Harry Potter by his godfather, Sirius Black, could be the words that define 2017’s arduous journey, but they are also those from 2004’s story Harry Potter and the Order of the Phoenix. The fifth overall novel released in the widely beloved, all-time bestselling book series written by J.K. Rowling, Harry Potter and the Order of the Phoenix makes the somewhat dramatic shift from fun and fantastically adventurous to emotional and edgy with dark undertones and strong political overtones. Here, Harry Potter not only changes dynamically throughout this installment, but he remains forever altered following his most difficult year yet at Hogwarts School of Witchcraft and Wizardry.

Speaking of firsts, Harry Potter and the Order of the Phoenix was a movie that actually experienced quite a bit. It was the first and only film whose screenplay was not written by Steve Kloves, but was instead created by Michael Goldenberg (Contact 1997, Green Lantern 2011). In addition, it was also the first to utilize the impressive direction skills of David Yates (Fantastic Beasts and Where to Find them 2016), who would then go on to direct the remaining four films of the franchise with great success.

Working with an estimated budget of $150 million, Yates conceptualized and then created the one Harry Potter film that had the biggest first-day gross of any of the other movies in the series; pulling in approximately $44 million domestically in the first day and $77 million opening weekend, as well as the nearly $194 million made internationally that same weekend.

The movie ran in theaters all over the world for a little over 22 weeks; and in that time made a reported $940 million, making it one of the highest grossing movie franchises of all-time, just behind others like Marvel Cinematic Universe, Star Wars, and Batman.

Harry Potter and the Order of the Phoenix centers on the repercussions of what takes place after the tragic concluding event at the Triwizard Tournament in the fourth Harry Potter installment, 2005’s Harry Potter and the Goblet of Fire. As previously mentioned, this film transports viewers to a much more dismal and somber atmosphere and time in young Harry’s life, as he struggles with both the feelings of isolation and abandonment, as well as the bleak, wrath-driven internal changes which seem to be gradually taking him over. Harry, played by Daniel Radcliffe (Horns 2013; Victor Frankenstein 2015), is eventually whisked away from his oppressive life at his dreaded aunt and uncle’s house, and brought to Sirius’ (Gary Oldman: Bram Stoker’s Dracula 1992, The Dark Knight Rises 2012) home, which also just so happens to be the remotely magical location of the headquarters for the recently reactivated secret organization known as The Order of the Phoenix.

This secretive group is comprised of familiar characters such as Sirius Black, Severus Snape – played by the late Alan Rickman (Die Hard 1988, Sweeney Todd: The Demon Barber of Fleet Street 2007), Arthur Weasley – played by Mark Williams and known exclusively for his character in these movies, Remus Lupin – played by David Thewlis (Naked 1993, Wonder Woman 2017), Alastor “Mad-Eye’ Moody – played by Brendan Gleeson (Troy 2004, Edge of Tomorrow 2014), and their fearless leader, Albus Dumbledore – played by Michael Gambon (Sleepy Hollow 1999, Harry Potter and the Prisoner of Azkaban 2004). Not to be overlooked, there was also a couple of newly introduced characters and members such as Nymphadora Tonks – played by Natalia Tena (About a Boy 2002, Game of Thrones TV series), and Kingsley Shacklebolt – played by George Harris (Raiders of the Lost Ark 1981, Layer Cake 2004).

Aside from The Order of the Phoenix, another secret club is formed when Harry realizes that the Minister for Magic, Cornelius Fudge – played by Robert Hardy (Sense and Sensibility 1995, Harry Potter and the Chamber of Secrets 2002) – is taking over Hogwarts via the assistance of one of the most hated literary/film characters of all time, Dolores Umbridge – played by Imelda Staunton (Vera Drake 2004, Maleficent 2014); as a result of Fudge’s increasing paranoia and utter refusal to believe in the fact that Lord Voldemort – played by Ralph Fiennes (Schindler’s List 1993, The Grand Budapest Hotel 2014) – has returned and is already taking steps towards regaining control of the world.

Harry’s solution to this dilemma is to create his very own secret organization known as Dumbledore’s Army (DA), which allows him to train students/members on how to properly conjure defensive spells to battle both dark forces which are closing in on Hogwarts; the Ministry of Magic, whose propaganda further perpetuates the erroneous claims Harry is a liar and Voldemort is still dead, as well as Voldemort (Fiennes) himself and his army of Death Eaters.

These teenagers eventually become the first line of defense and the only means of fortifying the “magical weapon” that the Death Eaters, like Lucius Malfoy – played by Jason Isaacs (The Patriot 2000, Peter Pan 2003) and Bellatrix LeStrange – played by Helena Bonham Carter (Fight Club 1999, Sweeney Todd: The Demon Barber of Fleet Street 2007), desperately seek to retrieve for their master. This results in a powerfully emotional, action-packed conclusion of epic and magically catastrophic proportions.

In Harry Potter and the Order of the Phoenix, Harry’s mental connection with Voldemort is increasingly intensifying now that he has returned to full form; and now Harry is suffering from real-time visions of what Voldemort is actually seeing and doing, in addition to taking on some of the more disturbing characteristics of his arch nemesis that are progressively changing him into someone neither he nor his friends and family recognize anymore. He is reckless, impulsive, bitter, alone, and even outspoken and disrespectful.

Unlike the films that came before, Harry Potter and the Order of the Phoenix explored and delved into the much darker themes of isolation, suppression of feelings, mental decline, anger, revenge, and significant and almost unbearable loss; which was perfectly conveyed through stellar performances, exceptional direction, the use of awe-inspiring and visually-striking cinematography, and a poignant score that could penetrate the heart and soul of even the most austere viewer. It is also worth noting that this was the first Harry Potter film which did not utilize any of Britain’s amazing castles or cathedrals because all of the interior Hogwarts scenes were filmed on studio sets.

In spite of being the longest book in the entire series, its film adaptation, Harry Potter and the Order of the Phoenix, turned out to be the second shortest in the franchise; which certainly suggests that much was left out of the film. Even so, it still engrossed viewers and set the tone for the more ominous Harry Potter movies which would soon follow. 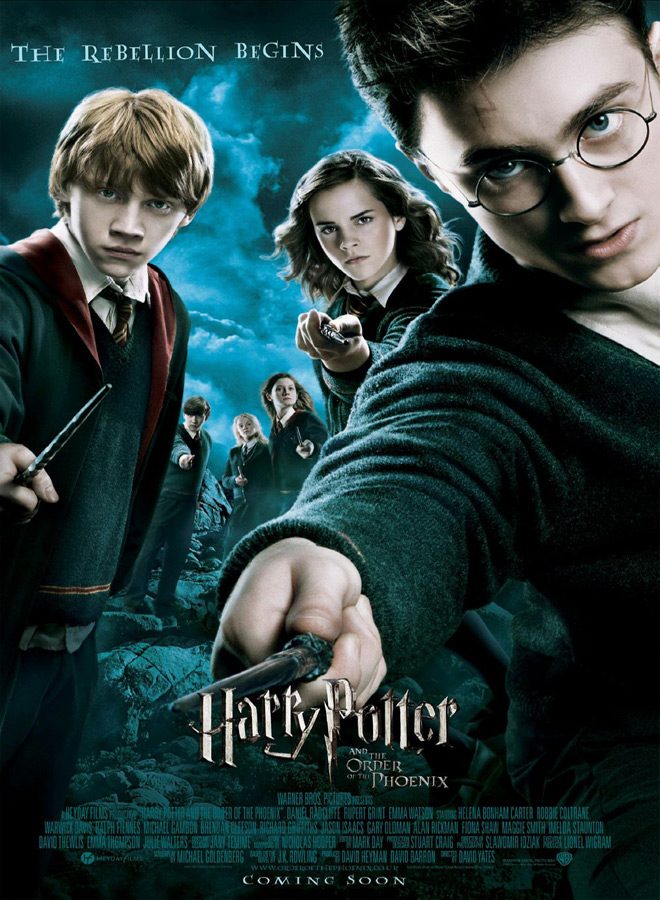 Purchase Harry Potter and the Order of the Phoenix: Amazon | iTunes