Hatchet, spit out of the Bay Area around San Francisco, California, have been going their unflinching way since 2006. Founded by Singer and Lead Guitarist Julz Ramos, the four-piece committed themselves to the old-school Thrash Metal of those who came before them. Influenced as kids by the pioneers from their region who changed the music-history forever, Hatchet signed their first record deal with Metal Blade Records in 2008, releasing their debut album Awaiting Evil after two demos and the appearance on the Thrash Metal Warriors Compilation. Now in 2015, they return with a follow-up to 2013′s Dawn Of The End with ten new tracks on new album Fear Beyond Lunacy. Released via The End Records, Hatchet bring themselves to a new level with their latest effort.

Once again, with a new lineup in the rhythm-section, beside Ramos, Hatchet is rounded out by Clayton Cagle (guitar), Kody Barba (bass), and Drummer Ben Smith. With the highly anticipated Fear Beyond Lunacy, it comes as no surprise amos and the band take no prisoners sound-wise. According to the principle, “We kill em all who ride the lightning because this is our business and we are bonded by blood,“ the Thrash-cluster bursts out in ten tracks, including the instrumental, almost two-minute intro, entitled “Where Time Cannot Exist.” From the start, Hatchet offers a flawless Thrash storm coined by double lead guitar-riffing and Ramos’ vocals, which remind here and there on Paul Baloff (RIP). Another influence noted is the melodic guitar work that is very reminiscent of Machine Head’s Robb Flynn.

As songs like the opening “Living Extinction” or “Lethal Injustice” are prepared with an identical formulation, it is very hard to distinguish many of tracks from Fear Beyond Lunacy. Although, the hymn “In Fear We Trust“ and the album closing “Frozen Hell” drill into the listener’s head from the circular guitar hook-lines that make them stand out. Furthermore, “Prophet of Delusion” is a track which meets the highest possible technical level and reminds of Machine Head hooks in beginning and end.

In other respects, Fear Beyond Lunacy is extremely solid musically, but it is impossible to re-create the vibes and the feelings of ’80s Thrash classics. Indeed, Hatchet may be uncompromising and very talented, but the rebellion from back then is not to reproduce. In addition, some speed fluctuation would have been very becoming to the songs, instead of helping oneself to the same beat and tempo always. While some Thrash fans will lift Fear Beyond Lunacy on the genre throne in 2015, the objective listener will be much more careful with the classification of this output. Above all, Hatchet have tremendous promise as they move forward, and Fear Beyond Lunacy is an effort the hard-working Ramos should be proud of as they continue to build a name. With that said, Thrash fans should form their own opinion, steer clear of falling back on old classic comparisons, and look to the new blood Hatchet offers. CrypticRock gives Fear Beyond Lunacy a solid 3 out of 5 stars. 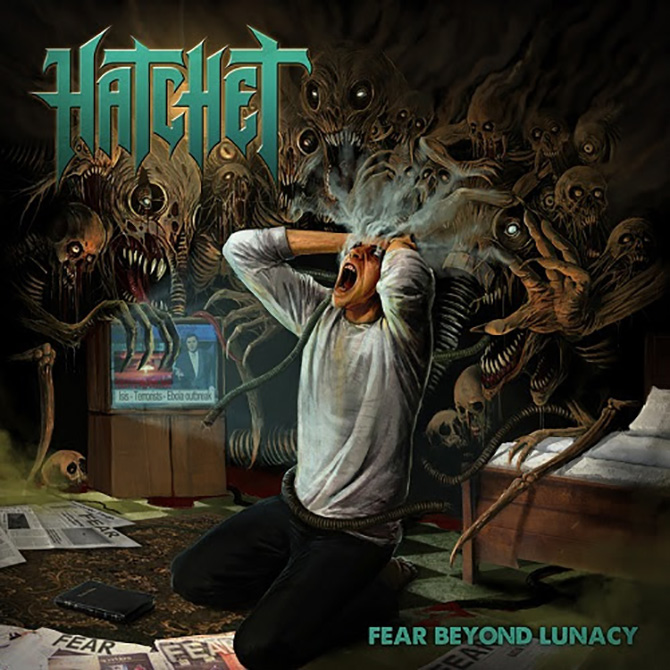