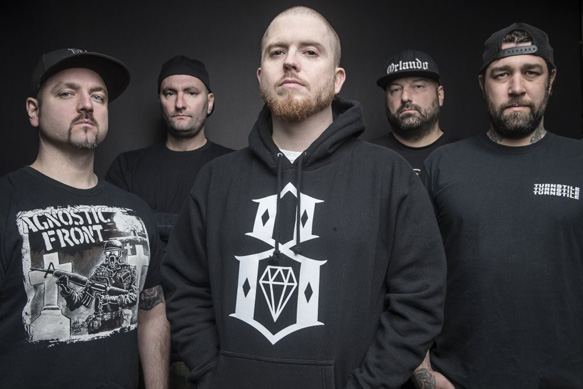 Heavy Metal, on a global scale, contains within it a vast number of genres that are as diverse as the many languages and dialects within those languages that have spread their wealth all over the world. Culture and location actually has an impact on certain genres of Metal as well. For example, Hardcore is a very broad term that varies greatly in tone and style from coast to coast and country to country. Hatebreed is one of these Hardcore bands from the East Coast of the USA, more specifically Connecticut. Having originated in the early portion of the ’90s, they posses a signature style that is not typically found on the West Coast or other locations abroad. In addition, Hatebreed also has elements of Metalcore and Thrash and the amount of each is dosed diversely in each of their seven studio albums.

Their latest studio album, The Concrete Confessional, released via Nuclear Blast on May 13th, features the magic number of thirteen songs spanning just over thirty-three minutes. With no songs over three minutes long, this is definitely a Thrash-heavy album and, as a common theme for this type of Metal band in 2016, of course taps into topics ranging from societal issues, economic issues, and politics conveyed in the message they are trying to send to the listener.

Having gone through a few guitar players over the years, and with not too much change in line up otherwise, they have landed on top of their game for sure with Frank Novinec from Ringworm as the most recently addition, even though he has been involved for a decade now. The other members of course include Jamey Jasta on vocals, Chris Beattie on bass guitar, Wayne Lozinak also on guitar; who returned in 2009, and Matt Byrne on drums since 2001. With that, the five members begin The Concrete Confessional with “A.D.,” which is believed to stand for American Dream. With its speedy, catchy riffs, bad-ass Hardcore, mainly in-your-face vocals, and very political lyrics seemingly fighting against the corrupt system that our government is often defined as that keeps growing dirtier by the minute, this is a strong start to an even stronger album.

Next is another speedy rager called “Looking Down The Barrel Of Today” that is really witty and spot-on to the average middle class humanitarian concerns. Most of the lyrics and vocal style on this album are extremely catchy, and appropriately angrily flowing in perfect Hardcore, punky Thrash style. Jasta is the perfect East Coast Hardcore bad-ass vocalist whose extreme excellence expresses that daily struggle called life; a constant battle increasing in its difficulties as time speeds on and the corrupt system expands its evil. As the album charges forward, “From Grace We’ve Fallen” brings in the catchy and dominating guitar and chorus while the drumming kicks everyone’s ass from the back of the line on the battlefield.

As is a common theme with Hatebreed albums, the songs all take on a similar message and groove, yet, despite the similarities, there are always new riffs and new tones for each tune, and there really is never a dull moment. The track “Something’s Off” perhaps takes on the most old school simplistic jam style and vocal tone of the lot and still manages to speak volumes to this modern day and age. Then, “Remember When” is a speedy, thrashy, Slayer-esque song with some out-of-the-box drumming and metallic, Hardcore riffs.

Thereafter is “Slaughtered In Their Dreams,” which has perhaps the most brutal Metalcore lyrics about children being slaughtered in their dreams, and it is a favored track with the crafty and intricately speedy guitar work. The next track, “The Apex Within,” has a definite Hardcore Punk reprimanding style that, despite its seemingly simple structure, has much to offer to the whole of the album. Going out with fury, “Save Your Masters” is a dominatingly brutal end that is suggested to express the hatred towards the wealthier leaders of society today. The ones that tend to lean towards those in such political control as the congress and presidential figures who are explicably told by the average citizen to go serve their masters in hell because there is no need for such hatred and evil on this planet as we stand today.

As far as Hatebreed albums go, The Concrete Confessional is modern and more crossover Thrash than some previous albums, which seems to be a style that is making quite a comeback these days with the state of our crippled world. It is highly recommended to get on board with this line of thinking because no one else can change the average person’s worldly outcome besides themselves in the end. With that said, The Concrete Confessional relishes in just that ideology. Without further contemplation, CrypticRock gives this album a 4 out of 5 stars. 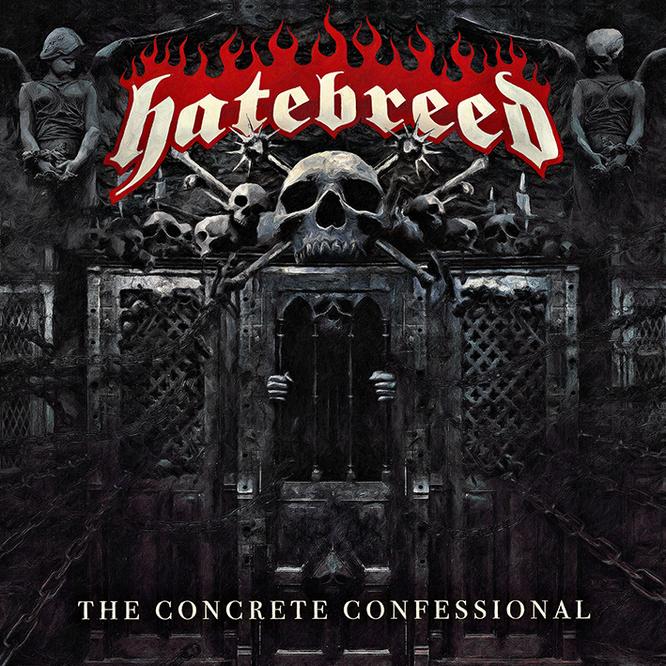 Accept – Too Mean To Die (Album Review) Korpiklaani – Jylhä (Album Review)
Like the in-depth, diverse coverage of Cryptic Rock? Help us in support to keep the magazine going strong for years to come with a small donation.