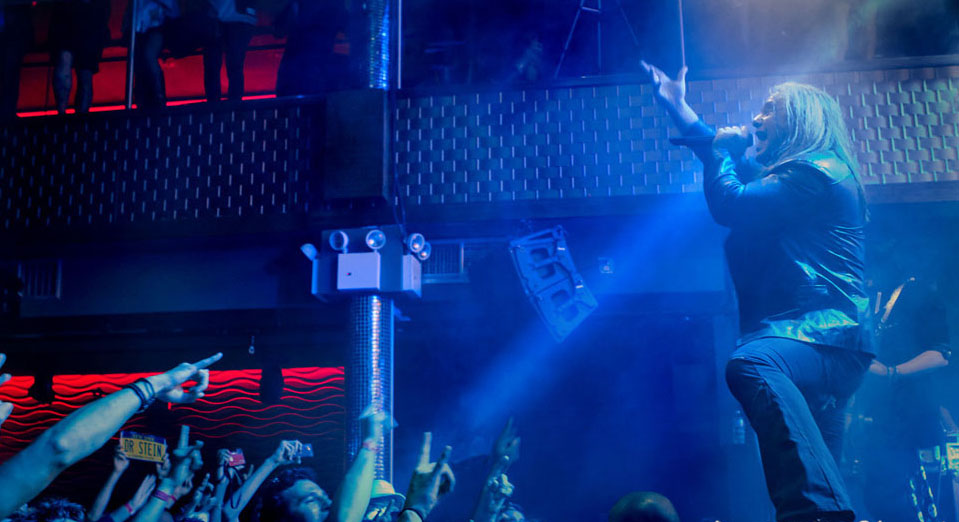 On September 24th Helloween came back to New York City after a five year absence.  This time around they played at a fairly new venue called Stage 48. It’s somewhat of a smaller venue but the stage itself makes up for it, with 3 large TV screens, and excellent lighting that add to the bands performance. Opening the evening up were tri-state area metal acts Cypher Seer and Coldsteel.

From across the river in Union, New Jersey Cypher Seer started things off right with their traditional heavy metal sound.  Lead by Zeno Rodrigo on vocals the band provided a soaring performance which mixed in well for a Helloween type crowd.

Next up were Long Island, New York natives Coldsteel. Having been active in the late 1980’s the band released their first and only full length record entitled Freakboy (1992). Disbanding for nearly 16 years the underground thrashers are back with a vengeance. Returning to the fold are original vocalist Troy Norr, guitari Joe Shavel, and drummer Hal Aponte, along with new members bassist Doug O’Dell, and guitar is Eddie Campbell. The 5 piece metal appears to be tighter than ever and rocked a large crowd of eager metal heads. Mixing things up with their earlier material and their newest EP American Idle (2013). Their performance got the crowd going before Helloween hit the stage.

Before Helloween hit the stage, AC/DCs “For Those About To Rock” was played which was followed by “Walls Of Jericho”. The crowd was pumped as Helloween walked out on stage and went straight into “Eagle Fly Free”. With no stopping they went straight into “Nabataea”, and “Straight Out Of Hell” off the new offering, Straight Out of Hell (2013). They slowed things down a little with “Where the Sinners Go” from their “7 Sinners” album. Staying at the same pace they went back to their new album with “Waiting for the Thunder”. Helloween sped things up a little with a song they haven’t played in a while from their “Time Of The Oath” album called “Steel Tormentor”. The band took a little break and let Dani Loeble have the stage for a drum solo. When everyone came back they went right into “I’m Alive” from their “Keeper of the Seven Keys Part 1” album and the crowd went crazy again. Throughout the whole show the crowd was extremely pumped and there was even a small mosh pit that seemed to last the whole show, even during the ballads. “Live Now!” off the new album was next along with “Hold Me In Your Arms”. “If I Could Fly”, “Hell Was Made In Heaven” and “Power” would close out the first set. For the first encore they would get the crowd revved up once more when they played “Are You Metal?” and ended the encore with “Dr. Stein”. Their Final encore had them play “Future World” and “I Want Out”.

The evening overall was a perfect new of high octane traditional style heavy metal. There were plenty of heads banging, metal horns flying, and fans singing along to please the metal gods. Helloween played flawlessly and you could just see by their performance that they really enjoy what they are doing. Their fans really appreciated them coming back to New York as well. Even though their set was mainly newer Deris era, the fans sang along to with each and every song. If there was something Helloween fans would to say about the show, it would be that it was definitely worth the wait.