What is worse than having spent so many days and nights putting together a puzzle only to discover that one lousy piece is missing? This missing piece is what will keep the puzzle from ever being completed, and who knows for how long it will be until the missing piece is ever found. Now, what if an incomplete puzzle could be compared to that of a movie?

Pondering this very thought, thirty years ago, on September 18, 1987, New World Pictures introduced a fresh, new face of evil into the cinematic world of Horror that has since become a permanent staple in the genre in the form of Clive Barker’s Hellraiser. Released a week following the femme fatale box-office smash Fatal Attraction, and the same weekend as Rom Com The Pick-up Artist as well as the take no shit The Principal starring Jim Belushi, Hellraiser quickly became a sleeper-hit, going on to gross over $14 million during its theatrical-run. A movie packed with gore, a strong story, while introducing hell’s gatekeeper, Pinhead, Hellraiser offers plenty to talk about. 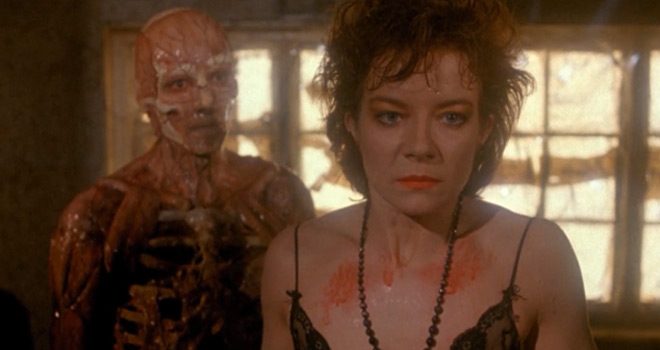 Hellraiser is a spooky tale interweaving lust, love, and strong sexual desire, and just how far people will go to have each of these elements fulfilled. Surrounding this tale is a mysterious puzzle box, Lemarchand’s box, that, when solved, will open a doorway into another realm where all desires and pleasures are to be satisfied – or so someone thinks. Beyond this newly-opened doorway lies an evil so fierce, so powerful, it would be best for anyone not to solve the puzzle at all – and maybe, just maybe, safely sticking to pornography, instead.

The evil beyond the doorway is a group of beings called The Cenobites that love bringing to the plate an extreme amount of pain and torture before any pleasure is to be had. The Cenobites – Nicholas Vince as Chattering Cenobite, Simon Bamford as ‘Butterball’ Cenobite, and Grace Kirby as Female Cenobite – destroy any who solve the puzzle, ripping out the soul from their vessel, trapping it in a hell with no way to escape. Leading this band of evil non-do-gooders is the Hell Priest (Doug Bradley: The Cottage 2008, Scream Park 2013), infamously becoming known as Pinhead in popular culture. Unlike any Horror cinema figure that came before, he makes no visitor feel welcomed, but will certainly make one feel pain.

Who was behind this beautifully demonic and spooky tale? None other than the aforementioned renowned, award-winning Author Clive Barker. Going on to pen a list of compelling stories, Barker successfully adapted his own 1986 novella, The Hellbound Heart, into what became the movie Hellraiser in 1987. Luckily, for many Horror fans, Barker directed his own story for the big screen, marking this the first time he ever sat in the director’s chair. 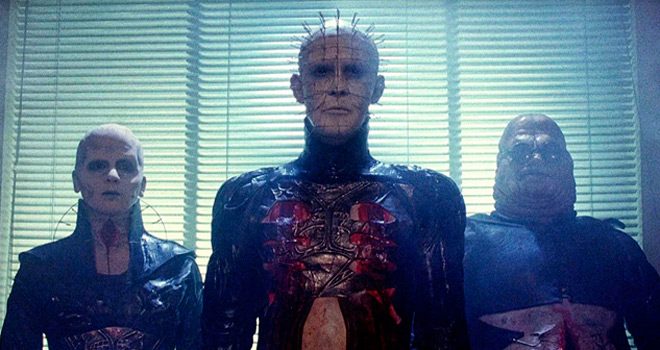 Much of Hellraiser itself goes, Barker had an unfortunate price to pay to get the film finished and ready for its release. This price has always been behind the pain and suffering of Hellraiser over the past 30 years; something that no moviegoer or die-hard Horror fan could ever ignore. It is the feeling that maybe this puzzle – this, movie – is not fully complete. The feeling is that maybe, just maybe, there are a few too many pieces missing from this juggernaut of a Horror movie.

Puzzles are made to be put together in its entirety, no? So, why would a movie have to suffer from such a disastrous result of incompleteness? Censorship. Well the MPAA (Motion Picture Association of America) to be exact. Set to give the film an X-rating if Barker did not make several cuts, they are the main reason so many pieces are missing.

Sadly, though, after 30 long years, none of these pieces have yet to be returned or found. Many fans may never know what Barker’s complete film might have been. Regardless, despite the knifing of much of the gory parts, the kills, and a lot of the passionate sexy-time between the two main antagonists, Larry Cotton (Andrew Robinson: Dirty Harry 1971, Cobra 1986) and Julia Cotton (Clare Higgins: Pride and Prejudice series, The Worst Witch series), the practical SFX in Hellraiser are outstanding, and quite inventive for having only an estimated million dollars as a budget. 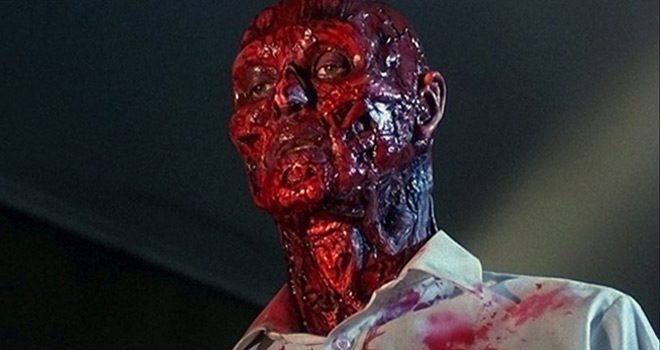 As a result, Hellraiser was a massive success, and what does success lead to? Sequels! Spawning eight to be exact. Barker only wrote and directed the original, but is credited as for production of 1988’s follow-up Hellbound: Hellraiser II, along with 1992’s Hellraiser III: Hell on Earth, and 1996’s Hellraiser: Bloodline. Seldom do sequels live up to the original story, each of the sequels of Hellraiser, including the most recent, 2011’s Hellraiser: Revelations, turn the storyline into straight-up gore fests.

As for the aforementioned Hell Priest: in the sequels to follow 1987’s Hellraiser, he became better known as Pinhead. In these sequels, this evil being was brought out into the spotlight, giving Pinhead much more screen time. This, in turn, created yet another prolific face in the Horror genre, alongside Freddy Krueger, Jason Voorhees, and Michael Myers. Pinhead, a fresh (pinned) face of Horror for a new generation, was different than his contemporaries, as he was calm, collective, and highly intelligent. He struck fear into viewers with his intellect, and, of course, his eloquent speech.

Showing there is interest in the Hellraiser franchise, there is a new film set to be released sometime in the forthcoming future called Hellraiser: Judgement. Special Effects Artist Gary J.Turncliff is handling the screenplay and director duties – much like he had done for the aforementioned Dimension Films’ Hellraiser: Revelations. A drawing card, A Nightmare On Elm Street‘s very own Heather Langenkamp is set to star in the film. However, the film has a lot going against it. For one, Clive Barker is sadly not involved when hopes are he would be brought on board. In addition, Doug Bradley has declined to come on board as Pinhead once again, leaving little hope for fan interest in the new installment. 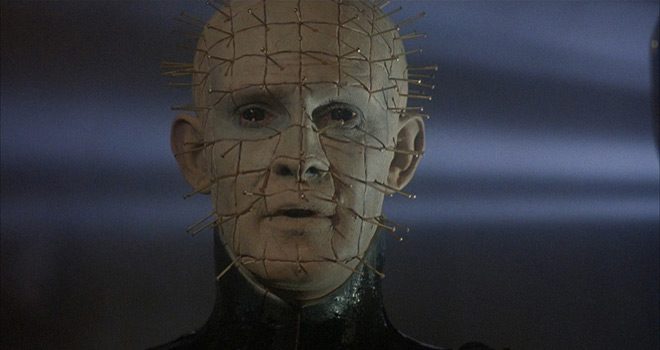 Nonetheless, as the years have come and gone, and as many more will follow, one thing is for certain, Clive Barker’s original Hellraiser is one Horror film that will never die, nor will it ever age. Within its bloodline lay an inferno full of the hellbound hearts of so many fans. These deader-cated hell seekers are what will keep Barker’s vision of a hellworld alive and well – in turn, showing new fans…such sights to be seen. 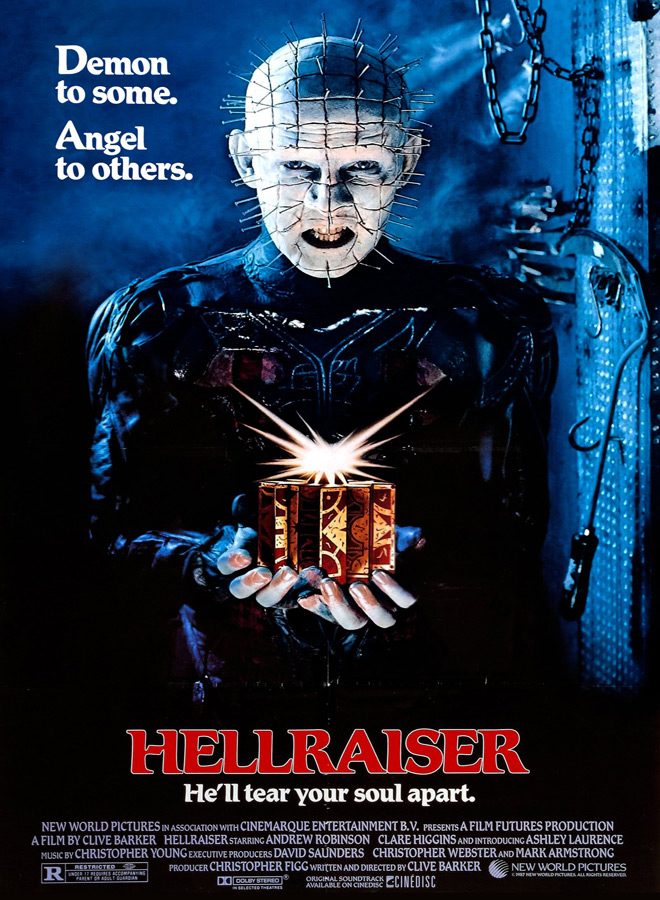