Back in 1987, the dark imagination of famed Author Clive Barker brought audiences a new glimpse into Horror with Hellraiser. A film different than others at the time, Barker created a dark underworld controlled by an infamous group of hellish punishers called the Cenobites. Creating imagery that warped the mind of viewers, much like Michael Myers, Jason Voorhees, and Freddy Krueger, a new face of modern Horror was born with lead Cenobite Pinhead. 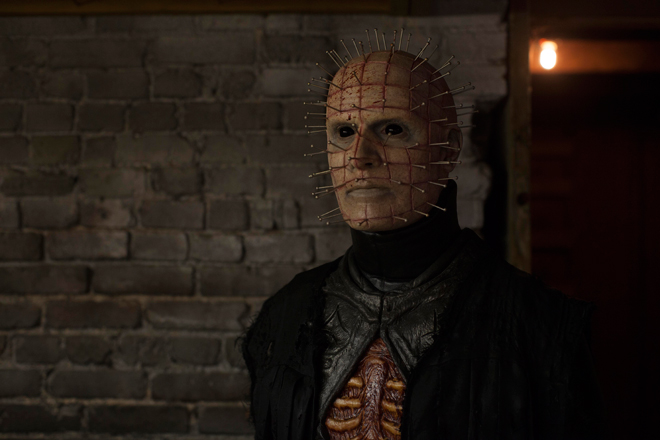 Now over three decades removed from the original Hellraiser film, eight more subsequent sequels have been spawned, and after much discussion, Hellraiser returns in 2018 with the tenth overall chapter, Hellraiser: Judgement. Set for release on Tuesday, February 13, 2018 on Blu-ray, DVD, Digital, and On Demand through Lionsgate, it marks the first Hellraiser film since 2011’s Hellraiser: Revelations.

An exciting proposition for dedicated fans of the franchise, there are a few articles of information that should be brought to light prior to examining the film. First, news began to surface back in 2013 that the next Hellraiser film was going to be a remake of the original, but with Clive Barker returning to write the story, and more than likely bring back the man who brought Pinhead to life, Doug Bradley. Barker alleges the script was in fact written and delivered to Dimension Films some time ago, but no progress was made putting it into production.

A head scratcher for any fan of the series, regrettably it looks like Clive Barker’s new Hellraiser is all by dead in the water for now. As a result, Dimension Films moved forward with a new Hellraiser film called Hellraiser: Judgement. For the new film, they would bring back Gary J. Tunnicliffe, who wrote Hellraiser: Revelations. This time, Tunnicliffe takes on both directing and writing duties.

For those unaware, Tunnicliffe does have a history with Hellraiser, working as a makeup artist on 1992’s Hellraiser III: Hell on Earth. That in mind, it was a self-proclaimed dream for him to have a chance to write a Hellraiser film. Doing just that in 2011, now he gets the chance to improve on his contribution to the franchise with Hellraiser: Judgement. So, how does he fare? 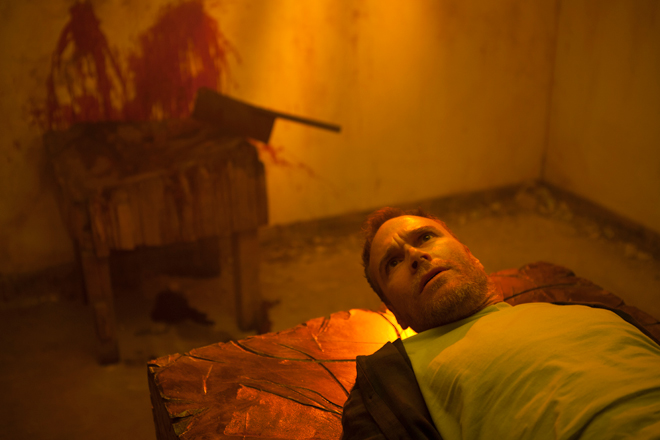 Well, before anyone rush to ‘judgement’ in regards to the tenth overall Hellraiser film, they must understand this is not Clive Barker. Barker has not been involved in any capacity of a Hellraiser film since Hellraiser III: Hell on Earth where he acted as executive producer. That is 26 years ago, so get it out of your head that this is going to be an old school Hellraiser flick.

Additionally, Doug Bradley respectfully declined to reprise his role as Pinhead. A very unfortunate fact for fans, because even while various writers and directors held the puzzle box for many years, at least Bradley was always the eloquent voice and face of evil on the screen. This marks the second consecutive film without Bradley as Pinhead and the first with Paul T. Taylor (Sin City 2005, Alternative Math 2017) taking on the role. In all honesty, Taylor does a fitting job as Pinhead, and in many’s eyes could be looked at as more effectively portraying the character than Stephan Smith Collins, who played Pinhead in Hellraiser: Revelations.

The only issue is Taylor’s Pinhead has little time on camera. In fact, it seems like the new story shows very little of Pinhead at all. He also does not seem to have as much power as the Pinhead of the past, which is a bit different, as well as disappointing. This Pinhead almost seems like a secondary character in the story with the three detectives assigned to a solve a horrific serial-killer case taking much of the attention. The three law enforcement officers are two brothers, Detective Sean Carter (Damon Carney: The Lone Ranger 2013, Logan 2017) and Detective Dennis Carter (Randy Wayne: Escape Room 2017, Death Pool 2017), teaming up with newly assigned Christine Egerton (Alexandra Harris: The Posthuman Project 2014, The Veil 2017). Together they are trying to catch a diabolical killer referring to himself as The Preceptor.

This killer punishes their victims for their sins, making it an almost religious cleansing. Working hard to catch him, lead detective, Sean Carter, stumbles into Pinhead and the Cenobites’ underworld. No, he does not open the puzzle box, like many others have in the past, but he visits an abandoned house where Pinhead’s crony, The Auditor (Gary J. Tunnicliffe), holds a hellish court session looking to pump the truth of his interviewee’s sins out of them. Following his transcription of each interviewee’s recount of their life, a disgusting character named The Assessor (John Gulager: Feast 2005, Piranha 3DD 2012) eats the papers written on, only to regurgitate them for a nude jury of women to pass judgement.

A rather disturbing and uncomfortable trial, it is inventive, yet completely takes away any power Pinhead possess. You do not even see him in many of the scenes where judgements are being passed. That said, much of the important dialogue is delegated to The Auditor, an interesting new character injected into the Hellraiser universe. The Auditor is equally as intelligent as Pinhead and quick on his feet, which raises the question, will fans see more of this character in-depth in future Hellraiser films?

Whatever it may be, Hellraiser: Judgement is by no means a terrible film. The story, while at times a little bit confusing, is very compelling and will no doubt keep viewer’s attention for the entire 81 minutes it runs. It does leave off with a sort of anti-climatic ending though, almost like an episode of your favorite television series where you have to wait a week to see what happens next. Again, this could very well be done by design, paving the way for more sequels. 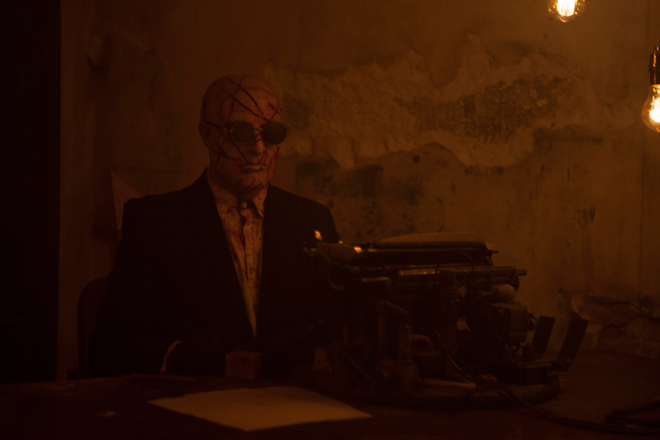 Either way, Hellraiser: Judgement’s story is a step up from Hellraiser: Revelations for Tunnicliffe. It is dark, twisted, and effective, yet would have benefited greatly if Bradley returned at Pinhead. This is no disrespect to Paul T. Taylor, it is just a matter of fact that Bradley spent nearly two decades behind the makeup, essentially becoming the character.

For those looking for a new Horror film that is entertaining while equally disturbing at times, Hellraiser: Judgement is not a bad choice. Go into it with an open mind and remember what you are getting. Afterall, Hellraiser has been kept afloat for over 30 years. That is a hellish blessing within itself. For these reasons, CrypticRock gives Hellraiser: Judgement 3.5 out of 5 stars. 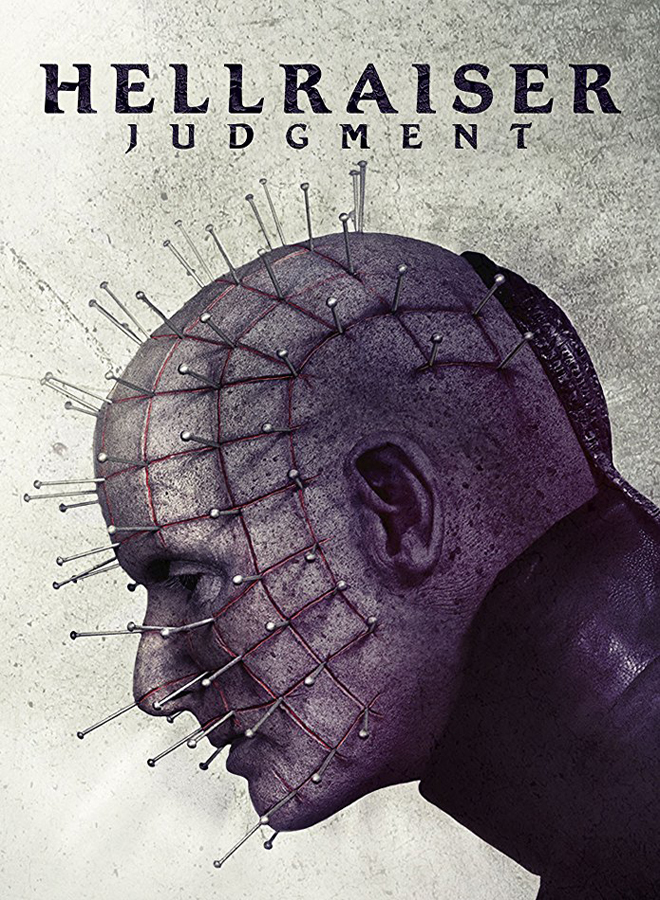