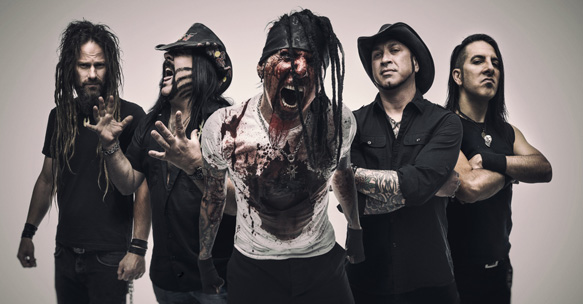 Once thought as just another one and done Heavy Metal supergroup project, Texas-based Hellyeah has proudly given the middle finger to nay-saying critics for a decade now. Led by Mudvayne vocalist Chad Gray, Pantera/Damageplan drummer Vinnie Paul, as well as Nothingface guitarist Tom Maxwell, in recent years they added former Bloodsimple bassist Kyle Sanders and guitarist Christian Brady to their core.

Progressing in their sound from 2007’s self-titled to 2012’s Band of Brothers, it would be 2014’s Blood for Blood which would see the band find their true identity. No more subconsciously looking to appease what others expected of them, Blood for Blood was a dominant record that put Hellyeah into an entirely new stratosphere. Now, after two years of relentless touring, they are back with their fifth studio album, apply titled Unden!able. The cover features a sinister eye with an explanation point where the pupil should be, and it implies a representation of a view into the soul of a Metalhead who naturally takes everything to the extreme, is always on the go, and will always be ready to fight for what’s right. Over forty-five minutes of new material, fans wondered, would Unden!able pick up where Blood for Blood left off, or take Hellyeah once again in a new direction.

Pondering the above thought, upon diving into Unden!able, one can find a diverse mix of styles crafted into each song, yet the major constant remains the Industrial flavor that can be comparable to the vibe found in White Zombie. It all starts out with two intro songs, “!”, and “X,” both which are full to the brim of basic mechanical grooves and effects that set the mood for what is to come. The drums on the second track are exactly as they need to be, and the pace fluctuations are perfection. Paul continues on this righteous and down to earth path throughout, and while his personal style is not your average Industrial style, he brings in that groove tempo contradiction that works to Hellyeah’s advantage on most of the tracks.

Then comes “Scratch A Lie,” which is a fun track with speedy tempos and Industrial grooves that ride forth until they cross the finish line. One of the most marketable cuts off the album is most definitely “Be Unden!able,” which interestingly enough has potential to pan out as the least exciting of the lot, but still is not bad at all. The fifth track, “Human,” is where the album takes a turn to a more somber power feel with clean vocal by Gray. Mixing fury with melodic guitars and essential Gray yells, the song weaves in and out of dark and heavier moments nicely.

Later on, perhaps the most similar to what Hellyeah fans remember from the band’s previous work, comes the song “Blood Plague.” A heavy hitter, it features an extra Industrial direction, which is a step up for the band, and favorably the key to standing out among a sea of Groove Metal bands. Then comes a surprising cover of Phil Collins’ disfranchised hit “I Don’t Care Anymore” where they mix in guitar parts from the late Dimebag Darrell. While it is an interesting rendition, with its Industrial flavor, it could possibly work even better if done in an angrier, more rage-filled tone. Nonetheless, Gray utilizes his unique voice to emphasis the emotion of the bold lyrics.

Moving on rather smoothly, “Live or Die” and, later, “Startariot” contain the most down to earth, entertainingly catchy groove-driven riffs of the album. Some may think they have a similar flavor to the essence of early Marilyn Manson. Then, in dramatic fashion, Hellyeah offer “Loves Fall,” which sees them go in a completely different direction. Any title containing the word love has the potential to become too sappy for its own good when referring to Heavy Metal, although Gray’s lyrics are well-composed as his delivery comes across sincere and from the heart. Finally, the track “Grave” is definitely the most Pantera-like of them all and makes for a great ending to Unden!able by taking listeners back in time and reminding them what is ultimately important in life.

Hellyeah prove they are an ever-evolving entity with each album they put out. Simply put, Unden!able is Heavy Metal with Groove elements with the addition of a more darker, Industrial flavor throughout. It will be interesting to see Hellyeah perform material from the album on their current tour seeing the amount of backing tracks used in the fabric of the recording. With that said, Unden!able is another step forward for Hellyeah. CrypticRock gives this album 4 out of 5 stars. 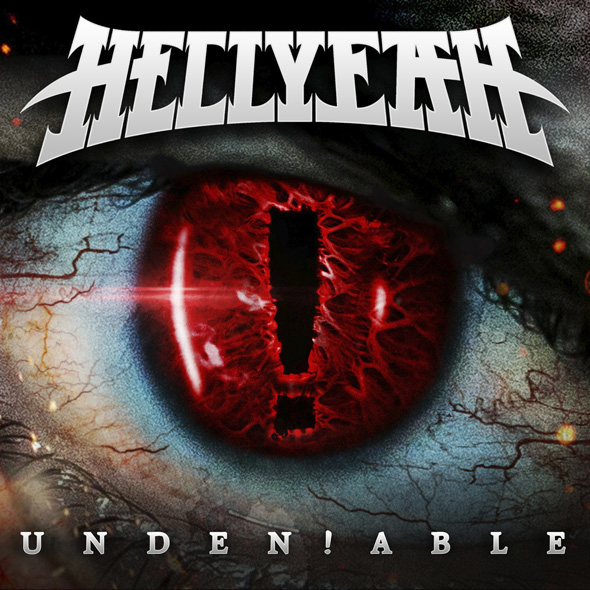