Henry: Portrait of a Serial Killer takes the viewer along for a brutal ride through a few days in the life of Henry (Rooker). The film opens with a slow zoom out of a bloody dead woman, followed by Henry eating at a diner. After Henry leaves said diner and gets in his car, the viewer is taken back into the diner to see the aftermath of another violent rampage resulting in two dead bodies, both shot in the head. As the camera pans over the bodies, the distorted screams of the victims are heard. From there, it only gets more violent. A woman is shown on a toilet with some of her clothes torn off, and a broken bottle neck jammed in the side of her mouth and throat with the same slow camera pan and distorted screaming. Henry then picks up an attractive woman hitchhiker carrying a guitar and drives away.

Next, the viewer is introduced to Becky (Arnold), a sorry-looking blonde with sparkling blue eyes, sitting in a bus station, noticeably distraught. In walks her brother, Otis (Towles), a particularly unsavory character. In Otis’ car, she tells him that she is on the run from her abusive husband and that she dumped her little girl with her mother. Back at Otis’ apartment, he and Becky are drinking some coffee, and in walks Henry with the guitar, but no hitchhiker. When asked about where he got it, Henry simply replies, “I picked it up.” Becky is introduced to Henry and is smitten right out of the gate. 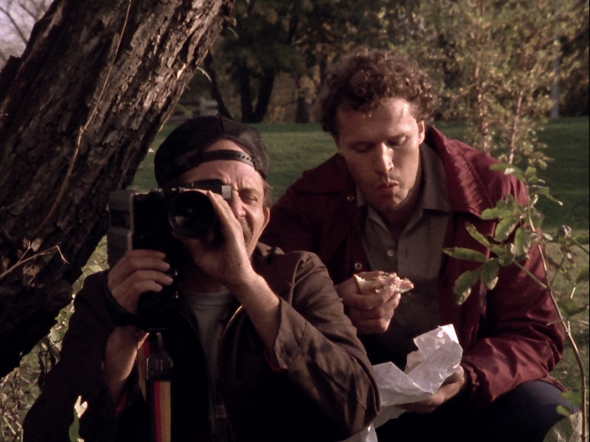 Later, Becky is gutting a fish for dinner while Otis is plucking the guitar and she starts asking about Henry. Otis tells her he met him in jail. She asks what he was in for, and Otis avoids the question. Becky pressures him, and Otis tells her that Henry killed his mother. After dinner, Otis leaves Henry and Becky alone. They start playing cards and Becky asks Henry about his father and such. Then she completely opens up about how her father molested her. After a moment of silence, she asks him if he really killed his mother, and Henry goes into the gory details. Becky says she feels like she’s known him forever.

The next day, Becky goes out into the city and finds a job. That night after dinner, she hands Otis a beer and he grabs her arm like he is going to make a move on her, and Henry grabs Otis by the hair and makes him apologize to her. After dinner, Henry and Otis go out and meet two prostitutes. In the back alley, things start getting rough, and Henry snaps his girl’s neck, then the other’s while Otis holds her. Otis is understandably freaked out, and Henry calmly explains the way things are: “It’s either you or them.”  What follows is a torrent of violence that no character can escape.

With a budget of approximately one-hundred eleven thousand dollars, Henry: Portrait of a Serial Killer was shot on 16mm over twenty-eight days in 1985 around Chicago and Northbrook, IL. In order to keep costs low, friends and family of the production crew were used as extra’s and dead bodies. For example, the dead couple in the bar at the start of the film are the parents of director John McNaughton’s best friend, and the bar was where McNaughton once worked.  Mary Demas (The Naked Face 1984), a close friend of McNaughton’s, played three different murder victims: the woman in the ditch in the opening shot, the woman with the bottle in her mouth in the toilet, and the first of the two murdered prostitutes. The four women Henry encounters outside the shopping mall were all played by close friends of McNaughton. Even Executive Producer Waleed B. Ali made an appearance in the film as a clerk towards the end of the film. The budget was so tight, that the jacket that Michael Rooker wears is his own, and was his only jacket at the time. Just about anytime he removes it, something nasty is going to happen because, he did not want to get blood all over his jacket.

Henry: Portrait of Serial Killer is loosely based on the exploits of real life serial killer, Henry Lee Lucas, who, while incarcerated, confessed to over six hundred murders. While the film is based on a few of  these confessed murders, they turned out to be false. Lucas said that the false confessions led to better conditions for him in prison, as law enforcement offered him incentives to confess to crimes he did not commit. In real life, Henry met Ottis Toole, who was a male prostitute, in a soup kitchen in Florida. The character of Becky was based on Toole’s twelve year old niece. Her name was Frieda Powell, but she preferred to be called Becky, and was sexually abused by Henry for years. 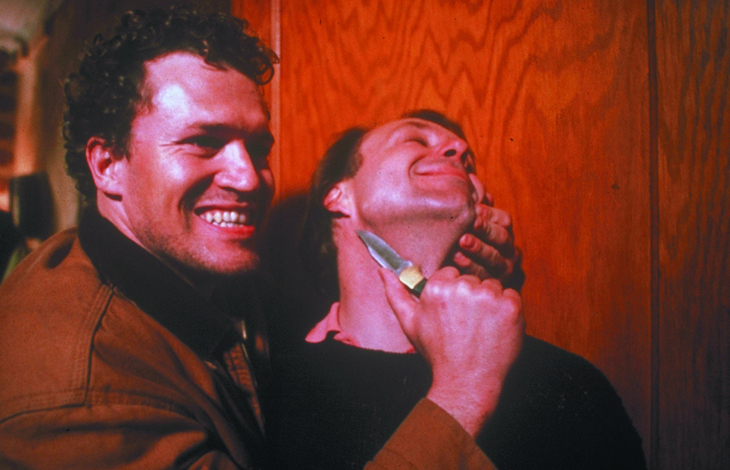 Michael Rooker gave Henry all the charisma of a rabid electric eel. He was so cold and unfeeling, that the viewer could swear they were watching an actual serial killer at work. Any time he was faced with a sexual situation, the viewer can see his face sort of…contort, like he is mentally curling up into a ball; all thanks to his mother. Even when Becky confesses her love for him, Henry cannot deal with it in a normal way. There was no other way one could play a part like Henry; he was a monster, plain and simple. Rooker remained in character throughout the duration of filming, even off set. He would not associate with cast or crew, and he was the only one that got his own dressing room. According to costume designer Patricia Hart, she and Rooker would travel to the set together each day, and she never knew from one minute to the next if she was talking to Rooker or to Henry as sometimes he would speak about his childhood and background not as Michael Rooker but as Henry. Indeed, so in-character did Rooker remain, that during the shoot, his wife discovered she was pregnant, but she waited until filming had stopped before she told him.

Tom Towles’ Otis was sort of the comic relief to Henry, but Otis soon brings his act to the killing game adding a perverted side to it all, to Henry’s dismay. Finally, Tracy Arnold played Becky perfectly, as she understood that Becky was damaged goods. She’s the flower in a shit pile that can’t find her way out. Even after Henry tells her that he killed his mom, and lied about the way he did it, she still loved him. In her own pathetic way, she is just as much a scumbag as Henry and Otis, though she’s only mentally killing herself.

The dark and brooding score by Ken Hale, Stephen A. Jones, and Robert McNaughton is almost a character in itself, as it is intermingled with all the screaming of Henry’s victims, specifically at the beginning when the viewer is taken on a murder tour. There are also some Rock songs provided, but none so poignant as the song “My Mistake (For Loving You)” by Lynne and the Lizards, as it plays right after Becky tells Henry she loves him at the end of the film.

After the filmed wrapped in 1985, it was shelved by Executive Producers Waleed B. Ali and Malik B. Ali due to their being underwhelmed by the final result. As mentioned above, Henry: Portrait of a Serial Killer did get viewed at film festivals, where it garnered a cult following and critical praise, but it still did not even see a limited theatrical release until January 5th, 1990.

All in all, this is a well made film, though it is not for the faint of heart, or even the most casual of Horror viewers. Anyone who has seen it would agree. Buckcherry guitarist Keith Nelson has even said, “The most disturbing film I have seen, Henry: Portrait of a Serial Killer, it literally gave me nightmares for a long time afterwards.” With its stark depiction of brutality and encapsulating the almost clinical pathology of a serial murderer, Henry: Portrait of a Serial Killer is just as terrifying today as it was thirty years ago. 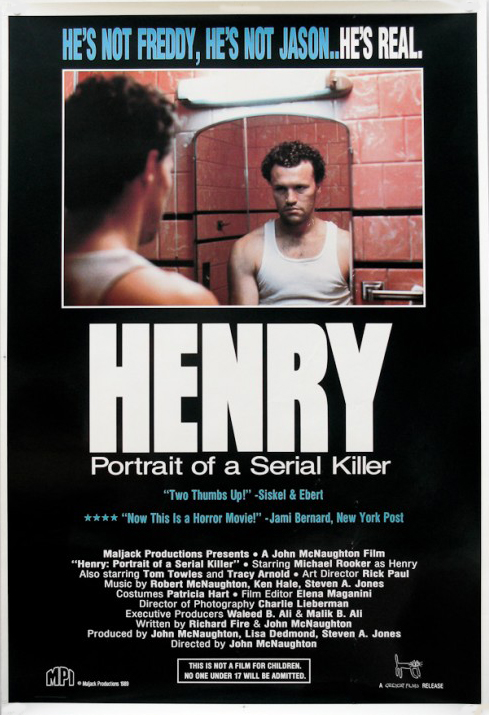 Purchase Henry: Portrait of a Serial Killer on DVD on Amazon