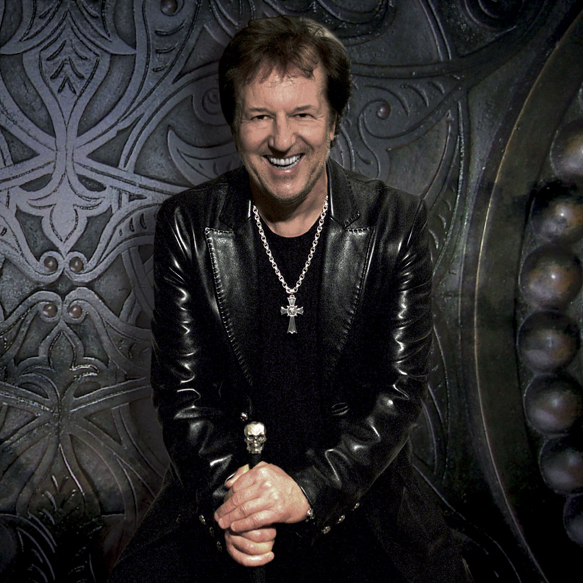 Sometimes history needs to be retold for people to truly understand something. Sometimes people do not understand the detail of it all, thus making the re-visit to the past that much more essential. This never could be more true than with legendary Rock-n-Roll drummer Herman Rarebell. Rarebell, best known for his time behind the drums for German Rock giants Scorpions between 1977 and 1995, picked 2015 to re-invent many of the huge hits he helped to compose with the assistance of some well-known friends on a new album entitled Herman’s Scorpions Songs. Without question, Rarebell’s eighteen years comprise the height of the Scorpions’ fame, and his presence and contribution to this success was no mere luck of the draw. For an album like this, there are a great list of songs to choose from, many of which were either partially or fully credited to Rarebell for both lyrics and composition. Seeing as how the Scorpions are celebrating their fifty years in music, his timing is perfect to dust off some of their biggest hits.

Those fogging on the history of Rarebell, since leaving the Scorpions he founded his own label, Monaco Records, with real royalty in the form of Prince Albert of Monaco himself. He released albums under his solo project and, more recently, with Herman Ze German, as well as participating in a Drum Legends project, and is currently working with fellow legend Michael Schenker a part of Temple of Rock. With Herman’s Scorpions Songs, he gives fans a new perspective. There is no question part of the appeal of the Scorpions was always the distinctive and charismatic vocal style of  Klaus Meine, so to hear the songs sung by others is interesting. Some listeners may feel that a handful of these well-chosen vocalists try to emulate Klaus’s style, while others opt for giving their respective songs their own unique flavor. This is the second time these vocalists have been asked to participate in such a project, the first time being for Rarebell’s Acoustic Fever album in 2013. Sticking with the same songs, they now go full production on the tracks. Michael Voss supplies his guitar talent to the project, while Herman takes up his role on the drums throughout, with Corey Whitehead playing Flamenco style guitar.

Starting off with one of the biggest hits from the Scorpions, the unmistakable “Rock You Like A Hurricane” features Toto vocalist Bobby Kimball. It may be because he is attempting a German accent, but this does not sound like Kimball, although the performance is so strong that it still works. “Rules The Game” features John Parr; best known for his huge hit with “St Elmo’s Fire.” A good fit, Parr’s husky vocal delivery gives it a sexual tension that conveys the passion. Then there is “Loving You Sunday Morning” with Michael Voss, vocalist of Casanova as well as Mad Max, and it is a delightful rendition with a real ’80s vibe, along with crisp clean guitars that give it some punch. Then comes “Is There Anybody There” with Alex Ligertwood (the singer for Santana for many years). This recording has a real groove and strong beat, raunchy and infused with a Reggae vibe, along with a Latin-American undercurrent and a dark mysterious sway.

Moving along, “You Give Me All I Need” features famed Dokken vocalist Don Dokken, which is Classic Rock to the core. Sensational guitar work gives the song heart while Dokken’s smooth vocals envelop the listener in nostalgia. Doogie White (singer in Rainbow, Yngwie Malmsteen’s Rising Force, Michael Schenker Group, and many more bands) brings his style to “Make It Real,” a song with plenty of drive. Thereafter is “Dynamite,” which is sung by Johnny Gioeli (Hardline, Crush 40, and Axel Rudi Pell’s band). For this song, the recording comes out a little less Rock and more Metal, heavier and full speed at times. Most of the singers are legends in their own right, but taking on “Arizona” is Thomas Perry, who seems to be an enigma. He makes a fine job of the song, making him a worthy listen. Right after, and keeping the album flowing nicely, is Paul Shortino (Rough Cutt, Quiet Riot, and King Kobra, amongst others) tackling “Love Is Blind” in gritty, gravelly tones with a powerful yet dramatic approach.

Great White vocalist Jack Russell takes on “Don’t Make No Promises” and he  manages to pull off a fine German accent for an American. Nonetheless, the song really suits him and it is one of the few where it matches the original for quality. “Falling In Love” with Gary Barden (best known for Michael Schenker Group and Praying Mantis), is a song with plenty of energy, sung with gusto, but not much finesse. Taking on “Another Piece of Meat” is former Black Sabbath vocalist Tony Martin with his high vocals giving the cut a more Metal feel. Nineteen-eighty’s “Animal Magnetism” with Michael Nagy, who is another unfamiliar name, really captures the song. The Flamenco guitar coupled with the heavy riff really works. It has an immediacy, beauty, and captivating sensuality.

Finally comes a new composition, “Let It Shine,” which is sung by Unbreakable vocalist Al Crespo. A vocalist Rarebell has worked closely with producing Unbreakable’s album, his belief in Crespo is strong and fans can see why with this orchestral arranged song. Crespo puts on a stunning performance. Almost Boy-band in style in the choruses with its harmonies, there is no need to worry, Rock has a very strong future if Crespo is the standard of what is to come.

There are some really fine performances here, some absolute great stars of the past giving it their all, and it is great to be reminded of some killer songs. However, the majority, good as they are, are not on a par with the originals, but no one said they were meant to be. Above all, this collection gives listeners insight into how important Rarebell was to the success of Scorpions, having penned the lyrics to many of their biggest hits. All in all, this is a great listen that will see many fans breaking out their vinyl copies of Scorpions classics, and reminiscing about the old days when Rock ruled! CrypticRock gives Herman’s Scorpions Songs 4.5 out of 5 stars. 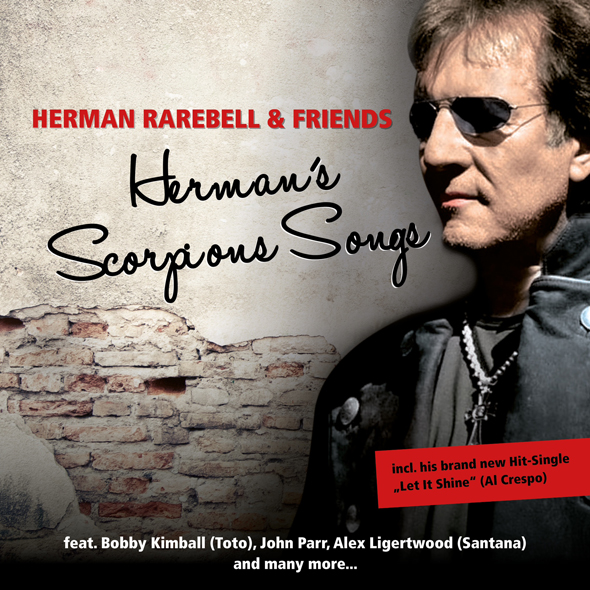