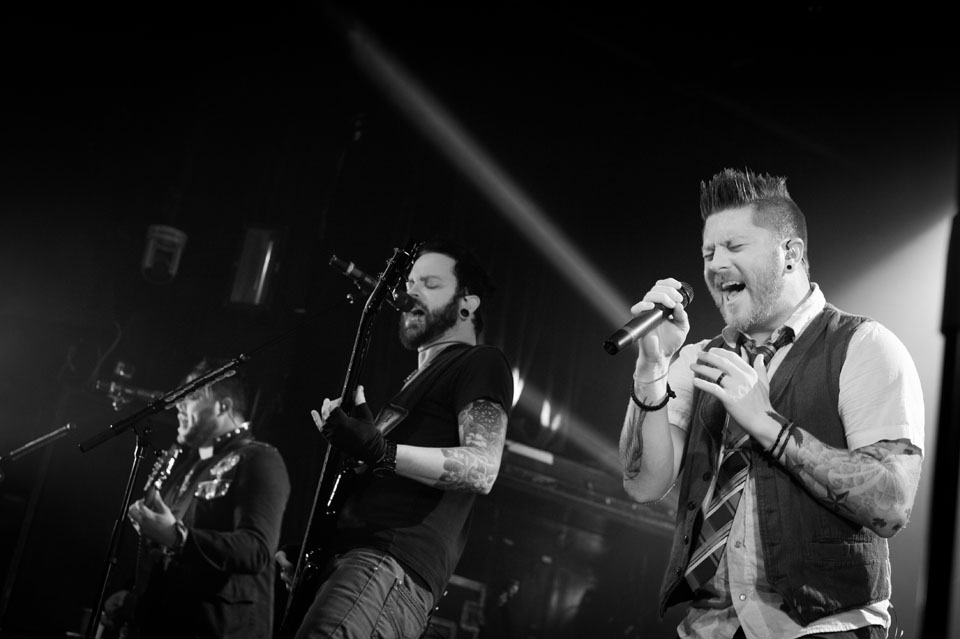 On Thursday September 26th Hinder, Candlebox, Devour The Day, and Open Air Stereo performed at Irving Plaza in NYC.  The 4 band bill rock n roll show started out at 7:30 PM and would prove to be an fun evening for rock fans of all ages.

Starting out the evening were Southern California alternative rock band Open Air Stereo.  Having been out on tour with Candlebox for over a month now, Open Air Stereo continues to be direct support.  Fronted by Chase Johnson which many remember from MTV’s Laguna Beach: The Real Orange County, Open Air Stereo provides a unique blend of rock, pop, and melody.  Having been together for nearly 11 years now, the band is a tight knit group of musicians with a strong stage presence as well.  They treated fans and potential new fans to an exciting opening set of tracks from their newest album Primates (2013). With tracks that create a warm full sound of guitar, vocals, and explosive percussion Open Air Stereo reminds us of a unique alternative rock band of yesteryear.

Next up were Memphis, TN based hard rockers Devour The Day.  Being no stranger to the hard rock scene, Devour The Day is the shiny new project featuring Blake Allison (vocals/guitar) and Joey “Chicago” Walser (bass) formerly of Egypt Central.  Having reached a respectful amount of success with Egypt Central the new band mates decided to start over after internal issues with the band.  With a fresh start you get a few different feelings, one a feeling of fear of the unknown and two, a feeling of making something even more special than before.  Devour The Day has done the latter with the release of their debut album Time & Pressure (2013) .  With Allison originally being behind the drum kit in Egypt Central he has made a smooth transition to vocalist and front man in Devour The Day.  Showing off heavy catchy guitar riffs, strong vocals, and powerful lyrics Devour The Day light up the stage.  Their single “Good Man” is only the tip of the iceberg of what these guys have to offer.  With a great blend of melody, heaviness, and clarity their set proved to shine.

With a large crowd of rock fan’s blood flowing, the 1990’s alternative rock giants Candlebox hit the stage.  Kevin Martin (vocals), Peter Klett (lead guitar), and Scott Mercado (drums) make up the core three members of Candlebox.  Having gone on hiatus for 6 years the three reformed in 2006 with new additions Sean Hennesy (rhythm guitar) and Adam Kury (bass).  Back together for 7 years Candlebox have released two solid full length records in that time.  With looking toward the future but celebrating the past Candlebox has been out on a year long tour celebrating the 20th anniversary of their debut album Candlebox (2013).  Having built a massive fan base over the years fans rejoiced as Candlebox performed 7 tracks off of Candlebox (1993) in an 11 song set. With emphasis on the landmark album, Candlebox mixed in a variety of tracks from Into The Sun (2008) and Love Stories & Other Muses (2012).  Martin belted out a soulful performance and kept the crowds attention with his charismatic stage presence.  With excellent performances of all songs, stand out moments were the excellent performances of “Cover Me” and “Don’t You”.  The guys closed out their set with their most recognized song “Far Behind”.  Even if you have heard this song an extensive amount of times it still is powerful 20 years later.  Candlebox sounds better than ever and energy levels on stage are equally matched.

Closing out the evening were Oklahoma City based modern rock band Hinder.  With 12 years on the rock scene, Hinder has made a good name for themselves.  With 4 solid records the band continues to rock and rock hard.  Most recently their unique front man Austin Winkler took a leave of absence from his duties in the band to conquer his addiction.  Cryptic Rock wish Austin well, a speedy recovery, and hope to see him back with Hinder soon.

Faced with the dilemma of being without their vocalist Joe Garvey (guitar), Cody Hanson (drums), Mark King (guitar), and Mike Rodden (bass) recruited Saving Abel front man Jared Weeks.  A rock veteran in his own right, Weeks has a strong singing voice which has been displayed on 3 albums with Saving Abel.  Ready to rock, Hinder opened up with the party like track “Up All Night” off Take it to the Limit (2008).  With a high energy performance the band performed a good mix of newer and older tracks including the newer track “See You In Hell” off Welcome to the Freakshow (2012).  Garvey put on an excellent display of guitar work with ripping solos filled with energy and passion.  With Weeks on vocals Hinder even mixed in a few Saving Abel tracks including “The Sex Is Good” and “Addicted”.  Humbled at the chance to play with Hinder Weeks put on a very strong vocal performance which provided the audience with a great experience.  The height of the experience was when the band closed out with two of their most popular tracks “Better Than Me” and “Get Stoned”.  Weeks voice soared and put any skeptical fans reservations to rest by the end of Hinder’s strong performance.