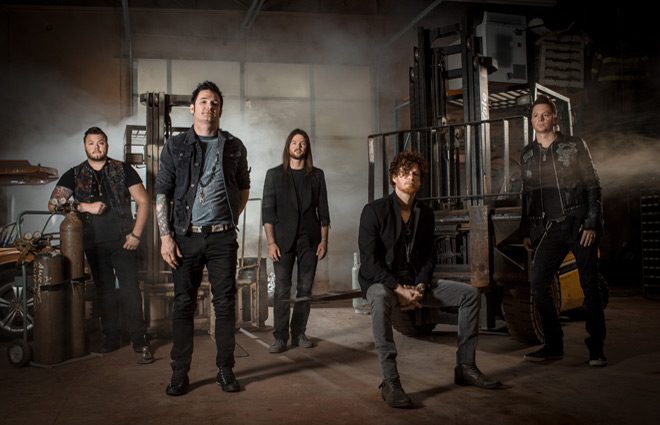 A lot has changed since Hinder formed as a band in 2001. Initially put together in Oklahoma by Vocalist Austin Winkler, Guitarist Joe Garvey, and Drummer Cody Hanson, following four successful albums, from their debut in 2005 Extreme Behavior to 2012’s Welcome to the Freakshow, Winkler exited the band into rehab. Leaving the future of the band in limbo, after shuffling through a couple of replacement vocalists, former Faktion frontman Marshal Dutton arrived to take the band forward. No stranger to Hinder, having worked with the guys as a producer, and even filling in for live shows over the years, his 2015 studio debut When the Smoke Clears went over well with fans and now he and Hinder return with the follow-up The Reign.
Inducted into the Oklahoma Music Hall of Fame in 2007, the 2017 lineup is completed by Guitarist Mark King and Bassist Mike Rodden. Touring with bands such as Papa Roach, Buckcherry, among others, after years a part of Republic, Hinder have comfortably found a home with The End Records. Taking a bit of a new direction, The Reign offers a promising future for the resilient band.
Eleven tracks in total, the title-track sets the benchmark, defining the sound that characterizes the entire album. It has a  fine quality and smooth vocals, instantly accessible, making it the sort of track that seeps into your psyche and remains there. Catchy and rhythmic with a hypnotic vibe that hooks you in, the tempo captures your attention and exudes an energy that you cannot ignore. Moody and sultry, “Burn It Down” is a slower, dramatic and brooding number. It is a heartbreak song, full of revenge and bitterness, with emotional impact and intensity. Then, a rich melody and addictive groove gives “King Of The Letdown” an irresistible force while self deprecating lyrics and a harmonious gang chorus present a classic anthem. Matched with a delightful breakdown, it will make for a thrilling live song.
Moving on, lead single, the haunting “Remember Me,” is philosophical and bleak, with a futuristic soundscape underpinning a sense of doom. This is before the plaintive “Too Late” begs for hope and salvation with a strong melody that has a country twang which is unexpected. Hoping for more, you have to wait for your answer until “Another Way Out,” which provides the hope and salvation asked for. A high energy rebellion of a song, a stand and fight anthem for the lost and forgotten, it is something that should connect with many, giving a positive answer in a negative time.
“Making It Hard” is a wry smile of innuendo with a cheeky wink. A fun track about a woman in control, Dutton is not complaining on the song that is along the lines of Mötley Crüe or KISS in the ’80s but only with a little bit of sleaze without crossing the line. Crossing from the fun, sexy side to drinking in the gutter to forget a broken heart, “Drink You Away” ends very abruptly, but in its brief appearance, it delivers a stunning Blues Rock song.
Thereafter, a fiery attitude and bitter contempt defines “Play To Win,” a track that deals with finding out that a relationship is founded upon lies and the revengeful side that is revealed as a result. The opposite sense is evident in “Long Gone,” which is filled with regret and longing. A love gone bad vibe, it is an excellent Pop song, passionate and ethereal. Then, the final track is the mocking parody “Loser’s Salute,” which takes a downward spiral and looks on the bleak side of life, but in a way that will make you smile. A fitting end to an album of diverse tunes and styles, Hinder refuse to be put into any specific genre box, preferring to stomp across them all, mixing soft Rock with hard.
The Reign is the sort of album that you cannot resist another listen to. It will become a firm favorite on playlists, with a superb quality and a great mix of moods. It has an addictive streak that leaves you wanting more. Those still new to Dutton, his vocals are finer than Winkler’s and his style could help The Reign’s tracks become a staple go-to for Hinder fans. That said, Hinder are certainly on form with this offering and they should win a lot of credibility as well as new fans. For these reasons, CrypticRock gives The Reign 5 out of 5 stars. 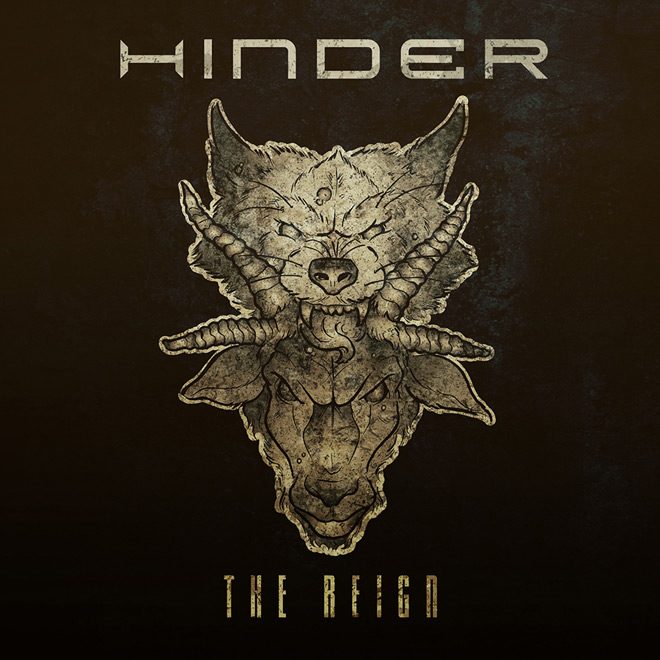