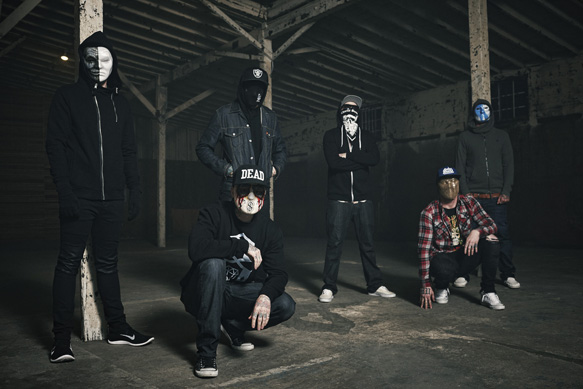 Often pigeonholed to the Nu-Metal genre, the Los Angeles/California based band Hollywood Undead surely have much more to offer than what some may think. Since their first and highly praised sound-effusions, self-released on the band’s Myspace page back in 2005, they were soon signed to A&M Octone Records. The release of their platinum-certified debut Swan Songs in 2008 found the album immediately climbing the Billboard 200 charts to position 22. This masked, gangsta six-piece consists of Daniel “Danny” Murillo, Jorel “J-Dog” Decker (vocals/keyboards), George “Johnny 3 Tears” Ragan (vocals/bass), Dylan “Funny Man” Alvarez (vocals), Jordan “Charlie Scene” Terrell (vocals/guitar), and Matthew “Da Kurlzz” St. Claire (vocals/drums). Continually rising, their additional studio albums American Tragedy in 2011 and their most successful charted album in 2013, Notes From The Underground , both approached gold status and bestowed sold out shows, along with worldwide touring with everyone from Avenged Sevenfold to Stone Sour. After A&M Octone Records was purchased by Interscope-Geffen in 2013, Hollywood Undead did not spend a lot of time lingering the inevitable changes, but pulled their socks up to write their 2015 album Day Of The Dead.  Teaming up with long-time producers Griffin Boice and Sean Gould, the wait for Day Of The Dead is over, after the initial October 2014 release was pushed back to March 31st of 2015.

The opening song, “Usual Suspects,“ immediately wins over listeners’ ears with its radio compatible chorus and rap-verses reminiscent of the early days of when Hollywood Undead began a decade ago. Immediately thereafter, “How We Roll” showcases another style with a monstrous, murderess groove. This is accompanied by the well-known rap-flows as well as a heavy drum and bass influence which is destroyed and smashed to the hard hitting chorus. The perfect mixture of everything Hollywood Undead is comes together on lead single and the album title track. While the song was many fan’s first introduction to the album, it may not be the clearest interpretation of the vast diversity the band brings forth this time around, although it is a great teaser. The aforementioned drum and bass elements twinkle in many songs throughout Day Of The Dead. Also, the electronic and programmed details remind often of a mixture somewhere between modern Pop acts like The Black Eyed Peas, The Pussycat Dolls, or Lady Gaga. While this is a circumstance some less open-minded fans may not understand, in truth, these elements give Day Of The Dead the diversity which set Hollywood Undead apart from other typical Rap-Rock acts, impressive proved by the Pop drum sound, Trance keyboard and vocoder, vocal-driven “War Child.”

Showing their Hip Hop face, songs such as “Dark Places,” and especially the heavy “DEITWHTFD,” which may remind some a bit of Eminem, and are so lyrically ballsy that they demand attention. Meanwhile, “Take Me Home” is clearly controlled by its compelling, martial drum beat. “The Disease” reflects influence from Marilyn Manson’s “The Beautiful People” in the whole song structure and verses, but harnesses the band own originality. It would be easy to quote all fifteen songs off Day of the Dead, which is comprised of a dynamic range of Metal, Rock, Pop, and Rap, but one that has to be mentioned is the Country-Pop song “I’ll Be There” with its sickly sweet chorus.  With a lot of potential single hits like “Gravity,“ “Live Forever,“ or the wonderful ballad “Save Me,“ Hollywood Undead guarantee goose-bumps and substantiate that they are a band in a premier league.

Fans who were afraid Hollywood Undead could release a paint by numbers Rock-Rap album can breathe a sigh of relief. Day Of The Dead is a whole clutch of great songs influenced by their experiences and broaching the issue of what life is about.  Day Of The Dead keeps the recipe that Hollywood Undead fans love, but all while interjecting some fresh sounds as well. Some may say it could be the most radio compatible mainstream album by Hollywood Undead to date, but that is perfectly fine, because the crystal clear and powerful Metal sound makes this record a balanced winner. CrypticRock gives Day Of The Dead 4.5 out of 5 stars. 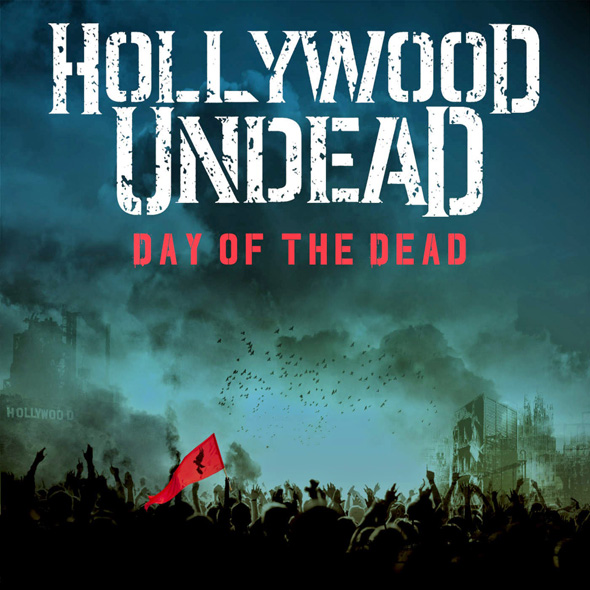