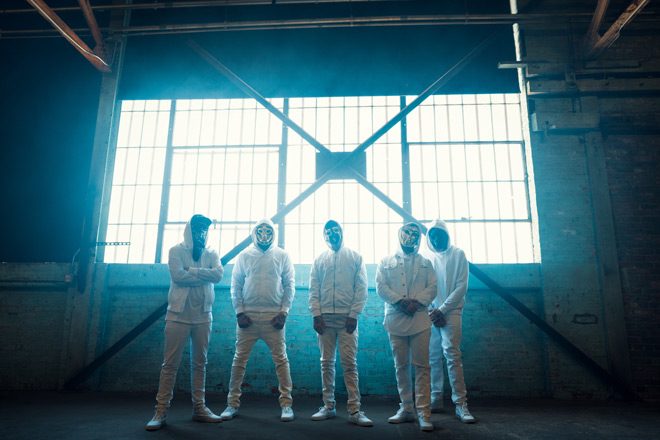 The masked mayhem continues with Hollywood Undead and Five, available Friday, October 27, 2017  thanks to the group’s own Dove & Grenade, distributed through BMG.

Los Angelinos Hollywood Undead formed in 2005 in, well, the apropos Hollyweird. A brash blend of Hip Hop and Metal, Rap and Rock, the quintet originally got their start on MySpace, of all places. Over the past twelve years, they have released four studio albums – from their 2008 debut Swan Songs to 2015’s Day of the Dead – earning themselves a reputation throughout varying musical circles and garnering the dedication of a diverse fanbase.

Five kicks off to superbly infectious first single/video “California Dreaming.” Leaning heavier towards Rock, there is a kind of Prog Rock intro that barrels the band into delightfully catchy, anthemic choruses that proclaim: “I’m no shooting star / Just a burning heart / We never sleep / In California, we’re dreaming.” Second single/video “Whatever It Takes” sees Charlie Scene evoking Eminem on the Rap of his verses; though when he actually sings his voice goes into a deeper timbre that is ominously seductive, a promise that he and his bandmates will do whatever it takes to make it.

Danny’s soaring R&B-flavored vocals lead the stellar “Bad Moon” sky-high; this is Hollywood Undead at their most infectious and radio-friendly. In fact, recognizing their strengths for what they are, the quintet continue with Danny front-and-center on the R&B-tinged “Ghost Beach.” In this bittersweet ode to a city undergoing massive change, he inquires: “Where’s L.A.? Whatever happened to the city we knew?”

Charlie Scene kicks off the gritty, Hip Hop of “Broken Record,” where there is a harsh dichotomy between Rap verses and saccharine choruses. It flows perfectly into “Nobody’s Watching,” where Danny steps up yet again to implore the group’s listeners to sing like nobody is watching. Motivational Hip Hop and R&B – with a covert Beatles’ reference! – collide in this gorgeously done duet that sees J-Dog and Danny leading the group into a superbly radio-friendly anthem of empowerment.

While it does not hold the same lyrical power as its predecessor, “Renegade” is the skull-crushing kick in the face that is needed to pump Hollywood Undead back up to 11. They follow this into darker, grittier Hip Hop territory with “Black Cadillac,” with a deliciously low and seductive Funny Man leading the charge while B-Real gets the bitches begging for backstage passes. Afterward, Johnny 3 Tears steps up to lead the group in “Pray (Put ‘Em In the Dirt),” another embrace of the heavier side of Hollywood Undead, which segues into the Hip-Hop experience of “Cashed Out.”

Electronica meets Hip Hop on “Riot,” a party anthem for fucking shit up with your homies. Meanwhile, another anthemic embrace of the night, “We Own The Night,” presents a darker, more guitar-fueled approach to the party and, as if to prove their Nu Metal roots, Danny soars very close to the incomparable Chester Bennington on these choruses. “Bang Bang” also leans heavier toward the Rock approach and leads flawlessly into album closer “Your Life,” ending the collection with a heavy injection of the Rap-Rock that is guaranteed to remind fans that Hollywood Undead can bang their heads with the best of ‘em!

On Five, there is a lot of dreaming, quite a few notions of California, a pinch of misogyny, and many a mofo, as well as a decided lean toward the group’s Hip-Hop stylings. (Which explains a lot of the aforementioned!) If you can accept them at (masked) face value, the truth is, they are often superbly catchy; blending a motley array of sounds flawlessly to create something that is wholly Hollywood Undead. In a time when few acts can truly claim to be original, Hollywood Undead lead the cattle charge of bizarre blends that somehow work beautifully. Kudos to the masked mayhem! CrypticRock give Hollywood Undead’s Five 4 of 5 stars. 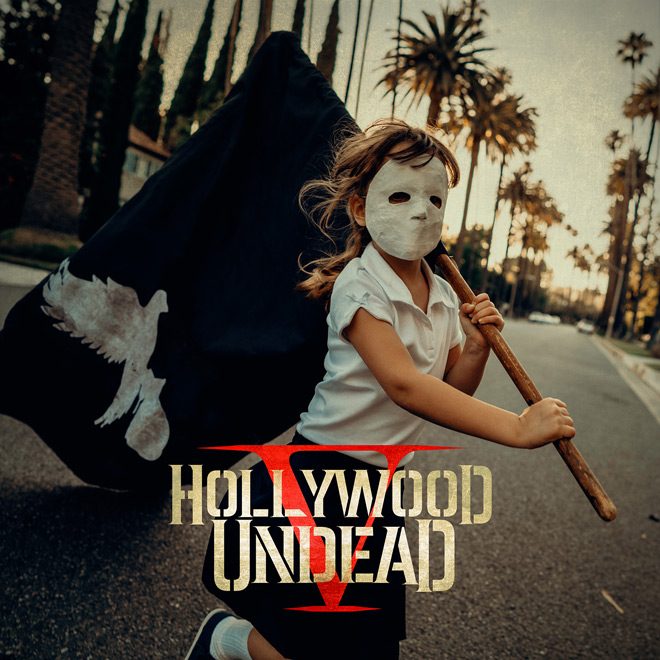