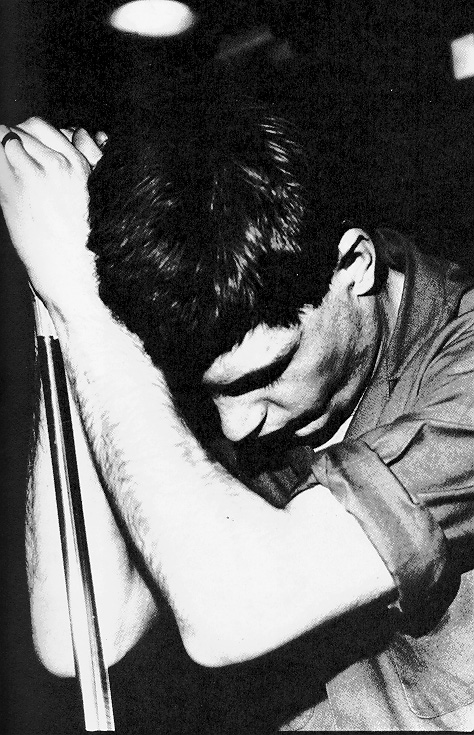 33 years ago today the world lost one of the most unique singers and lyricist in Ian Curtis of Joy Division.  Although not known by many Ian Curtis and Joy Division have left a lasting impression on rock music.  A pioneer in the New Wave rock scene forming in 1976 in Salford, Greater Manchester England originally known as Warsaw.  Shortly after the band changed their name to Joy Division and today are known as the founders of Post-punk.  Joy Division were a moody dark atmospheric rock band having a lot to offer the listener.  Fronted by Ian Curtis, a complex artistic soul with deep emotional thoughts.  He was known for his baritone voice,  unique dance style, and songwriting filled with imagery of desolation, emptiness and alienation.  Ian’s despair was not phony by any means having suffered with epilepsy later in his life.  Ian poured his soul out to the listener each time he performed on stage.  His lyrics were most definitely written from deep seeded emotions and not merely just for show.  The band was well on their way with the success of their albums “Unknown Pleasures” and “Closer”.  Their single “Love Will Tears Us Apart” was their highest charting release.  The song is still heard at clubs everywhere and has been covered by countless bands. Tragically Ian took his own life at the age of 23 on the eve of Joy Division’s first North American tour, resulting in the band’s dissolution.  Surviving members later formed the legendary New Wave band New Order.  It’s evident that Joy Division influence covers a large spectrum of well known rock bands.  Bands such as The Cure and U2 have dedicated songs to Ian Curtis.  Post-hardcore emo band Thursday have a song entitled “Ian Curtis” on their first album Waiting.  The list of bands influenced by Ian Curtis in modern rock is endless.  It’s evident that he still strikes a chord in the heart of many with his unique style of singing, his stage presents, his deep dark lyrics, and mysterious persona.   Cryptic Rock love Joy Division and appreciate Ian Curtis’s artistic genius.  R.I.P. Ian Curtis although I never knew you you’ve touched my soul deep within 1956-1980.