A fairytale that has been a part of culture for over a century, the story of Peter Pan captures the youthful spirit in all of us. Begun with the 1904 play, Peter Pan or the Boy Who Wouldn’t Grow Up, perhaps the most associated imagery of the story comes from the 1953 Disney animated film. A film that every man, woman, and child continue to watch, nearly forty years later, Steven Spielberg brought the tale into the modern world with the 1991 live action film Hook. 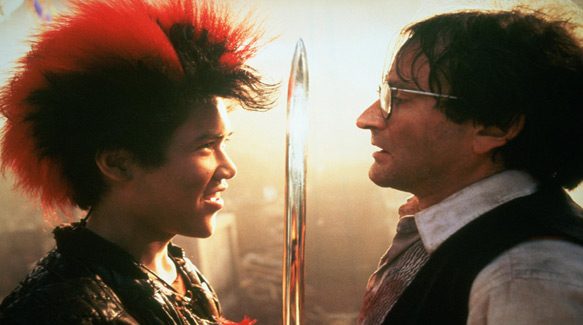 A film that was actually in development since the early ’80s, it was set to follow the storyline of 1924 Silent Film, and the aforementioned 1953 animated Disney classic. With Spielberg joining on to direct in 1989, TriStar Pictures would have the honor of distributing the film in place of Paramount Pictures, and on December 11th of 1991, Hook came to life in theaters everywhere.

He, his wife Moira (Caroline Goodall: Schindler’s List 1993, The White Queen TV series), along with their children – 12-year-old Jack (Charlie Korsmo: Dick Tracy 1980, Can’t Hardly Wait 1998) and 7-year-old Maggie (Amber Scott: debut film) board a PanAM flight from America to visit Grandmother Wendy Darling (Maggie Smith: The Prime of Miss Jean Brodie 1969, Harry Potter series) in London. Although his family pleads with Peter to pay attention to them all, his work as a corporate attorney holds a strong grip on Peter’s type-A personality.

In England, the Darling household embraces the Bannings with love. With the children nestled into the nursery for the night, Peter and Moira attend a banquet honoring Wendy for her extensive charity work at The Great Ormond Street Hospital. Peter gives a touching speech, and several gentleman in attendance express their gratitude for Wendy’s selfless contributions to their lives. 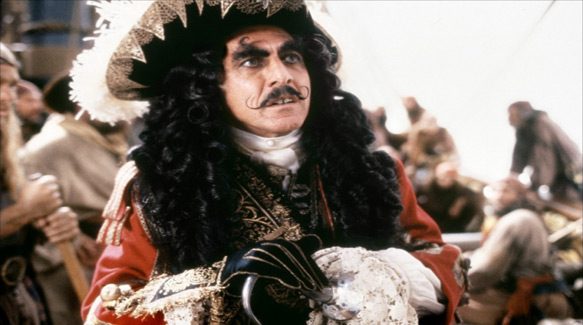 Once they return to the Darling residence, though, they find trouble. Someone abducted the children. The housekeeper Liza (Laurel Cronin: Beethoven 1992, A League of Their Own 1992) was injured during the attack, and Tootles (Arthur Malet: Mary Poppins 1964, Toys 1992) reports the culprit is none other than the infamous Captain James Hook (Dustin Hoffman:  Toostie 1982, Rain Man 1988). A deep gouge in the wall marks the passage of the intruder, and a note signed by Hook is pinned to the wall with a dagger, calling out Peter to collect his children. In a cameo as a police officer, Phil Collins closes his notes mentioning the family’s literary associations and a possible obsessed fan.

Wendy draws Peter aside and confides a secret she should have told long ago. Peter Banning is really Peter Pan. When he met and fell in love with Wendy’s granddaughter, Moira, Peter left Neverland and forgot his true identity. Peter leaves, certain the abduction has unearthed insanity within Wendy. He retreats with a bottle of alcohol to the nursery where he experiences a “vision” that turns into a reality. From here, the beloved fairy, Tinkerbell (Julia Roberts: Pretty Woman 1990, Erin Brockovich 2000), accosts Peter to take him to rescue his children from Hook and relive his past.

Although filmed almost exclusively on a soundstage in Southern California, Hook engages the senses with playful scenery filled with literary references. That said, it seemed almost just that Spielberg take on the project being the story of Peter Pan held a special place in his heart as a child. Admitting an attachment to the classic story of Peter Pan in his biography by Joseph McBride, Spielberg has stated that before he knew of any super heroes, his first recollections of anyone flying was in fact Peter Pan. Admitting to have a bit of Peter Pan syndrome through his own life, he has stated his mother read it to him when he was a child, and as a youth he produced a school performance of Peter Pan. Moreover, the idea of a dysfunctional father and son relationship is something Spielberg was not unfamiliar with, broaching the subject in 1982’s E.T. the Extra-Terrestrial. 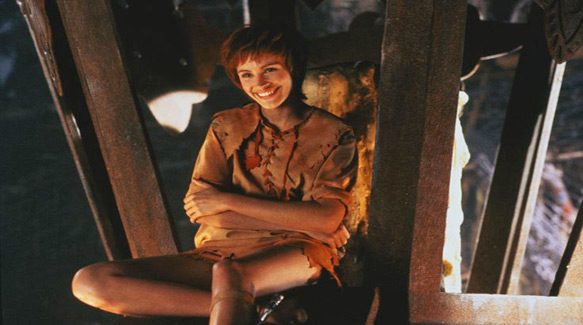 As far as casting, it was fitting to pick the late great Robin Williams to portray an adult Peter Pan. Williams, known for his child-like characteristics in his movies, did a fine job and gave audiences plenty to smile about. Co-starring alongside Dustin Hoffman as Captain Hook, there was a chemistry, despite some critics believing Hoffman’s casting was a misjudgement. Furthermore, Hook was filled with uncredited cameos, making it a Who’s Who for the discerning film enthusiast. For example, Jimmy Buffett, Glenn Close, Carrie Fisher, and George Lucas appear, as does Gwyneth Paltrow, who smiles for the camera as an enthusiastic, young Wendy.

With the screenplay written by James V. Hart, Nick Castle, and Malia Scotch Marmo, there was a ton of talent continuing on the world of Peter Pan. Furthermore, the story gave a fresh, modern look at the character, one that grew up, faced the challenges of adult life, but is thrust back into an adventure. Highly successful in that, Hook went over budget at more than $60 million, but it brought in over $300 million at the box office. Ranked the fifth-highest-grossing Pirate-themed film, behind all the mega success of Pirates of the Caribbean film franchise, Hook was still considered a financial failure, perhaps overshadowed by Disney’s animated Beauty and the Beast released a few weeks prior that same year.

Nonetheless, Hook inspired a ton of merchandising, including a Comic Book adaptation, video games, and action figures. The Academy nominated the film for awards in 5 categories, but other reviewers were not as kind. In fact, Spielberg expressed some disappointment in the film in a 2013 interview on the Kermode & Mayo’s Film Review Show; Spielberg confessed, “I wanna see Hook again because I so don’t like that movie, and I’m hoping someday I’ll see it again and perhaps like some of it.” 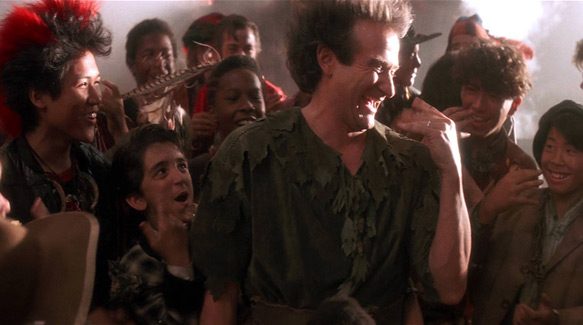 While opinions may be panned, even by the director himself, for any child of the ‘90s, Hook holds a special place in their heart. A fun, imaginative film, it manages to capture a conflict between corporate success and family values. A metaphor for adults who have been sucked into the daily grind, Peter explores his own imagination to recapture not only his youth, but also appreciate the fleeting gift of his children’s wonder-filled affection.

With child-like dialogue and glittery, wind-swept costumes, Hook captures the wonder of Neverland and the magic within the everyday for those willing to embrace happy thoughts and endure a sprinkling of Pixie dust. After all, “To live is an awfully big adventure.” 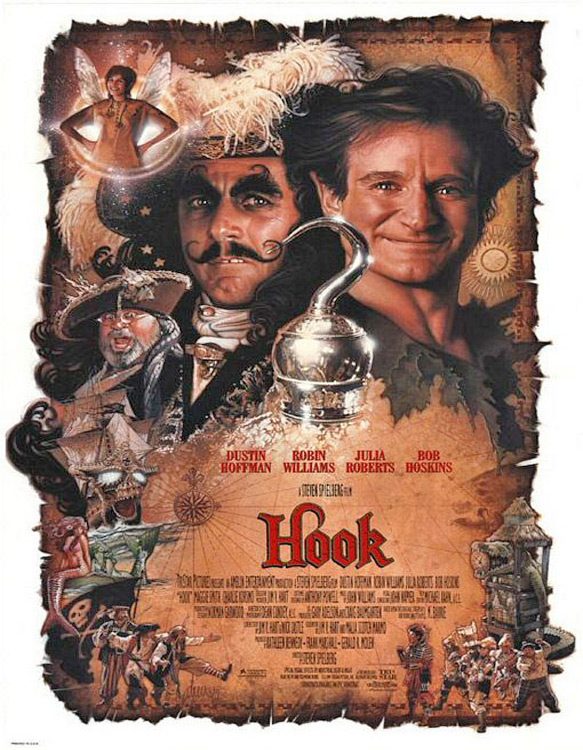